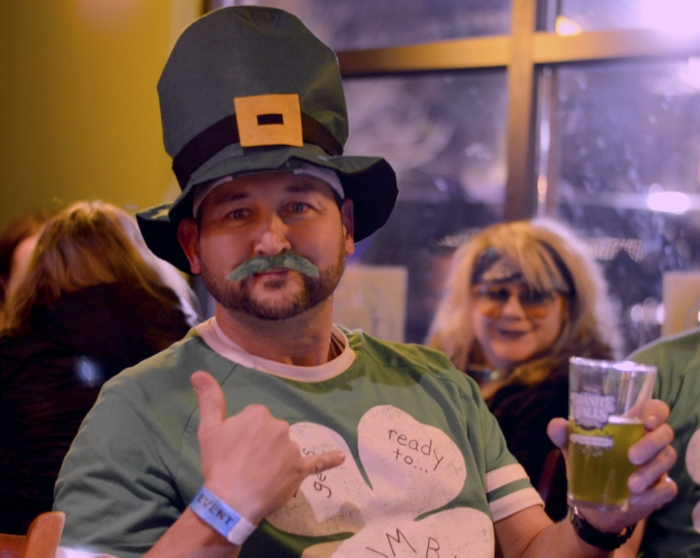 Hugh Fisher/For the Salisbury Post Keith Rogers, of Salisbury, poses in his St. Patrick's Day finery at the Salty Caper during the Luck o' the Irish Pub Crawl, held as part of First Friday.

And shamrocks, green beads and other finery were the order of the night, as downtown’s streets were filled with shoppers and party-goers.

“We like to start a little bit smaller and do it right. We don’t want to disappoint people,” Ruf said.

Due to high demand, Ruf said DSI added 60 more tickets at the start of the week, and a few more Friday, for a total of about 400.

Pub crawl participants received vouchers good at downtown restaurants and bars, most of which had Irish-themed drink specials.

A pre-pub crawl party at Lee Street Theatre kicked off at 5 p.m., while downtown merchants were open with special promotions.

Up on the Square, shoppers could trade in coins collected at downtown merchants for prizes or “Downtown Dollars” vouchers.

Dakeita Roakes and her daughter Hope Hawkins, 12, said they’d been to the Candy Shoppe on Main and Critters Cards & Gifts.

They traded in their coins for green pencils, bead necklaces, ink stamps and other goodies.

“And we got to try on costumes,” Roakes said. “Dinosaur heads!” Roakes said they’d had a lot of fun.

Brittany Holt and her cousin Tessa Sugden said it was their first time at a First Friday event. They moved here four months ago from Florida, Holt said.

Despite the cold, Holt said she’d enjoyed getting out downtown to shop. The two said they bought t-shirts at Dead Ed’s clothing shop.

“Downtown Salisbury has so much potential,” Holt said. “I can see this growing.”

At Uncle Buck’s, owner Judy Howard said the First Friday crowd was on par with other events in the series.

Nearby, Critters owner Bob Lambrecht said that crowds hadn’t been heavy, but also said the cold weather might have something to do with that. Temperatures dipped below freezing around sunset.

Ruf said organizers were very pleased with the response to the first-time event, especially with the excitement that she said built as word spread.

“This will probably be on the event schedule for next year,” Ruf said. “We’re really starting to see Salisbury become a real hub of events.”

Smiles at free dental clinic reveal an ‘attitude of…