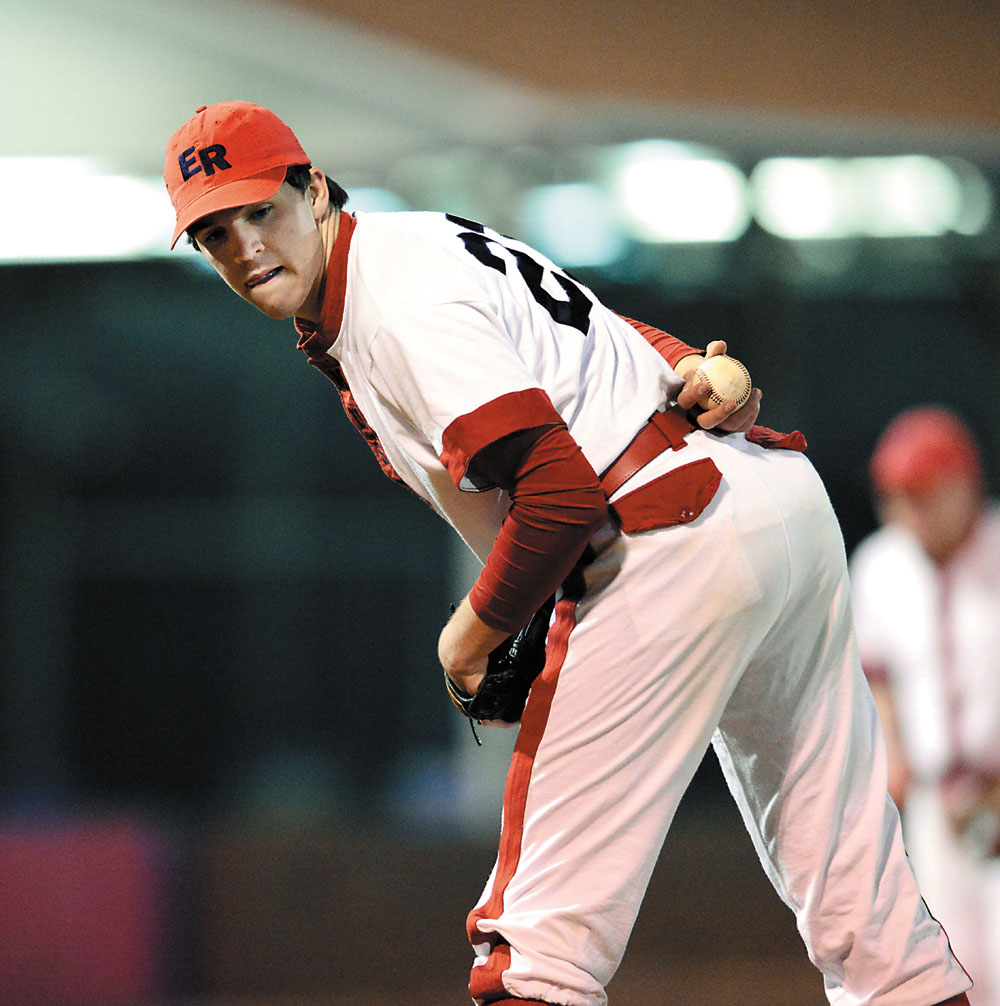 Wayne Hinshaw/for the Salisbury Post East Rowan’s Logan Towne (21) checks a runner at first base Friday in the Mustangs’ home game against Carson at Staton Field. Towne had four hits and needed only 53 pitches to navigate six innings in East Rowan’s 5-1 victory.

GRANITE QUARRY — You may not have heard of Logan Towne, but that’s about to change.

The East Rowan senior introduced himself with a chilling performance Friday night at Staton Field, where he scattered four singles in six innings and pitched the Mustangs past visiting Carson 5-1.

Towne worked efficiently and carefully, delivering just 53 pitches and throwing first-pitch strikes to 16 of the 21 batters he faced. He struck out five, walked one and earned his second varsity win.

“No doubt, it’s hard to throw when it’s cold like this,” the right-hander said. “But after the big inning gave us momentum it was a lot easier to locate and spot-up every pitch.”

Carson (1-1, 0-1 SPC) scored its only run before Towne escaped the top of the first. Brycen Holshouser stroked a leadoff single and losing pitcher Heath Mitchem moved him to third with a one-out base hit to left field. The Cougars went ahead 1-0 on freshman Owen White’s sacrifice fly.

“I’m taking the positives out of this game,” said Carson coach Chris Cauble. “We hit a lot of balls on the nose that went straight to the left fielder. We made some pretty phenomenal defensive plays as well. We’re really young this year, but we didn’t play like a young team tonight.”

East Rowan (2-0, 2-0 SPC) squandered scoring chances in the first and third innings against Mitchem, a strong left-hander who had a sharp, biting curve. In the first, the Mustangs loaded the bases with one out before an interference call at second base defused the rally.

Then in the third Owen coaxed a leadoff walk and Samuel Wyrick drilled a double down the left field line with none out. But a 9-2-5 double play and a strikeout kept Mitchem and Carson ahead.

“That was my fault,” East Rowan coach Brian Hightower said of the deflating double play. “There was nobody out and I was trying to be too aggressive. I shouldn’t have been.”

The Mustangs’ fortunes changed an inning later, when they batted around and scored five runs — all of them unearned — on four hits. The last of the fourth opened when DH Tyler Scruggs lined a ball that deflected off Holshouser’s glove in right field for a two-base error. Jackson Justus’ sac bunt moved him to third and Seth Wyrick’s line drive single to right tied the score. It was still knotted four batters later when Samuel Wyrick steered a two-out, RBI single into left field.

“That was a 2-2 pitch,” Mitchem said. “I just trying to get a ground ball and not do anything dumb. I actually thought it was a really good pitch.”

So was the one he threw to East Rowan infielder Ike Freeman, who turned a low, outside fastball into a decisive three-run double to right-center.

“Ike does a good job of just taking it where it’s pitched,” Hightower said. “We all do that.”

Yes, but when they rolled the final credits, some 90 minutes after the first pitch, it was Towne’s name that stood alone.

“He has grown tremendously over the offseason,” Samuel Wyrick said after collecting three of the Mustangs’ eight hits. “This year he’s really clicking. I mean, 53 pitches in six innings — that’s absolutely crazy.”

NASCAR: Gordon on the pole at Las Vegas