Students connect with others from around the world via technology 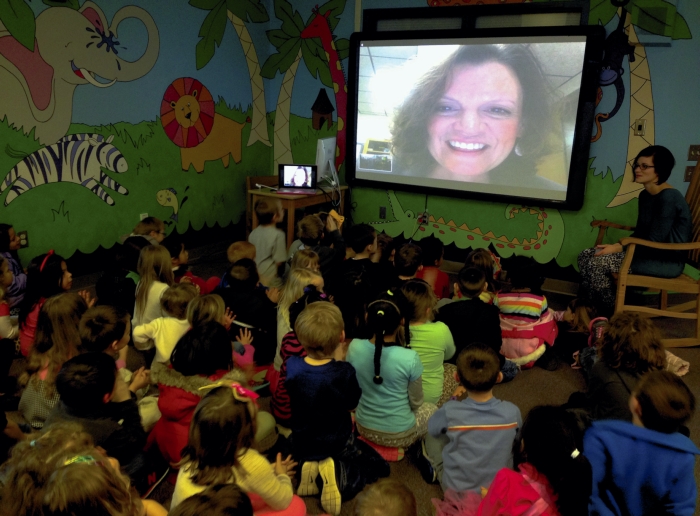 It might be impossible to take an entire class of first graders on a field trip to Canada, but through the power of technology, Enochville Elementary students have been visiting with people from all over the nation and world.

So far this week, they’ve video conferenced with classes in Mooresville, Connecticut and Canada, and they’re planning to read books with people in the United Kingdom and Ireland in the near future.

“It increases their global awareness,” said Allison Barfield, Enochville’s technology Facilitator. “It’s cool to open their eyes to the world that’s bigger than just our city and our state.”

The classes were able to see their similarities while learning about their differences, she said, adding that the class from Canada is even working on a collaborative project with Enochville’s class.

Barfield emailed the three district administrators asking them if they’d be able to read their favorite children’s book to the students.

“I honestly didn’t expect all three of them to respond,” she said.

“In the past I would have gotten in my car and driven to Enochville,” Smith said, but added that this week has been especially busy as he prepares for EdCamp Rowan this weekend and the round trip from his office to Enochville Elementary and back is roughly an hour.

“I could have never done it with the way my schedule was this week,” he added.

But because he was able to read to the students over FaceTime, Smith was able to make it happen.

“It’s really cool to do it over video,” Smith said, adding that he loves the idea that “technology can really connect us.”

As he was selecting a book to read, Smith said he found himself naturally gravitating to an actual book rather than an iBook.

He said that there will always be a place for real books in a classroom. “The technology we’re using in our schools is not the end all be all.”

Smith finally decided on “Oh! The Places You Will Go” by Dr. Seuss.

“It’s a really cool book,” Smith said, adding that Monday would have been Seuss’ 111th birthday.

“It was really a neat experience,” he said.

Not only were these reading sessions a fun way to experience technology for the students, it fit perfectly with the district’s emphasis on reading, Barfield said.

“The students see these leaders and mentors and see that they love to read,” Barfield added.