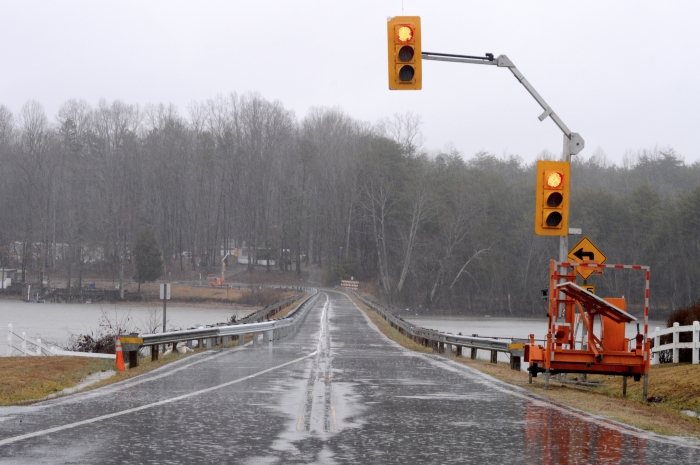 Josh Bergeorn / Salisbury Post file photo - A redesigned St. Matthews Church Road causeway over a High Rock Lake inlet reopened after being closed for over a year because of structural problems.

After a closure that lasted more than a year, zipping across St. Matthews Church Road over an inlet on High Rock Lake is once again possible, at least temporarily.

Engineers late last week wrapped up the final stages of a temporary fix for St. Matthews Church Road’s crumbling causeway over a High Rock Lake Inlet. The temporary fix wrapped up right on schedule, according to initial estimates from the N.C. Department of Transportation.

A new guardrail was installed, pavement striped to reflect a road that’s now one lane and stoplight erected to direct traffic. The lights are coordinated and only allow one direction of traffic to cross at a time.

“We’re just tickled that it’s finally back open,” Trexler said. “It took us a lot longer to have to go all the way around.”

A permanent fix hasn’t yet been decided and is estimated to cost multiple millions of dollars.

The road was closed in September 2013 after the Department of Transportation discovered cracks in the causeway’s pavement. An investigation last year found that the foundation of the 85-year-old causeway was crumbling. The causeway needed to be widened to support the traffic volume, the investigation found.

The causeway will be monitored for future damages while the roadway is open.