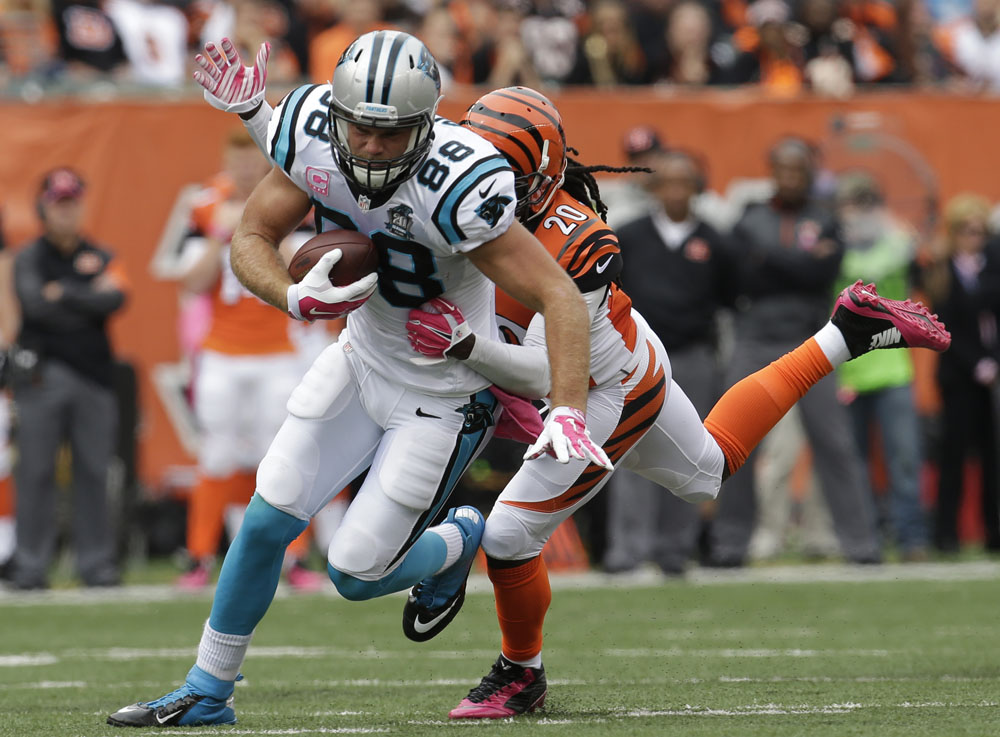 The Associated Press Carolina tight end Greg Olsen (88), shown here in a game against Cincinnatti, signed a contract extension to remain wih the Panthers through the 2018 season. It is a three-year deal worth $22.5 million and includes a $12 million signing bonus, according to his agent Drew Rosenhaus.

The Panthers announced they have signed Pro Bowl tight end to a three-year contract extension that will keep him with the team through the 2018 season.

The deal is worth $22.5 million overall and includes a $12 million signing bonus, according to his agent Drew Rosenhaus.

“I couldn’t be more excited,” Olsen told The Associated Press. “This is what we wanted since we came here and realized this was such a great place to be. We are so thankful that the team wanted me. That was our main goal to remain here in Charlotte.”

Olsen went to his first Pro Bowl in 2014 after catching 84 passes for 1.008 yards, both new franchise records for a tight end.

He said the Panthers only began talking about a contract extension within the last week or so.

Olsen, reached in the Charlotte airport before boarding a plane for a trip to New York, said he’s excited about what’s to come in Carolina, a team that has won back-to-back NFC South division titles.

“I think our future is really bright,” Olsen said. “We have a lot of young talent and mixed in with some of the older veterans…. I think our team is really built for sustainable success.”

Olsen, entering his ninth NFL season, finished the 2014 regular season third among all NFL tight ends in receptions and had six touchdowns. He had three 100-yard receiving games last season, the most ever by a Carolina tight end.

Olsen has spent the past four seasons with the Panthers.

He was acquired in a trade from Chicago in 2011 and has played in 126 consecutive regular season games, the second-longest active streak among NFL tight ends.