NFL: Manning returning to Denver for 2015 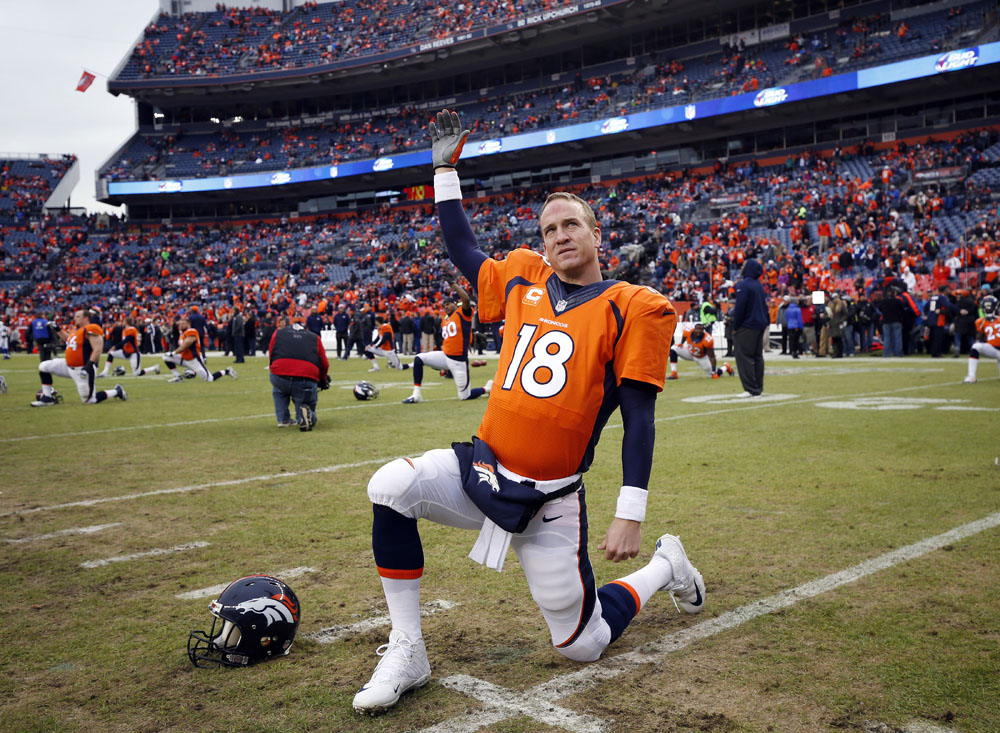 The Associated Press Quarterback Peyton Manning will return for a fourth season in Denver and 18th in the NFL. Manning will reduce his salary from $19 million to $15 million in 2015, according to a person who spoke on condition of anonymity because there was no official announcement. However, he can make up all of the $4 million pay cut by reaching certain performance benchmarks.

ENGLEWOOD, Colo. (AP) — If the Denver Broncos’ 2015 season goes the way he hopes, Peyton Manning will earn back every penny of the $4 million pay cut he took Thursday.

No. 18 made his return for an 18th NFL season official by passing his physical a day after agreeing to a revised contract that calls for him to make $15 million this season.

The new deal he signed after getting a clean bill of health includes incentives of $2 million each for winning the AFC title and the Super Bowl.

“Well, we’re excited it’s over and glad we can move on and glad Peyton’s going to be a part of this team and hopefully win a championship next year,” general manager John Elway told the team’s website. “I think this time of the offseason is always tough for everybody. And it’s a tough part of the business but it’s the time of year that we’ve got to put the best football team together that we possibly can.”

Manning, who left the team’s headquarters Thursday without speaking to the media, was non-committal about returning after the Broncos’ playoff loss to the Indianapolis Colts. But he determined he still had the health and hunger to keep playing at age 39 for new coach Gary Kubiak.

Elway asked Manning to take a pay cut and it took nearly a month to hash out the new deal reached Wednesday that was contingent on Manning passing his annual physical. Every year, the Broncos medical staff checks on Manning’s surgically repaired neck to make sure there’s not any degeneration in the discs above and below the ones that were fused in 2011.

Manning, whose contract still calls for him to make $19 million in 2016 should he decide to play into his 40s, will return to Denver for the start of offseason workouts on April 13.

Manning had a terrific first half of last season but his play slipped dramatically over the second half, when he was hampered by a nagging thigh injury that affected his accuracy.

Pro Bowl running back C.J. Anderson said he expects to see more of the QB who appeared headed for a sixth MVP honor than the one who struggled down the stretch.

“If he said he’s mentally and physically ready to play that doesn’t mean it’s at a sub-par level. It means it’s at a high level,” Anderson said.

The $4 million savings won’t drastically change Denver’s free agency plans. It gives Elway about $18.6 million to work with, but much of that will go to his own restricted free agents and a large draft class.

It does, however, help the Broncos as they pay out $4 million in bonuses and put another $36.5 million into escrow over the next week because of guarantees in the contracts of Manning, Ryan Clady, Aqib Talib, DeMarcus Ware and T.J. Ward.

Kubiak said he “had a good visit” with Manning on Thursday and “I know he’s as excited as anyone” to get started on the hybrid offense the coaches have been constructing for a month.

“We have a big challenge ahead of us, meshing a couple of systems. That’s something we needed to get a head-start on and we’ve done that,” Kubiak said.

Kubiak has designed mainly West Coast offenses throughout his career that often require the quarterback to line up under center and roll out. Mobility has never been Manning’s calling card; he’s been most comfortable making quick throws out of the shotgun in recent years.

Elway said Kubiak’s offense reminds him of the system he ran during the final, Super Bowl-winning years of his career, when Kubiak was his offensive coordinator.

“Peyton can fit into this offense very easily,” Elway said. “It’s very dependent on balance. Peyton won’t have to throw the ball 50 or 55 times. That gets more helpful, the older you get.”

Manning is all in. Recently, he remarked, “Aside maybe from Tubby Raymond’s Delaware Blue Hen Wing-T offense, I feel pretty comfortable playing in any offense.”

Manning is 179-77 in the regular season but just 11-13 in the postseason. His nine one-and-out playoff performances are the only blot on a career that features an unprecedented five MVP honors but half as many rings as brother Eli and three fewer than Tom Brady, this generation’s other premiere passer.

Notes: The Broncos signed long snapper Aaron Brewer to a four-year deal Thursday. Brewer is the first of Denver’s five restricted free agents to get a new deal.