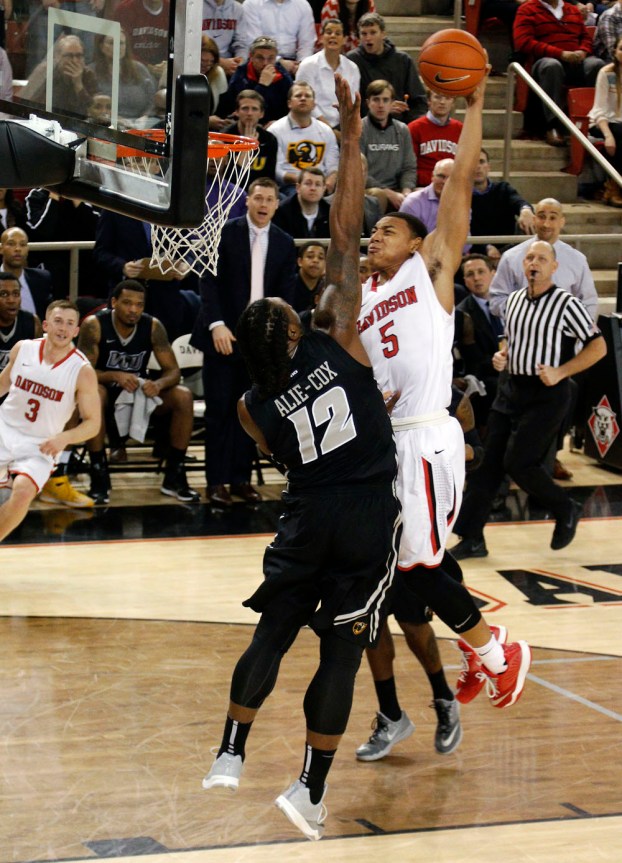 The Associated Press Davidson's Jordan Barham (5) aims his shot over Virginia Commonwealth's Mo Alie-Cox (12) during the first half Thursday at Davidson.

Jordan Barham added 13 points and 14 rebounds for the Wildcats, who pulled back into a first-place tie with Dayton in the Atlantic 10 Conference. Coach Bob McKillop’s Wildcats (22-6, 13-4 Atlantic 10), picked to finish 12th in the conference, can wrap up at least a share of the conference title with a win Saturday night at Duquesne.

It was a dominating win for Davidson, considered a bubble team as the NCAA Tournament approaches.

The struggles continue for VCU (21-9, 11-6), which has lost three straight games including two last week to fall out of the AP top 25.

VCU came into the game forcing more than 16 turnovers a game, but Davidson had little problem beating the “havoc” full-court press and their ball movement in half court sets gave the Rams fits.

Davidson came into the game first in the nation in assist-to-turnover ratio and didn’t panic.

The Wildcats jumped out to a 12-2 lead, then extended the lead to 19 at halftime.

Gibbs was the catalyst for the Wildcats, slicing through the Rams defense and finding teammates for open 3-pointers. Brian Sullivan had three 3-pointers in the first half and the Wildcats were 6 of 13 from beyond the arc and finished with 11 points.

Conversely, the Rams were just 1 of 7 from beyond the arc before the break.

“The performance of our players was magnificent,” McKillop said. “That is as fine of a performance from start to finish that we have played at Belk Arena as we’ve ever had.”

The Rams could never cut the lead below 15 in the second half.

Davidson increased its lead to 74-49 late in the second quarter behind a dunk by Peyton Aldridge off an offensive rebound.

Aldridge added 10 points for the Wildcats.

“Good offense helps good defense,” McKillop said. “I love the attack that we had.”

VCU: The Rams didn’t help themselves at the free throw line, finishing just 12 of 24.

Davidson: The Wildcats dominated on the glass, outrebounding the Rams 41-32.