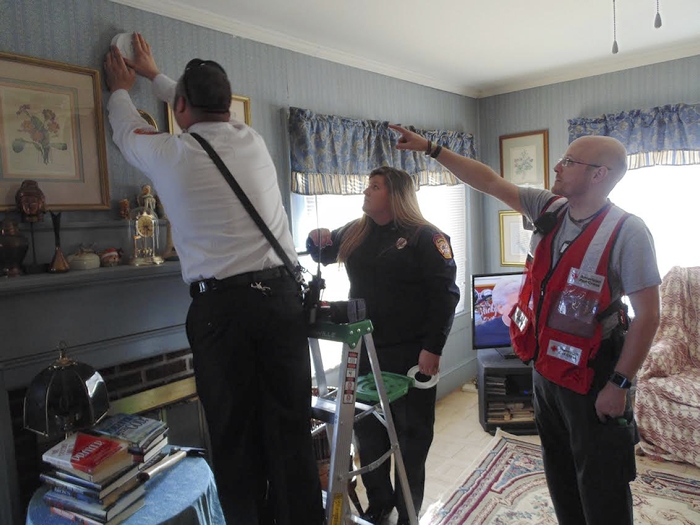 ROCKWELL — Emergency management officials are reminding the community that as daylight saving time approaches and residents turn their clocks forward, it is also the perfect time to make sure smoke alarms are working properly.

Twice a year, members of the Red Cross team up with workers from Piedmont Natural Gas and local firefighters to canvass neighborhoods with information on fire safety, family fire escape plans and the importance of operable smoke alarms. Not only do residents receive a packet including this valuable information, they also get the opportunity to have smoke alarms installed in their home – free of charge.

“A working smoke detector can be the difference between life and death,” said Tim Linker, chief of the Rockwell City Fire Department.

Smoke detectors should be installed on every floor, including one in each sleeping area, hallway, and in the kitchen. Interconnected alarms ensure that no matter what room you are in, you will hear the alarm and know to take action.

“It is important to have an escape plan to make sure that all family members are accounted for, along with an emergency kit including important documents, water, telephone numbers and medications,” Red Cross Communications Officer Jennifer Franklin said.

According to statistics provided by Linker, seven people are killed every day due to house fires. In 62 percent of fire deaths, the homes have either inoperable or no smoke alarms.

In a home on Division Avenue, five smoke alarms were installed for a couple whose home did not previously have alarms.

“I really appreciate them doing this,” resident Charles James said. His wife survived a house fire before they got married 52 years ago. Other homes in the neighborhood received help testing their current alarms and changing batteries if needed.

Though the canvassing event only occurs twice a year, the Red Cross has an ongoing initiative to provide free smoke alarms to those in need. If you are interested in having alarms installed or need assistance developing an escape plan, contact the Elizabeth Hanford Dole Chapter of the American Red Cross at 704-633-3854.