No doubt about it, Roy Leazer Sr. danced a full life 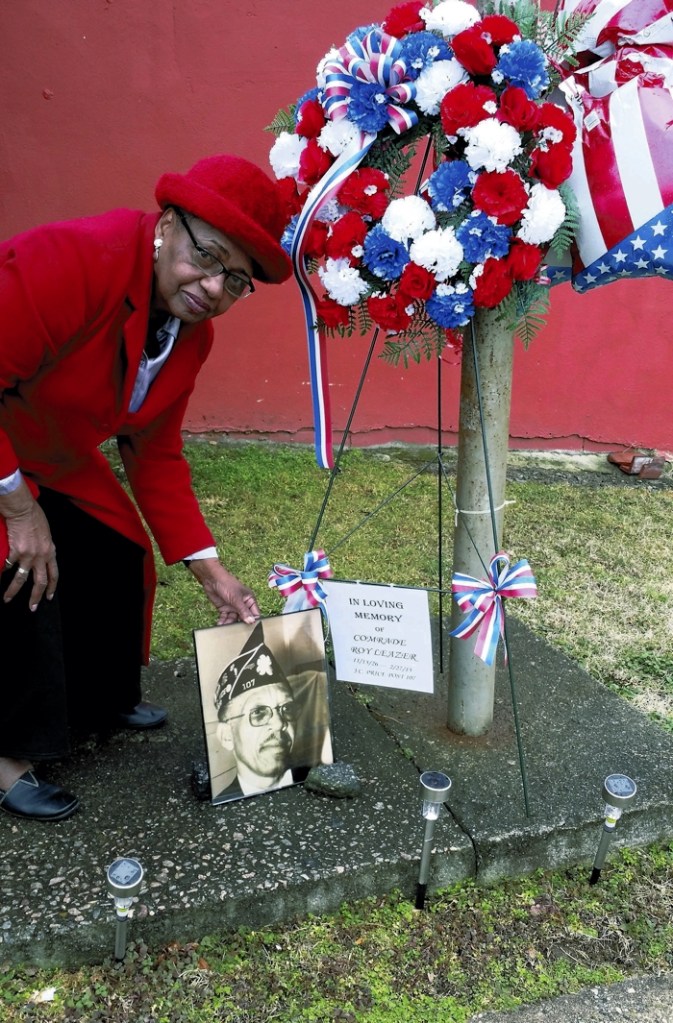 Submitted photo Mae Carroll adjusts a photograph of Roy Leazer Sr. at a memorial tribute to Leazer outside the J.C. Price Post 107.

“Everywhere we went,” J.C. Price Post 107 Commander Mae Carroll said, “women would come up and ask him to dance. He took pride in that. I really think when he could not be active, that’s when he gave up.”

Leazer, the man most identified with the J.C. Price Post, died Friday after he never fully recovered from a broken hip. Because he always had such high energy, even into his 80s, his quick decline and death caught many of his friends and acquaintances by surprise.

The flag at the J.C. Price Post is flying at half-staff this week in honor of Leazer. A small memorial tribute also has been fashioned at the base of the flagpole.

A U.S. Army veteran of World War II, the 88-year-old Leazer was a member of the Legion post for 63 years. He served more than five decades as its historian and also was its longtime membership chairman, besides being a post commander.

He receives credit for starting the post’s ladies’ auxiliary, and he was one of the founders and mentors of the post’s After-School Community Learning Center, which operated summers and during school terms for five years.

On top of that, Leazer led as general chairman for many years the Memorial Day celebration, which the American Legion post started with the Urban League. It will return as usual this year.

A big crowd is expected today for Leazer’s visitation and funeral at Moore’s Chapel AME Zion Church. Nine women from the auxiliary will serve as flower girls, and Legionnaires will be pallbearers.

“He was an icon,” Carroll says. “It’s just a shock for the whole community.”

Leazer served as the 2012 grand marshal for the Holiday Caravan parade in Salisbury. He was a recipient of the Elizabeth Duncan Koontz Humanitarian Award, and he was past national president of the Livingstone College Alumni Association.

He fashioned a 30-plus-year career in social work at the Hefner VA Medical Center in Salisbury.

In 1990, he waged a campaign to become the N.C. American Legion’s first black state commander, but lost by a narrow margin. Carroll, his campaign manager for that run, thought he gave his concession speech too early.

Leazer had been the first African American to seek the office.

“He was from the old school, and it might not have been his time,” Carroll says. “I don’t think he could have taken the racism that might have prevailed at the time.”

Leazer only recently had relinquished his membership chairman duties to  Dan Haddock, a 20-year Army veteran whom Leazer recruited to the J.C. Price American Legion Post in 1994.

“Roy taught me a lot,” says Haddock, who also is the post’s sergeant at arms. “As far as the history of the American Legion, he knew everything. He could tell you anything you wanted.”

For many years, Leazer also served on the Rowan County Veterans Honor Guard.

He was a board member for the Central Children’s Home in Oxford, and was well-known and widely recognized for annually raising funds for the home.

“That was his special project,” Carroll says. “He was just everything. He was a pillar in the community.”

Leazer’s wife of 62 years died in 2014. He broke his hip several weeks ago when he fell, walking up the steps to his home. He was carrying oxygen with him because he recently had been diagnosed with congestive heart failure.

“That started everything,” Carroll says.

Still, Carroll looked for the energetic Leazer to recover from the broken hip, and she ordered a special trophy that she intended to present to him March 18, when the American Legion marks its 96th birthday.

The inscription on the trophy recognizes Leazer’s ‘sustained high performance.”

And no one can argue with that.