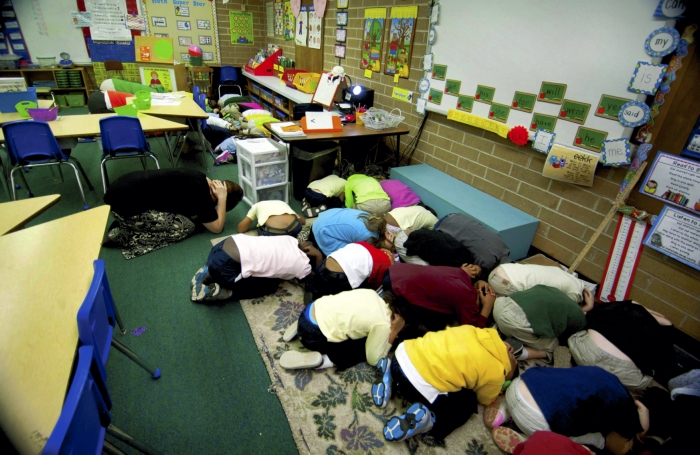 SPENCER — The words rang loud and clear on the PA system Wednesday morning at North Rowan Elementary School — “this is a state tornado drill. Please move to your designated area and remain in that designated area.”

It was a message given by Principal Scotty Adcock to the pre-K through fifth grade students. The drill was one conducted statewide and at all of the schools within Rowan-Salisbury School System. This week is Severe Weather Preparedness Week.

“For our students especially, we want them to be prepared for any emergency that could come up and this gives us an opportunity for them to practice, whether they’re at school or at another place — just to know what they can do to keep themselves safe, if an emergency would arise,” Adcock said.

He said the students conducted themselves very well during the drill, were quiet and went into positions quickly.

Students were led to interior rooms and hallways, said Sharon Gardner, risk manager and safety officer for the school system.

Gardner explained that since North Elementary is the only school with sky lighting, the school system consulted with the county fire marshal regarding the safest places for students, and came up with using interior rooms.

She said the school system changed from surprise drills to making announcements so students aren’t frightened during drills and to reduce the risk of older students texting parents about an “emergency” at the school.

Gardner said not only did the schools participate in the statewide drill, but the school system’s transportation and central office.

It’s important the students remain in the correct position — legs tucked underneath them and hands covering their head and neck. Each classroom also has an emergency response chart that includes emergency numbers and procedures for severe weather, fire, lockdowns and other potential disasters.

“We appreciate our local school facilities, citizens and businesses participating in this morning’s successful tornado drill. Having a plan, understanding, and knowing what to do when severe weather strikes can make all the difference in the world,” said Frank Thomason chief of Rowan County Emergency Services.

Thomason has said the upcoming spring is peak tornado season.

In 2014, the National Weather Service issued 81 tornado warnings for North Carolina and recorded 36 tornadoes that killed one and injured 34 people. Combined, the tornadoes caused more than $22 million in damages.

Tips during a tornado:

• Know where the nearest safe room is, such as a basement or interior room and away from windows, and go there immediately if you hear or see a tornado.
• There is no safe option in a car, just slightly less-dangerous ones. If the tornado is visible, far away, and traffic is light, you may be able to drive out of its path by moving at right angles to the tornado. Seek shelter in a sturdy building, or underground if possible. If you are caught by extreme winds or flying debris, park the car as quickly and safely as possible, out of traffic lanes. Stay in the car with the seat belt on. Put your head down below the windows; cover your head with your hands and a blanket, coat, or other cushion if possible. If you can safely get lower than the level of the road, leave your car and lie in that area, covering your head with your hands. Avoid seeking shelter under bridges, which can create deadly traffic hazards while offering little protection against flying debris.
• If you are outdoors, and there is no shelter available, take cover in a low-lying flat area. Watch out for flying debris.
For more information on tornadoes and overall emergency preparedness, go to the county’s public preparedness website, www.ReadyROWAN.org.
Residents can also download the free ReadyNC mobile app, which is available for both Android and IOS mobile devices.
Contact reporter Shavonne Walker at 704-797-4253.