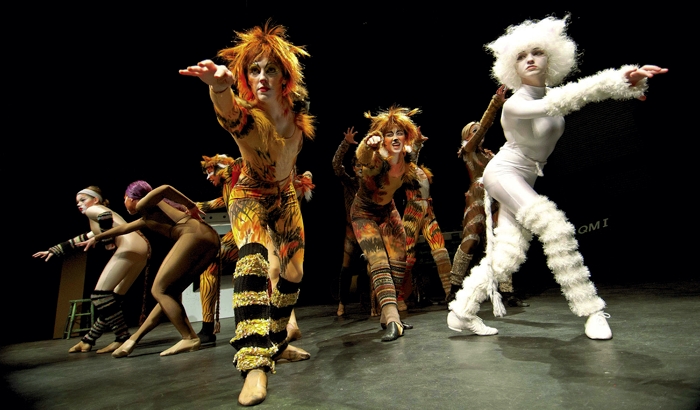 Since CATS first opened on the West End stage in 1981, it has become one of the world’s best-known and best-loved musicals. As of 2014, it is the third longest-running Broadway musical in history.

Based on T.S Eliot’s Old Possum’s Book of Practical Cats, the musical tells the story of a tribe of cats called the Jellicles that meet on one special night each year, at the Jellicle Ball, where their wise and benevolent leader announces which of them will go up to The Heaviside Layer and be reborn into a whole new Jellicle life.

The show is completely told through music with virtually no spoken dialogue between songs. The songs of the musical comprise Eliot’s verse set to music by the composer, the principal exception being the most famous song from the musical, “Memory,” for which the lyrics were written by Trevor Nunn after an Eliot poem entitled “Rhapsody on a Windy Night.”

The cast of the Piedmont Players production is comprised of a few PPT veterans joined by a number of new faces, including three Catawba College students and newcomers from as far away as Charlotte, Mooresville and Huntersville. Due to the physical demands of the show, this cast has rehearsed far more than the norm, practicing four hours per night Monday through Friday and eight hours every Saturday for more than a month.

PPT’s production of CATS, which shattered the Meroney opening day ticket sales record, reunites the creative team that brought you last season’s smash hit musical CHICAGO. Director and choreographer Tod A. Kubo, musical director Mike Wilkins, and set designer Reid Leonard will again combine their incredible talents to bring another show to the Meroney stage that will be talked about for years to come.