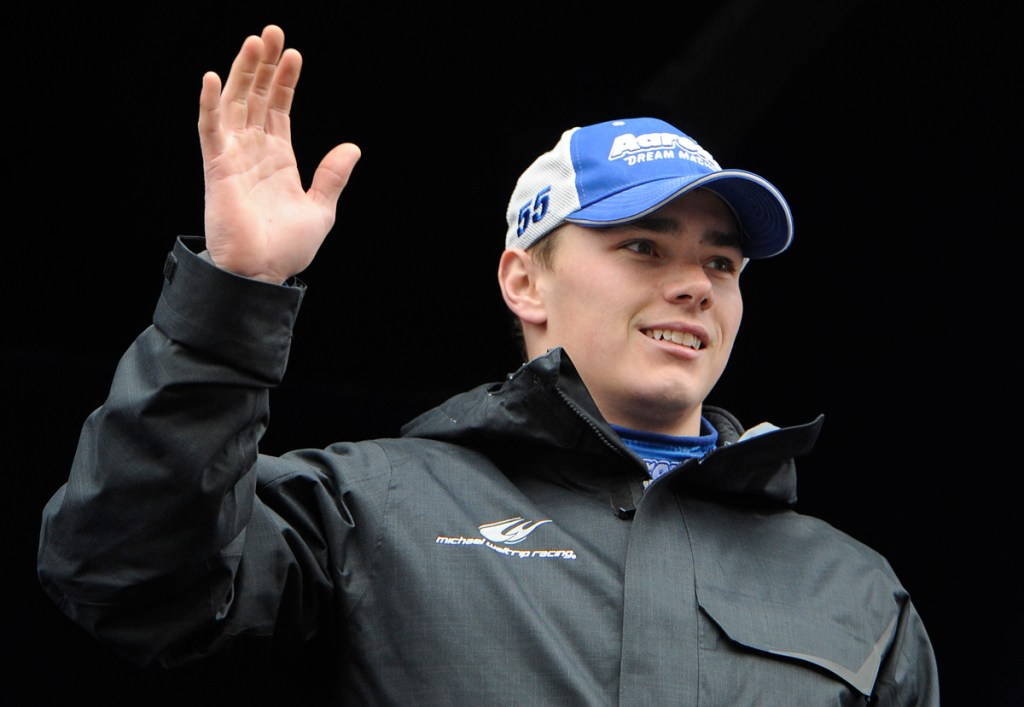 The Associated Press Brett Moffitt is introduced Sunday before the Folds of Honor Quicktrip 500 NASCAR Sprint Cup series auto race at Atlanta Motor Speedway. Moffitt went to Atlanta with exactly one race on his 2015 schedule. An eighth-place finish as Brian VickersÕ replacement now might have the Michael Waltrip Racing development driver on the verge of putting together some more races.

CHARLOTTE, N.C. (AP) — Brett Moffitt opened the year with exactly one race on his 2015 schedule, the Sprint Cup race at Atlanta as the replacement driver for Brian Vickers.

He made the most of his opportunity, finishing eighth last Sunday in a head-turning performance. Now the Michael Waltrip Racing development driver has parlayed the run into more seat time.

Moffitt on Wednesday got a three-race deal to drive the No. 34 for Front Row Motorsports starting this weekend at Las Vegas Motor Speedway. He’s also slotted to drive the next two weeks at Phoenix and Fontana, California.

“After last weekend, I’m obviously eager to get back into a car and keep racing,” Moffitt said. “I’m grateful to Bob Jenkins and his team for giving me the chance to do that. I’ll do my best to get some good finishes for them. I’m also thankful that Michael Waltrip Racing is allowing me to pursue this opportunity.”

Front Row’s seat opened when David Ragan was picked up by Joe Gibbs Racing to be the injury replacement for Kyle Busch for the foreseeable future. Joe Nemechek replaced Ragan, but Front Row worked out a deal with MWR and Toyota to get the 22-year-old Moffitt in the car the next three weeks.

Front Row is a Ford team, and Moffitt a Toyota Racing Development test driver, but both sides have been accommodating since Busch was injured.

“We know Brett doesn’t have a ton of Sprint Cup experience, but he’s got a lot of hours behind the wheel in testing time, and he was certainly impressive Sunday in Atlanta,” Front Row owner Jenkins said. “For only his eighth start, he showed a lot of poise, patience and maturity that you don’t often see in drivers that age.”

Moffitt ran seven Cup races last year with a best finish of 22nd at Dover in his debut. Driving for Vickers, who sat out the first two races of the year following offseason heart surgery, put Moffitt in his best equipment to date and he delivered.

“I had this one opportunity to prove myself and I think we more than exceeded the expectations,” he said this week. “It’s gotten the ball rolling on some opportunities, and that’s what I need to get in the car more often.”

MWR, which wants Moffitt to get as much seat time as possible, was pleased a deal with Front Row could be worked out.

“There has been heightened interest for Brett Moffitt’s services after his solid performance last weekend in Atlanta,” co-owner Rob Kauffman said. “While he is committed to MWR, we are happy for him to gain further valuable experience.”