Leonard Pitts: Injustice is resilient, but so are defenders of freedom 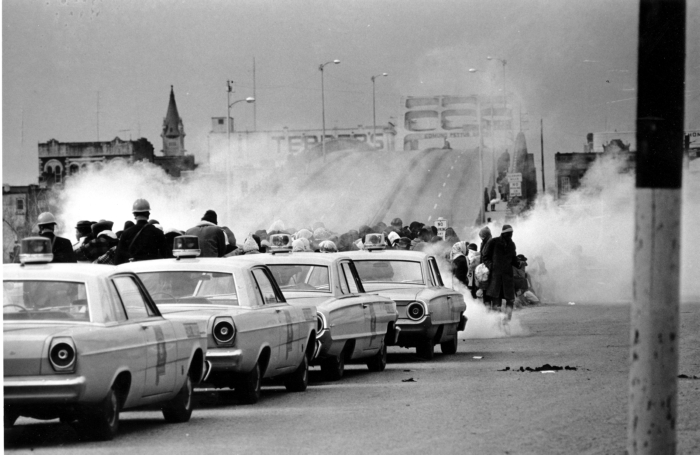 Tear gas fumes fill the air as state troopers, ordered by Gov. George Wallace, break up a demonstration march in Selma, Ala., on what is known as Bloody Sunday on March 7, 1965.

First, they sang “God Will Take Care of You.”

Then they walked out of Brown Chapel to a playground where they organized themselves into 24 groups of 25 each and set out marching. Their route out of Selma took them onto Highway 80, which is carried over the Alabama River by a bridge named in honor of Confederate general and Alabama Ku Klux Klan leader Edmund W. Pettus.

At the foot of the bridge, the marchers were met by Alabama state troopers. Some were on horseback. Major John Cloud spoke to the marchers through a bullhorn. “It would be detrimental to your safety to continue this march,” he said. “And I’m saying that this is an unlawful assembly. You are to disperse. You are ordered to disperse. Go home or go to your church. This march will not continue. Is that clear to you?”

He gave them two minutes to comply. Just over one minute later, he ordered troopers to advance.

They moved toward the marchers, truncheons held waist high, parallel to the ground. But something seemed to overtake them as they pushed into the demonstrators. The troopers began to stampede, sweeping over unarmed women, children and men as a wave does a shore.

Teargas filled the air. Lawmen on horseback swept down on fleeing marchers, wielding batons, cattle prods, rubber hoses studded with spikes. Skin was split. Bones were broken. The marchers were beaten all the way back into town. A teenager was hurled through a church window. On the bridge, the cheers and rebel yells of onlookers mingled with the shrieks of the sufferers and became indistinguishable.

Thus was the pavement of the freest country on Earth stained with the blood of citizens seeking their right to vote.

By rights, this 50th anniversary of those events should be an unalloyed celebration. After all, the marchers, fortified by men and women of good will from all over the country, eventually crossed that bridge under federal protection, marched for four days up Highway 80 and made it to, as the song says, glory. They stood at the state capital in Montgomery and heard Martin Luther King exhort them to hold on and be strong. “Truth crushed to earth,” he thundered, “will rise again!”

The Voting Rights Act was signed into law. And African Americans, who had been excluded from the ballot box for generations, went on to help elevate scores of citizens who looked like them to the mayor’s office, the governor’s mansion, the White House.

So yes, this should be a time of celebration. But the celebration is shadowed by a sobering reality.

In 2013, the Voting Rights Act was castrated by the Supreme Court under the dubious reasoning that its success proved it was no longer needed. And states, responding to a nonexistent surge of election fraud, have rushed to impose onerous new photo ID laws for voters. When it is observed that the laws will have their heaviest impact on young people, poor people and African Americans — those least likely to have photo ID — defenders of the laws point to that imaginary surge of fraud and assure us voter suppression is the furthest thing from their minds. How can it be about race, they cluck piously, when the laws apply to everyone?

Of course, so did grandfather clauses, poll taxes, literacy tests and other means by which African-American voting rights were systematically stolen for decades and a Whites Only sign slapped onto the ballot box. It is disheartening that we find ourselves forced to fight again a battle already won. But the events of half a century past whisper to us a demand for our toughness and faith in the face of that hard truth. They remind us that, yes, injustice is resilient.

But truth crushed to earth is, too.

Leonard Pitts is a columnist for The Miami Herad. Contact him at lpitts@miamiherald.com.