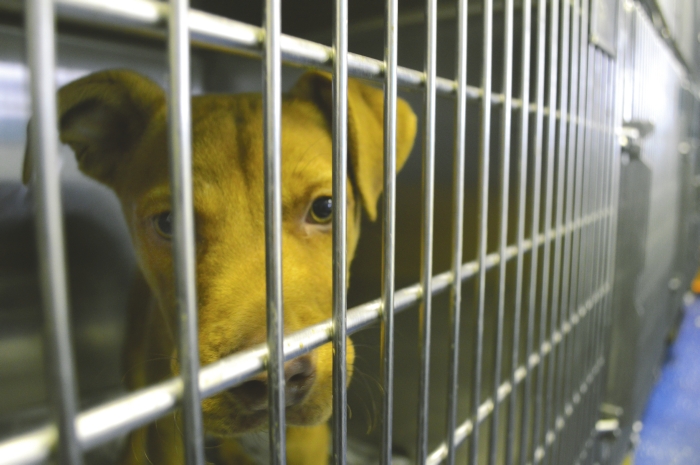 A puppy peers through its cage at the Rowan County Animal Shelter on Tuesday. The shelter has seen a massive uptick in adoption rates and a steep decline in euthanasia rates.

The impact of social media and community support on the lives of stray dogs and cats at the Rowan County Animal Shelter is nothing short of astounding.

As Josh Bergeron reports in a series that culminates today, the number of animals euthanized at the county shelter has dropped from 5,649 in 2010 to 739 in 2014. This is quite a change.  The shelter has shifted from focusing on the disposal of unwanted animals to promoting the adoption of available pets.

On Wednesday afternoon, shelter staff posted this on Facebook: “11 adoptions today, 6 dogs and 5 cats! We hope everyone has a wonderful evening!”

Animal advocates have been a big part of the shelter’s new focus. They lobbied tirelessly to end use of the shelter’s gas chamber, which was hauled off last year. At the same time, interest grew in helping the shelter instead of attacking it. Volunteers from Friends of the Rowan County Animal Shelter also promote adoptions on Facebook. Another organization, Shelter Guardians, donates vaccines, medicine, toys and food  to the shelter. And animal rescue groups, seemingly countless, are a huge part of the transformation.

Changes are coming to the facility, too. Christine Morykwas of Winston-Salem is paying for the addition of an $832,000 feline wing, and Shelter Guardians will help update the old part of the shelter as a dogs-only facility.

Can a shelter have too much help? Director Clai Martin is balking at the formation of a volunteer program, and he limits the number of pets a rescue group can take out of kennels for photographs. Community support may be a double-edged sword — lots of help and lots of opinions about how things should be done. Martin’s experience and insights are valuable, but he needs to keep an open mind to others’ opinions and experience, too. Right now, the animal advocates have a big success story on their side.