Netanyahu helping himself or the world? 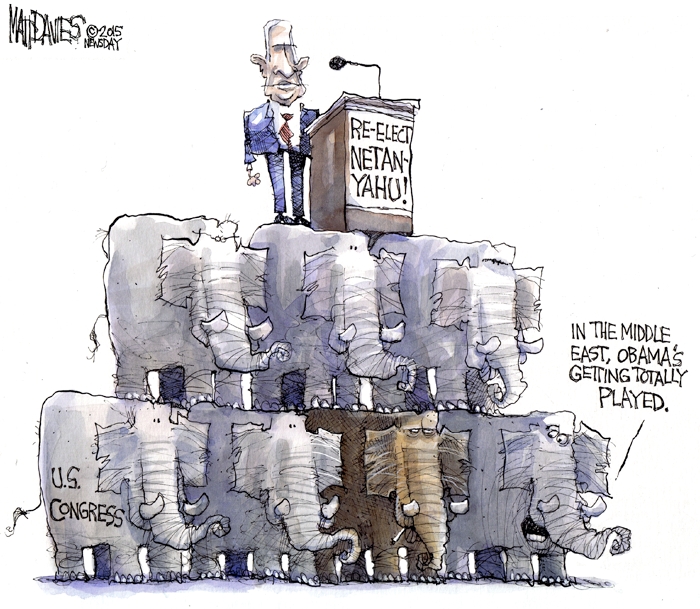 Excerpts from editorials and columns from around the country:

Prime Minister Benjamin Netanyahu of Israel could not have hoped for a more rapturous welcome in Congress. With Republicans and most Democrats as his props, he entered the House of Representatives to thunderous applause on Tuesday, waving his hand like a conquering hero and being mobbed by fawning lawmakers as he made his way to the lectern.

Even Washington doesn’t often see this level of exploitative political theater; it was made worse because it was so obviously intended to challenge President Obama’s foreign policy.

Mr. Netanyahu’s speech offered nothing of substance that was new, making it clear that this performance was all about proving his toughness on security issues ahead of the parliamentary election he faces on March 17.

Slipping away: Netanyahu earned the cheers of Congress when he thanked lawmakers for decades of staunch, bipartisan support. But, he warned Israel will not remain “passive in the face of genocidal enemies” like Iran. It would meet Iran’s threat to wipe the Jewish state off the planet, he indicated, even if it stands alone.

That’s a threat no president can dismiss lightly. In his rebuttal, Obama did, though, dismiss Netanyahu’s speech as old porridge. The president looked like a man who has tried hard to achieve something but wonders if it’s slipping from his grasp.

High stakes: Mr. Netanyahu hinted that he could still accept some kind of agreement, despite attempts to portray him as opposed to any concessions. But the Prime Minister made clear in particular that any sunset provision would only be acceptable if it hinged on a change in Iran’s behavior.

Given Mr. Obama’s reaction, the Prime Minister knows his real audience is Congress and the American people. His speech raised serious doubts about an accord that has been negotiated in secret and which Mr. Obama wants Americans to accept without a vote in Congress. Now maybe we can have a debate worthy of the high nuclear stakes.

Churchillian? Alas, Bibi is Churchill when it comes to isolating Iran, but he is AWOL when it comes to risking his own political future to make it happen. I have a problem with that. I still don’t know if I will support this Iran deal, but I also have a problem with my own Congress howling in support of a flawed foreign leader trying to scuttle the negotiations by my own government before they’re done. Rubs me the wrong way.

A non-apology: Netanyahu is a brilliant speaker, and his call to arms was a tour de force — managing to enlist both Elie Wiesel and Moses in his bid to sabotage negotiations. …

But for all his oratorical skill, Netanyahu could not paper over the partisan divide worsened by his visit, which had been arranged without consultation with the White House. …

“I deeply regret that some perceive my being here as political,” Netanyahu told the lawmakers — a version of the “I’m sorry you feel that way” non-apology.

The pope: Beyond his own political success in his upcoming election, (Netanyahu) is a reckless warmonger who cloaks his own thirst for supremacy in the guise of righteousness on behalf of all Jews and the veil of U.S. protection. The PM knows the U.S. will always be ready to defend Israel at all cost, which we should. However, Netanyahu, one of the world’s foremost prima donnas, is looking to start a fight and hide behind his bodyguards.

Finally, the PM declared that when he speaks before Congress he is speaking on behalf of all Jews. Senator Dianne Feinstein said this was an “arrogant statement.” I would also call it offensive. Netanyahu is the democratically-elected prime minister of the state of Israel, and he is anointing himself the pope of all Jews.

Shake up: Perhaps after all is said and done, Netanyahu’s visit to America helped shed light on some important fissures taking place that need to be mended quickly. The visit was — in reality — an effort by politicians in both the United States and Israel to shake up their respective domestic politics. But in the end what we are left with is outstanding questions about the U.S.-Israeli relationship. I hope it will remain strong. It should remain strong. But we need to find a way to get domestic politics out of the equation — on both sides — and revive our history of shared support.

Literally a white house: By agreeing to sidestep normal diplomatic channels to address Congress, Netanyahu has become an instrument of a Republican Party that has shown an unbridled, personal disrespect for Obama, his wife and children since this black family moved into the building many Republicans apparently think is literally a white house. …

Last week, Susan Rice, the president’s national security adviser, called Netanyahu’s decision to address Congress “destructive.” She was talking about relations between the Israeli prime minister and Obama — who has nearly two years remaining in his presidency. By becoming an instrument of the GOP’s mean-spirited war on Obama, Netanyahu has done great harm to his relationship with the president and his supporters in Congress.

Now, Netanyahu — I believe — has a lot of blacks wondering whether Israeli voters will affirm his mistreatment of this nation’s first black president when they go to the polls on March 17 to choose a government that speaks for them.