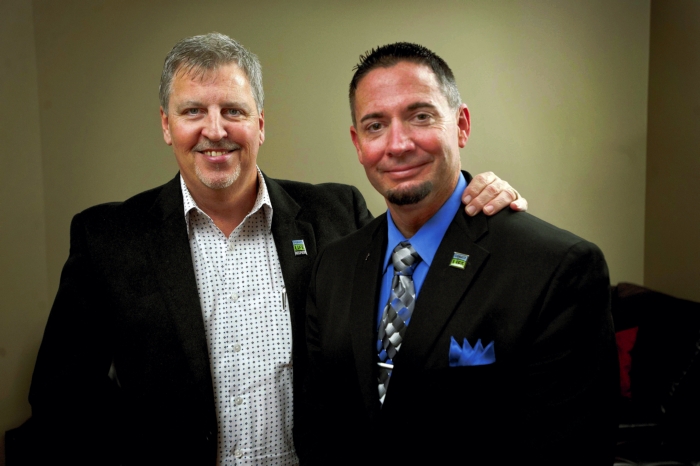 SALISBURY — It remains an improbable story. A Baptist pastor and a gospel singer meet by chance at a church bake and craft sale. The strangers talk, the pastor learns later through social media the gospel singer needs a kidney to survive, and the pastor decides he’ll volunteer one of his own kidneys.

The pastor proves to be a perfect match. Meanwhile, the men become close friends and participate together in various fundraising events leading up to the day of the transplant operations.

That day is coming Monday at Duke University Medical Center in Durham. Sometime Sunday afternoon, the Rev. Tim B. Jones and Don Herbert and their families will meet at Tim’s little church in Kannapolis, Mercy Independent Baptist, and leave together for a Sunday overnight stay in Durham.

The surgeries are scheduled to begin at 7:30 a.m. Monday, and a 6.5-hour window has been reserved for the operations.

“It’s completely amazing what God can do to put someone in your path,” says Herbert, who has stage 5 kidney disease. “I think our story has touched a lot of people in a lot of different ways.”

Herbert still can’t believe a total stranger to him some four months ago has become his closest friend, not to mention is giving him one of his kidneys so he can live. They talk now once or twice a day. Their families often go out to eat together. They have shared their stories together in newspapers and on television, besides appearing together at the events where Don sings and Tim preaches.

“It’s mind-blowing to be as close as we are,” Herbert says. “… He has jumped through a lot of hoops for me, and I am forever indebted to him and grateful. I will never be able to repay what it means to me and my family.”

One hurdle still has to be cleared before Monday. Herbert, 56, is scheduled for a heart catheterization at 6:30 this morning. There’s still a question about how Herbert’s failing kidneys will be affected by a dye used during the catheterization. He may face going on dialysis afterward, meaning his stay at Duke Medical Center could be longer than expected.

But Jones is optimistic about Monday.

“They’re not expecting to find anything that would stop the surgery or put it on hold,” Jones says.

Because a stress test revealed Herbert needed the heart catheterization, he was taken off a waiting list for a new kidney last fall. Even if he were returned to the list, the typical waiting period for a new kidney is three to five years.

The sobering news led Don’s wife, Belinda, to post a personal plea on Facebook, asking anyone to consider giving Don a gift of life by donating a kidney.

Not long after he and Herbert had met for the first time at his church’s bake sale, Jones noticed Belinda’s post. Jones prayed a lot, talked it over with his wife, Sherry, and the couple had soon invited the Herberts to their Salisbury home. The night ended with Jones offering to be a kidney donor for Don.

They announced Jones’ intended gift together at a Nov. 20 revival.

If the transplant surgery happens Monday as expected, both men face about six to eight weeks of recovery. Jones, 44, already has worked his last night shift as a surgical technologist in the operating room at Carolinas Medical Center-NorthEast and is officially on a leave. He plans to preach his last sermon for awhile at Mercy Independent Baptist Sunday.

In connection to this journey with Herbert, Jones has preached in the past about surrendering to God and his call to faith. Jones says Sunday’s message will be a Part 2 of that message — about making yourself available to God and putting your trust and faith in him and believing things will work out.

When this whole saga started last October, an actual transplant date seemed pretty far out and the magnitude of what was happening didn’t register with him, says Jones, a former law enforcement officer. But the date has been moved up several weeks because of Herbert’s deteriorating kidneys.

Herbert is a tenor in the gospel-singing group, The Parables of Christ. Many years ago, from 1978-1992, he was a professional wrestler who went by the name of John Savage. The son of a preacher, he began gospel-singing in earnest in 1986, and the group he is with now sings 150 to 160 dates annually and reaches into six states.

But because of his health issues, Herbert hasn’t held down any full-time jobs since 2002. He received a liver transplant March 17, 2013.

The men held a special benefit for themselves at Southeast Middle School, and they also have had gospel sings and messages at several churches. Jones and Herbert plan to be together at one more gospel sing from 6-8 Saturday night at Mercy Independent Baptist on Pump Station Road in Kannapolis.

Don will be singing with members of his old gospel group, Zion’s Hill.

“I will be giving a special message,” Jones says.

According to Jones, the fundraising has collected about $17,000 so far, and it will go toward paying their daily expenses during recovery.

“It’s incredible to see the outreaching of people and the support we’ve had,” Jones says.

A friend from Marion is supplying rooms for everyone at the Courtyard Marriott in Durham Sunday night.

Herbert, who lives about 5 minutes from Mercy Independent Baptist, says it was God’s will that he met Jones for the first time that Saturday back in the fall.

And the story may not be over.

“I believe God has something for him and I after this,” Jones says. “What it is, I don’t know.”

Donations for Jones and Herbert can be mailed to Jones’ home at 291 Settlers Grove Lane, Salisbury, NC 28146, and checks should be made payable to “Mercy Independent Baptist Misc. Fund.”