Cal Thomas: Bibi at the barricade 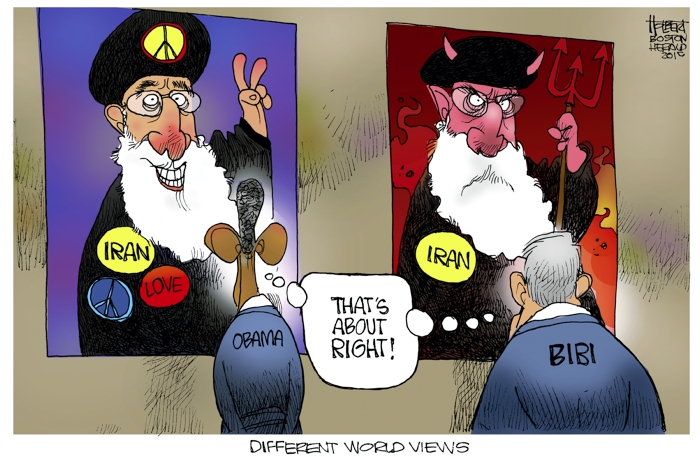 The White House opposed Israeli Prime Minister Benjamin Netanyahu speaking to Congress, but not because the speech has political implications, coming as it does just two weeks before Israel’s March 17 election. If the administration truly had political concerns it would not have dispatched a team of Obama loyalists to Israel to help defeat Netanyahu.

No, many believe the real reason the administration opposed Netanyahu’s speech is because he would tell the truth about Iran’s nuclear threat and the administration wanted to cover up what could ultimately become a very bad deal. Iran wants nuclear weapons. And yet the U.S. is promoting the fiction that despite past behavior and the apocalyptic statements by its leaders, Iran will agree to stop its nuclear program. It will not.

“Six powers — the United States, Russia, China, Britain, France and Germany — are negotiating with Iran toward an agreement to restrain Tehran’s nuclear program in exchange for easing economic sanctions,” writes Reuters. “Netanyahu has spoken scathingly about a possible deal and says a nuclear-armed Iran would pose an existential threat to the Jewish state.” Netanyahu is right.

Iran cannot be trusted to honor any agreement. Iran wants to become a global player. It wants Israel gone. No agreement meant to hamper either goal will have any lasting effect.

Netanyahu’s defiance of American dictates has precedence. On June 7, 1981, Prime Minister Menachem Begin ordered the destruction of the Iraqi Osirak reactor just before it would become operational. The attack occurred three weeks before Israel’s June 30 election. There were the predictable denunciations from all quarters about how the attack would hurt the “peace process,” which has never existed, but privately Reagan administration officials were said to have cheered Israel’s actions.

President Obama and the State Department are on the wrong side of history and public opinion when it comes to Iran and the threat it poses to global stability. BloombergView.com cites a Paragon Insights poll conducted for The Israel Project, a pro-Israel group, which found that 51 percent disapprove of Obama’s foreign policy, 41 percent approve. A wider margin — 43 percent to 25 percent — approve of Netanyahu speaking to Congress and 47 percent oppose the way the president has handled the Netanyahu address.

It isn’t just American public opinion that mostly opposes the president on Netanyahu and Iran. Pro-U.S. regimes in much of the Arab world understand the existential threat they face against a nuclear Iran. These nations — Saudi Arabia, Kuwait, Bahrain, Abu Dhabi, Dubai, Oman, Qatar, Jordan and Egypt — are regarded as apostates by Iran’s theocratic rulers who view them as targets, not fellow Muslim neighbors, possibly because Iran has become the world’s No. 1 exporter of terrorism

These nations are not convinced by the president’s laughable contention that “the world is less violent than it has ever been.” Compared to what? There are none so blind as those who will not see. The Obama administration should open its eyes to a world that is aflame.

President Obama’s defenders say he, not Congress, should shape foreign policy, but that’s not what the Constitution says. The State Department acknowledges: “The United States Constitution divides foreign policy powers between the President and the Congress so that both share in the making of foreign policy. The executive and legislative branches each play important roles that are different but that often overlap. Both branches have continuing opportunities to initiate and change foreign policy, and the interaction between them continues indefinitely throughout the life of a policy.”

Former ABC newsman Ted Koppel once said: “Our society finds truth too strong a medicine to digest undiluted. In its purest form, truth is not a polite tap on the shoulder. It is a howling reproach.”

Israel’s prime minister should offer such a howling reproach to America’s disastrous policy with Iran and the administration’s failure to tell the truth about the threat should Iran go nuclear.