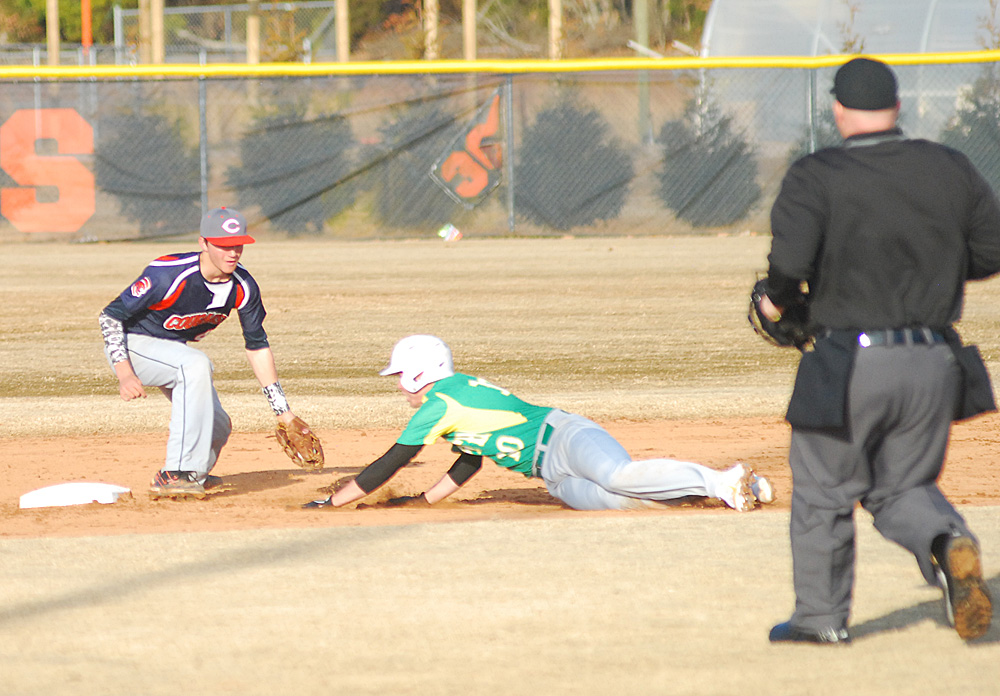 ADAM HOUSTON/SALISBURY POST Carson shortstop Owen White (4) gets ready to tag North Rowan centerfielder Noah Gonzalez (4) on Wednesday in a nonconference game at Carson. The Cougars won 11-0 in five innings. It was the first game of the 2015 season for both teams.

CHINA GROVE — The sun was out. The wind was fierce at times. The temperatures were in the 60s. The first game of Carson’s and North Rowan’s seasons had more of a spring training feel than a regular-season opener.

Carson pitchers Heath Mitchem and Tanner Christy tossed two innings on the mound before switching positions. The Cougars sent 11 batters to the plate and scored seven runs in the bottom of the third to put away the Cavaliers for an 11-0 victory.

“We kind of went into it like a scrimmage,” Carson head coach Chris Cauble said. “We’ve had one practice on the field, and we’ve been trying to do what we can do. …This is just our second time on the field.”

“We were going to try to get this game [against North Rowan] in regardless because we didn’t want our first game to be hard conference games,” Cauble said.

Mitchem worked the first two innings, striking out four and allowing just one hit and issuing one walk, before switching with Christy at third base. Christy, the winning pitcher, worked the third and the fourth innings. He allowed one hit, struck out one and walked one. Kris Peacock pitched a 1-2-3 top of the fifth to end the game.

The Cougars (1-0, 0-0 SPC) were led at the plate by shortstop Owen White and second baseman Matt Saul. White scored the first run of the game in the bottom of the first on Saul’s two-out, two-RBI single.

The game got away from the Cavaliers in the bottom of the third. Carson was up 2-0 at the start of the inning with Lee Sells on the mound. Six of the first seven Carson runners reached base — three on error — and all six of them scored. White hit an RBI double to left field that just made it past the outstretched glove of North Rowan’s Javin Goodine. Saul provided an RBI double as well.

With Carson ahead 9-0 in the bottom of the fourth, Brandon Mock sent a double to the gap in left-center that allowed Grayson Whicker to score from second and Ben Shoaf to score from first.

The Cavaliers (0-1, 0-0 CCC) took the same approach to Wednesday’s game as the Cougars. With limited time on the practice field, it was viewed as a scrimmage instead of a nonconference game to start the season. The final score was not what disappointed Cavaliers head coach Aaron Rimer.

“There was a chance for some people to earn a spot today, and they were kind of tentative,” he said. “That’s the only thing I’m upset about.”

Relief pitcher McGuire Smith was not one of those. The coach was happy the freshman volunteered to pitch after Carson put up five runs with Sells on the mound in the third. Smith was charged with three runs on two hits with a strikeout in the final 1-1/3 inning of the game.

Corbin Smith and Brandon White had the only hits for the Cavaliers.