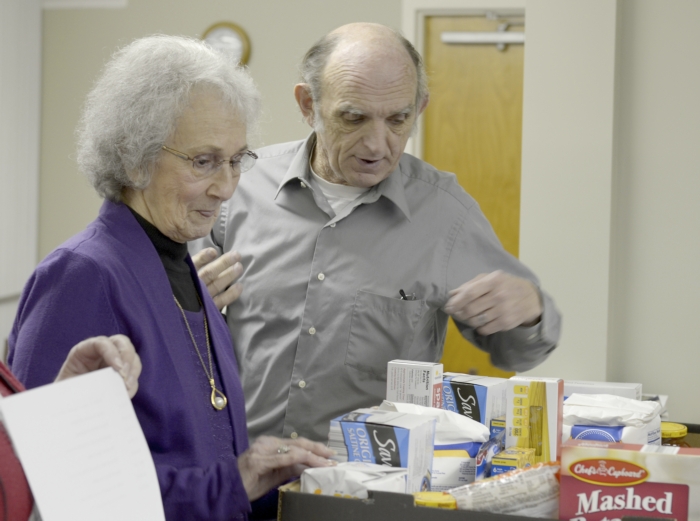 KANNAPOLIS – Although the economy has improved for some, members at Blackwelder Park Baptist Church say they know neighbors in Kannapolis and Landis are still struggling.

Volunteer Sheila McGinnis said her sister and brother-in-law, with other church members, had been instrumental in starting a community food pantry in 2003 to help those who were out of work or facing economic hardship.

But after eight years, McGinnis said, “the economy was falling apart, and we weren’t able to continue it.”

In the four years since the church’s community food pantry was forced to close, members have tried to help on a case-by-case basis, Pastor Phil Goble Jr. said.

This week, after an outpouring of interest from parishioners and friends, the Blackwelder Park Baptist community food pantry will reopen for its first weekly distribution since 2011.

“We feel like we’re off to a good start,” McGinnis said as she, husband Fred and other volunteers gathered Sunday evening.

On shelves and in boxes around them were boxes of saltine crackers, cans of soup and vegetables, instant grits and mashed potatoes – enough to help a number of local families keep hunger at bay.

Thursday, from 9 a.m. to noon, volunteers at the church will distribute food to families who live in Kannapolis and Landis.

A photo I.D. is required, along with a Kannapolis or Landis utility bill as proof of residency.

Although support is strong, church volunteers say they’ll be counting on their friends and neighbors to step up and assist with this important ministry.

After all, feeding the hungry is one of the main tasks Jesus gave the Christian faithful in the Gospels, Goble said. “We’re excited to see that take place right here,” Goble said.

Twenty-three volunteers have worked to gather donations of food and money for over a month, Goble said.

“Those are often the most expensive and hardest for people to get,” McGinnis said.

At present, the church can only accept non-perishable dry foods. Financial contributions will allow the church to buy food in bulk from warehouse stores and grocers, Sheila McGinnis said.

At present, McGinnis said, the church can only serve residents in Kannapolis and Landis.

The decision to target those communities came because there’s already an active food pantry in China Grove and other resources for food aid in Rowan County, McGinnis said.

Volunteers say they hope to expand their hours and include an evening distribution in the future, to better assist working adults and single parents.

“There’s such a need,” Sheila McGinnis said. “A lot of times people will come to us for help and just cry. They say they wish they didn’t have to do this.”

Volunteer Bessie Rodgers said working with the food pantry has opened her eyes to the circumstances that some people face.

“We had one man who was living in a tent, out in the woods near here,” Rogers said.

Even after the food pantry officially closed, Goble said, people would come to the church office and ask for help.

Goble said the church tried to help out as much as they could.

“Being able to open the food pantry again once a week to help the community is very good,” Goble said. “We’re ready and looking forward to serving people who need to eat.”

Although the food they’ve collected in a month’s time fills part of one Sunday school room, volunteers say it will go quickly.

Even so, Goble is confident that the community will respond.

“I’m sure this will grow as word goes out,” he said.

To donate non-perishable canned or dry goods, or to make a monetary donation to the Blackwelder Park Baptist Church food pantry, call the church office at 704-932-4266.