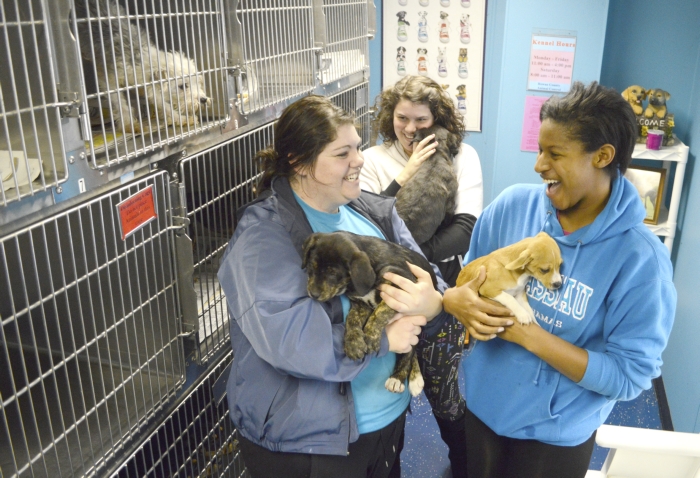 Josh Bergeron / Salisbury Post - From left: Abigail Raffaldt, Bittany Hoose and Sydney Baker lookk for a dog at the Rowan County Animal Shelter. The group of friends decided to spend the day at the shelter to pet dogs, and Raffaldt said she was looking for a barn dog.

This is the second in a three-part series on the Rowan County Animal Shelter.

Rowan County’s Animal Shelter is in the midst of a rapid decline, but its staff and animal advocates are celebrating a success instead of lamenting a loss.

Since 2010, the number of animals euthanized per year at the shelter has sharply declined. The trend is most noticeable over the previous three years.

In the 2013 fiscal year — starting July 2012 and ending June 2013 — 2,640 animals were euthanized. At the time, more animals per year were euthanized at the shelter than adopted. The total number euthanized in the 2014 fiscal year dropped to 1,434. This fiscal year, which ends in June, the Rowan County Animal Shelter is on track to euthanize 843.

Perhaps expectedly, the average number of animals euthanized per month at the animal shelter has also decreased. In January, the latest numbers provided by county government, a total of six animals were euthanized. The highest per-month number provided came in August 2012, when 438 animals were euthanized at the Rowan County Animal Shelter. All euthanizations during the current fiscal year have taken place via lethal injection. Previously, a gas chamber was used at the shelter as a form of euthanasia.

Statistics for calendar years — January to December instead of July to June — also show a rapid decline in the number of animals euthanized annually.

The euthanasia numbers match up with another rapid trend — an increase in adoptions.

“Social media has really increased the adoptions and we’ve worked with great rescues,” said Animal Shelter Director Clai Martin. “The staff has done a fantastic job. It’s just an overall team effort with everybody, but the main thing that’s helped with our adoptions is social media.”

Though Martin didn’t cite it as the primary reason, he also mentioned rescue groups as a cause for the rapid changes. Rowan is home to dozens of animal groups that adopt animals from the shelter, provide some medical care and either find a family or transport the animals to another rescue group. Some groups move many animals at one time. Others serve as a foster parent for one or two animals at a time.

Candace Terry’s group — Friends of Rowan County Animal Shelter — serves a different primary purpose than others, but may be equally as important in the process of getting animals out of the shelter and avoiding an animal’s death.

About three years ago, she started a Facebook page to post pictures of animals at the shelter, which she said filled a social media void.

“The same wiener dog was on the Animal Shelter’s Facebook page for many moons,” Terry said.

She made an agreement with Martin to photograph a few animals each time she visited. She is currently able to remove animals from cages, pet them and do a behavioral check.

The shelter’s Facebook page now is significantly more active, with multiple animal pictures posted per day. A majority of the pictures are of dogs.

Terry also serves as a foster parent for dogs. She and others say most of the animals adopted by rescue groups end up being transported to other groups located in other states, specifically in the Northeast.

“Northern states don’t have the issue that we have,” Terry said. “They’re very strict with spay and neuter programs.”

Because of spay and neuter programs, Terry said shelters and rescue groups in northern states “are clamoring for puppies.”

The aim for the Rowan county Animal Shelter is to eventually become low-kill. Both Martin and Veterinary Technician Jamie Stivers said it is impossible for the shelter to become truly no-kill.

“There will always be some euthanizations,” Martin said.

The Rowan County Animal Shelter accepts any and all animals, such as raccoons, foxes and opossums. Some wild and rabid animals have to be euthanized, Martin said.

But not all animal activists are satisfied with the rates. Many are calling for county government to make policy changes. The changes could make the low rates sustainable and lead to even lower euthanasia numbers, say some activists.

A volunteer program is at the top of the list of animal advocates and a task force that was created by county commissioners last month. The task force is a form of checks and balances, according to animal advocate Mandy Nance. It’s intended to come up with a series of policy changes for the shelter.

Tracy Waugh, who’s involved with Friends of Rowan County Animal Shelter, said enacting a volunteer program could serve as a form of education for potential families.

“Volunteers can help with educating the public on adoptions, redemptions, shelter procedures, adoption process, animal health care and choice of animal per family makeup,” Waugh said in an email. ” Volunteers can plan, organize and execute adoption events to market highly adoptable cats and dogs. This is only one of many programs needed.”

Commissioners said the task force would dissolve after it presents a series of recommendations to county officials.