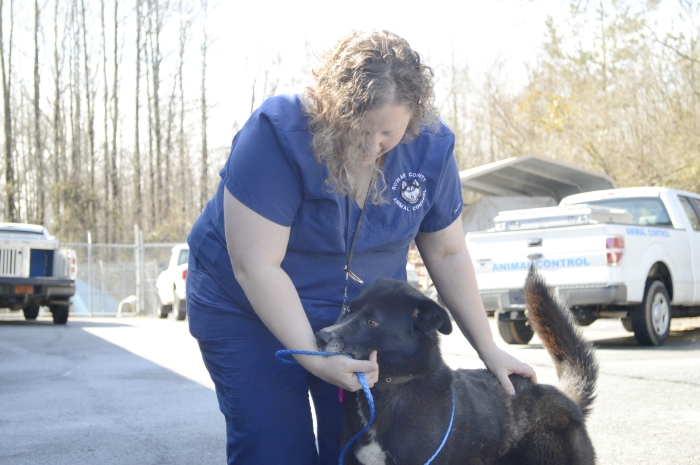 Josh Bergeron / Salisbury Post - Veterinary Technician Jamie Stivers walks one of the Rowan County Animal Shelter's dogs on Monday. The shelter has seen a sharp decrease in its euthanasia rate in recent years partly due to community rescue groups.

This is the first in a three-part series on the Rowan County Animal Shelter.

Dix had rescued animals previously, but a few years ago she decided to rescue one from the shelter. It was her first time. Dix planned to adopt a dog from the Rowan County Animal Shelter to rehabilitate and train before finding the dog a family.

She still remembers his name — Steve. Dix couldn’t tell what breed the dog might be, but he was definitely filthy.

“He was extremely dirty and, I think, he had just come in the shelter,” Dix said. “He was a black and white dog, but with the dirt you couldn’t even tell he had any white on him.”

Dix said she wasn’t choosy about picking a dog to rescue. She adopted Steve and placed him in the back of her truck, which had a camper top. At first Steve seemed like a calm, relaxed dog, but then Dix had second thoughts.

“He barked this horrendous bark,” she said. “And, I thought to myself, ‘What have I gotten into?’ ”

That was day one. After Dix was finished with Steve’s rehabilitation, he seemed like a different dog.

“He just trusted me,” she said. “I was probably the first person he ever trusted. That seems to be the one factor that is a common thread. The animals have a lack of ever having a human to trust.”

Dix, who helps run the group Shelter Guardians, is just one of dozens who are committed to organizations commonly called rescue groups. The basic premise is to adopt an animal from a shelter, provide it with medical care, perhaps some basic training, and adopt it out to a family looking for a pet.

The groups have a noticeable presence at the Rowan County Animal Shelter. In just five years, the number of animals euthanized annually is down about 86 percent. In 2010, 5,649 animals were euthanized. Last year — 2014 — the euthanization number was 739.

Rowan County Animal Shelter Director Clai Martin says it’s hard to imagine what his department would look like without the outpouring of community support.

“It’s just an overall team effort,” he said. “We couldn’t do our job without the rescues and citizens of Rowan County. There’s no way we can take all of the credit.”

For several months now, the Shelter Guardians group has provided intake vaccines to all animals at the shelter. The vaccines protect against sicknesses such as distemper. In dogs, the viral disease can cause eye inflammation, nose discharge, labored breathing, coughing, vomiting, diarrhea, loss of appetite and lethargy.

Providing help for the animals through groups such as Shelter Guardians means that donations go directly to the animals, Dix said. Because the shelter is run by Rowan County government, donations to it are funneled into the county’s general fund.

“The rescue groups do a tremendous job in getting these animals healthy, relocated and put into care by other citizens,” said County Commissioner Craig Pierce. “We would be in a lot worse shape if they weren’t as active as they are.”

Dix’s main focus may be on dogs, but rescue groups in Rowan haven’t forgotten about felines. Wendy Burnette said she’d have a difficult time counting all of the animals she’s helped over the years. And, Burnette is just one of the many that are focused on rescuing cats.

Rescuing cats is similar to canines. Medical costs for shots can add up quickly. And like those passionate about saving dogs, Burnette takes care of a bevy of cats. She has eight cats of her own and three that she’s a foster parent for.

Perhaps unlike most rescue groups, Burnette’s work doesn’t focus primarily on finding homes for animals. Instead, she finds barns.

Burnette spays and neuters the cats, gives them shots and finds farms with feral colonies of cats.

“The people who live out in horse country don’t mind the cats. As long as they’re well-fed, have place to crash and call their own, they’ll only wander so far.”

The feral cats, Burnette said, keep rodents away from farm animals, such as cows.

Dix, on the other hand, says most of her rescues remain local — in or near Rowan.

Many foster groups either run on donations or pay for various rescue-related costs using personal money. The shelter provides for a portion of the cost of spaying and neutering an animal through a voucher. Any additional shots, other than the intake vaccine provided by Shelter Guardians, costs extra.

“I literally owe dogs my life and this is something I have to do in return for what they’ve done for me,” Dix said. “To be honest, when I look back now and see all the great things that are happening, I regret not doing what I’m doing now ten years ago.”

Coming Wednesday: More on the decline in the euthanasia rate at the Rowan County Animal Shelter.