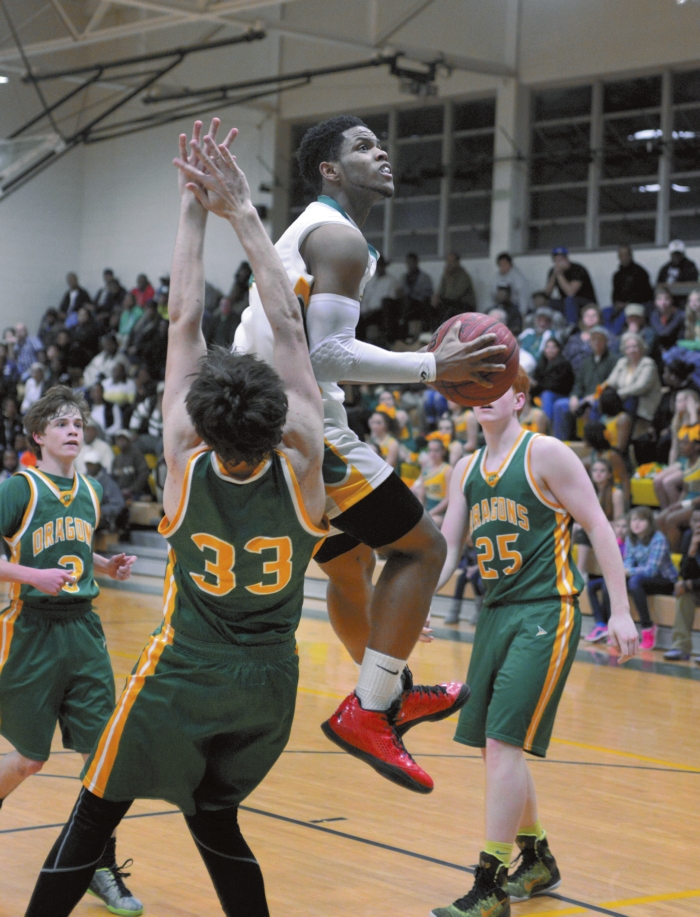 In coach Andrew Mitchell’s five seasons, North Rowan has never lost in the first or the second round of the state playoffs. The Cavaliers are 18-3 in playoff games under Mitchell, a nice run that has included a 2011 1A state title and a 2014 2A state runner-up.

After dispatching CCC teams Salisbury and West Davidson for the third time, things are expected to get more challenging for the Cavaliers in Round 3. On Tuesday, they’ll travel to the Union County town of Marshville to play Forest Hills (20-6) at 7 p.m.

North Rowan has no 6-9 guys and it doesn’t even have a 6-4 starter now that Josh Handy is sidelined with a broken wrist, but the Cavaliers do have Jalen Sanders. Honored prior to the game for surpassing 1,000 points as a junior, Sanders tacked on another 26. He shot well from outside early, scoring 10 in the first quarter. Then he took it to the hole during the last three quarters.

“They play mostly zone against us because they really can’t guard us man-to-man,” Sanders said. “Whenever they did go man, we knew we needed to attack.”

Sophomore Joseph Scott, emerging as a 6-1 inside scoring force, had 21 points, topping 20 for the fourth time this season. Two of his points came when he jack-hammered a Sanders lob for an early 8-0 lead. Sophomore Henderson Lentz was relatively quiet after he went crazy against Salisbury on Friday, but he still had two 3-pointers and 12 points.

West Davidson (12-12) was down 11-0 right away but showed resilience and wasn’t knocked out. North Rowan led 30-14 after Lentz hit a 3-pointer three minutes before halftime, but the Green Dragons started getting to the foul line and cut their deficit to 32-24 at the break.

“Our second group lost their focus right before he half and I think we committed four fouls in 40 seconds,” Mitchell said. “I told them if they’re going to play like that we’ll have to rest the starters with timeouts.”

Scott had a pretty amazing flying scoop shot for a three-point play in the third quarter, but the Green Dragons were still only down 11 after three quarters.

“We’re a small team without Josh Handy, and we’ve really got to focus on rebounding,” Scott said. “The coaches kept telling us we couldn’t slack off, even though West Davidson was a team we’d already beaten twice. This was a playoff game. They weren’t going to give it to us.”

The key moment in the contest arrived with five minutes left. West Davidson was only down 52-43, but the Green Dragons weren’t looking for a moral victory, they were looking to win, and they went man-to-man. Sanders realized it  immediately. Mitchell saw that 5-6 Carson Beane was on Sanders, a powerfully built 6-footer, and he called timeout.

“We have a play — 52 — that we run,” Sanders said. “I passed from the wing and made a cut down low against the smaller defender, and Alexis (Archie) made a great pass. We got the and-one basket that we needed.”

“Sometimes you call a timeout, set up something, and guys make you want to throw up,” Mitchell said with a laugh. “But then sometimes they go out and do exactly what they’re supposed to do. That makes you feel like you can make a run.”

West Davidson, coached by former Catawba football player Derrick Stokes,  fought hard for 32 minutes, even after three players fouled out. Scott Hughes made three 3-pointers and scored 16 points. Tyler Grooms, a physical 6-4 forward, pounded the Cavaliers on the boards at times and scored 13. Beane, a fast point guard, makes the Green Dragons go, but the Cavaliers’ guards held him to two points.

The really hard work begins Tuesday for the Cavaliers. But it’s their time of year.