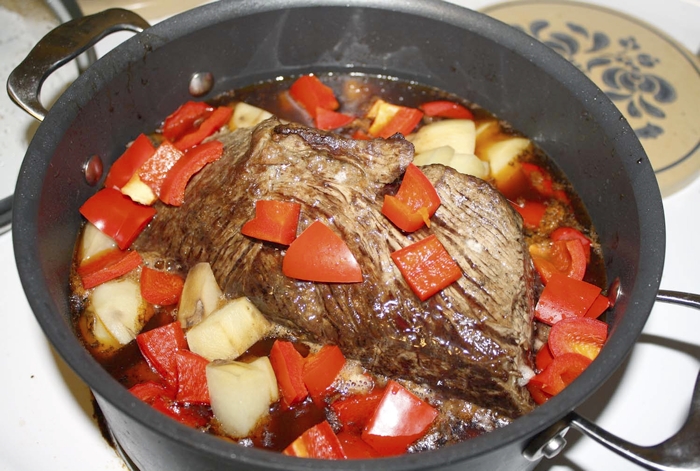 We’re still in for cool nights or weekends when we want something easy and satisfying on the stove.

On one of the snowy cold nights last week, I started to think about my grandmother’s pot roast. It was warm and rich, it had lots of flavor and there were lots of potatoes and carrots on the side.

Pot roast is slightly regional. Yankee pot roast is what my grandmother, whose parents came to America from Ireland, fixed. It has carrots, potatoes, sometimes pearl onions and a hint of tomato. She was lucky enough to have a butcher she trusted, so she ordered the best cuts of meat she could afford.

My family lived with my grandparents when I was very young, and most of my memories of her are in the kitchen. I was too young to learn how to cook, but I think I have her cooking genes

Granny used eye of round or rump roast, in my recollection. Something without much fat.

Southern pot roasts, or roasts for the slow cooker typically use chuck roast, which is tough, but flavorful, with fat streaked throughout the meat. Long cooking melts that fat and makes the meat juicy. Chuck roasts sometimes fall apart or easily break into shreds after cooking.

As for cooking methods, well, it is a POT roast, so doing it on top of the stove is fine, and probably takes less time than a slow cooker. Doing it in a slow cooker, however, can help with tenderizing the meat, and you’ll get plenty of liquid from that method. You can also start it on the stove and finish it in the oven.

But the basics are these: You much brown your roast on all sides with plenty of salt and pepper. Vegetable oil is the best choice because it can take the heat.

You need to include plenty of flavor that will last during that long cooking period.

Vegetables are not a must, but cooking them along with the beef gives both good flavor.

My friend Jerry, who’s cooked lots of meals at church, does his roast in the oven. It’s a chuck roast, with or without vegetables, such as tomatoes, carrots, onions. He covers it with foil and adds maybe a 1/4 cup of water. If he wants gravy, he uses a can of cream of mushroom or golden mushroom soup.

Ask a handful of people how they fix pot roast and you’ll learn everyone has their own touch.

One coworker uses a packet of onion soup mix, another uses a beef stew flavor packet and another adds a dried pod of cayenne pepper on top and maybe a little red wine before letting is simmer all day in the slow cooker.

Ahh — to wine or not to wine? Red wine adds depth of flavor and acidity to a rich dish. Granny used vinegar, saving the wine for drinking. You’d need a sturdy red, like a merlot or cabernet sauvignon to amp up the flavor, but not something expensive. The alcohol will be cooked away by the time you serve it, but it also helps tenderize the meat.

Some people brown the meat first, others just put it in the pan and go. Those who do brown often put a light dusting of flour over the meat to help it brown and help make a thicker sauce. In this gluten-free era, though, it’s not necessary to add flour. The meat can brown nicely in a hot pot with a little oil.

Pot roast is a flexible dish, so if you don’t like ketchup, as in Granny’s recipe, you can use tomato paste. You could add cut up onion or frozen or jarred pearl onions. Mushrooms are nice, too.

1 3-4 pound eye of round or bottom round roast

2 large or 3-4 smaller carrots, peeled and cut into bit-size pieces

Clean and cut potatoes and carrots and set aside. Cut pepper into strips or bite-size chunks, set aside. Dry roast with paper towels and sprinkle liberally with salt and freshly ground black pepper on all sides. Heat the oil in a Dutch oven till just starting to smoke and add meat, fat side down, to begin browning. Do not move the meat until ready to turn to another side.

Once beef is browned, turn down the heat to medium and carefully add the vinegar and water. Add the ketchup, Worcestershire and Kitchen Bouquet and put the bay leaf down in the liquid. Add potatoes first, then carrots, then the peppers, and push as much down in the liquid as possible. If necessary, add up to 1 cup additional water.

When the meat is tender, remove it from the pot and set on a cutting board or plate, covered with foil. Remove vegetables and juices to a boil. After the meat has rested 10-15 minutes, slice and serve with vegetables.

This version is gluten-free.

If you want to thicken the juices into a gravy, mix 2 tablespoons softened butter with 2 tablespoons flour into a soft paste or dough, as if making biscuits. Bring the liquid back to a boil and stir in the butter-flour mixture. It will thicken the gravy in just a few minutes. Cook another minute or two to ensure the flour is cooked and serve.

Look for Kitchen Bouquet in a small bottle near the packaged gravy.

Saute onion in 1 Tbsp. oil until soft. Add celery and garlic cloves and saute about a minute. Remove from pot and add additional tablespoon oil and brown meat on all sides. Return onion mixture to pot and add thyme, rosemary and bay leaves and broth. Bring to a boil, then reduce heat, cover and simmer 2 hours. Add mushrooms and simmer another 30 minutes. Remove thyme, rosemary stems and bay leaves before serving.

This recipe can be put in a slow cooker after browning the meat and sauteing the vegetables.

2 medium onions, each cut into 8 wedges

In the slow cooker, stir together the cornstarch with 2 Tbsp. cold water until smooth. Add carrots and onions, season with salt and pepper and toss. Sprinkle roast with 1 tsp. salt and 1/2 tsp. pepper, place on top of vegetables and drizzle with Worcestershire. Cover, cook on high 6 hours or 10 hours on low.

Transfer roast to a cutting board and slice thinly against the grain. Place vegetables in a serving dish. Pour juices through a fine-mesh sieve, if desired. Serve roast with vegtables and pan juices.

Variations on a theme:

• Add parsnips or turnips to the pot while cooking.

• Use a packet of dried soup mix to season the meat, such as onion soup.

• Use a packet of ranch dressing mix to season the roast.

• Add Mediterranean flair to the pot with kalamata olives and raisins.

• Make it Italian and use a can of whole tomatoes and dried or fresh oregano. Add diced eggplant during the last 1/2 hour of cooking.

• Make it Southern and add sliced zucchini and yellow squash to the mix.

• Omit potatoes and serve over brown or wild rice.