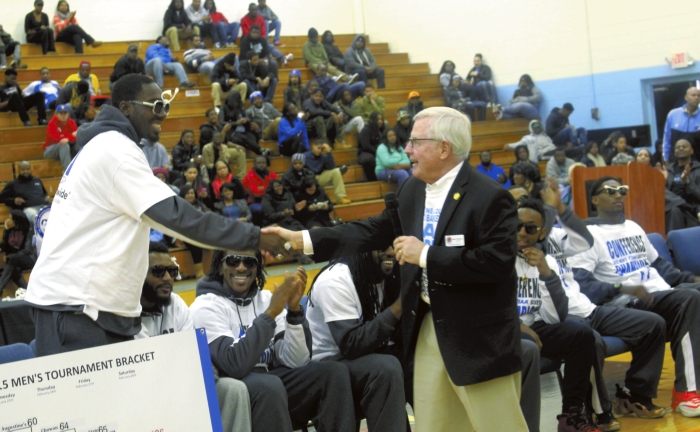 In a jubilant celebration that featured local politicians, the senior bishop in the AME Zion Church, good food, cheerleaders, the marching band and about as much school spirit as you’ll ever see, Livingstone College celebrated its second, consecutive men’s CIAA title Sunday afternoon in grand fashion inside Trent Gym.

Ironically, when Livingstone won the CIAA title last year, for the first time in school history, their opponent was also Winston-Salem State and the margin of victory was also 15 points.

Before introducing the players and coaches, game announcer Sylvester Kyles, Jr. joked that Blue Bears fans “are spoiled now” and the team has to keep winning the title.

Athletic Director Andre Springs thanked the crowd for their support, commended Head Coach James Stinson, Jr. and the players on their win and said it was a blessing.

Then Springs turned the microphone over to an ecstatic Jenkins, who said Saturday’s win was historic.

“I can’t say enough about this coach,” Jenkins said as he turned to Stinson. “First of all, he’s a God-fearing man. He’s stoic, and he’s as cool as a cucumber. We’re creating a dynasty at this institution.”

At times the applause and cheers were deafening inside Trent Gym, like when Head Women’s Basketball Coach Anita Howard, and First Lady Dr. Faleese Moore Jenkins, who Stinson calls his number one fan, were asked to stand.

When he spoke, Stinson began as he always does by saying to God be the glory. Then he said the win was much bigger than Livingstone.

“This is for the city of Salisbury, for the county, for the alumni, etc.,” Stinson said. After recognizing his family members in attendance, including his 10-year-old niece Jayla Lewis, who proudly wore a Livingstone T-shirt during Saturday’s contest while cheering for her uncle’s team, Stinson talked about the adversity the squad faced all season.

Stinson said this is the first season he recalls in recent memory when fans didn’t walk out on the team when they were losing – including at their final home game of the year, when they were down 19 to Winston-Salem State but eventually won 86-83.

“I’m a Charlottean, and it’s good to go home and win the CIAA,” Stinson said. “More importantly, we’re trying to cultivate these young men into being good citizens, because at the end of the day, one day they’ll stop playing basketball.”

Bishop George E. Battle, Jr., Chairman of the Livingstone College Board of Trustees and a 1969 graduate, said he remembers when Winston-Salem used to soundly defeat the Blue Bears. Joining him at the celebration was his wife Iris Miller Battle.

“I don’t say God has any favors, but I declare he likes Livingstone,” Battle said to loud applause. He also reminded the players, coaches and everyone in the gym that the battle isn’t won by the swift nor the strong but he that endureth to the end.

“You can’t understand what I feel right now,” Battle said. “After all those years, to (finally) win one championship and then to turn around and win two…”

Woodson, who donned a championship T-shirt, told the players and coaches the city was proud of them and they’ve “brought a lot of life to the city of Salisbury.” Woodson also recognized Daresse Johnson, a senior small forward who graduated from his alma mater, New Hanover High School in Wilmington.

In a poignant tale that included asking the piccolo player from Livingstone’s band to come to the floor, Edds reminded everyone that when people give their best – no matter their role on the team or in the organization – everyone succeeds.

The festive celebration ended with the singing of “Oh, Livingstone,” after which food was served and people took photos with the players and coaches.

Local schools, daycares to pledge not to use the…