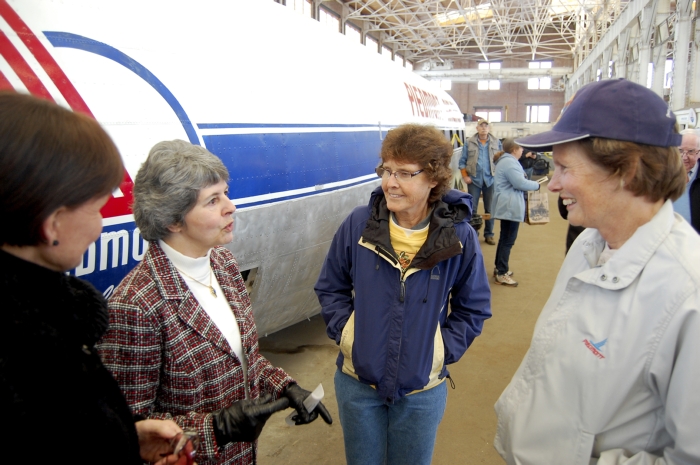 Cheryl Peters, second from left and who was the first female pilot for Piedmont Airlines, talks with former Piedmont pilots Cheryl Stearns, middle, Lucy Young, right and Connie Tobias. Peters spoke about her career Saturday at the North Caroina Transportation Museum in Spencer. The museum is currently restoring a 1942 DC-3 airplane, background, that was used by Piedmont Airlines.

The audience for Peters’ talk was filled with friends and former colleagues at the airline that was based in Winston-Salem before merging with USAir, now US Airways, in 1989.

Peters, who was hired as a pilot in 1974 and retired in 1995, spoke about her journey from being a flight attendant with Eastern Airlines to a commercial airline pilot and then captain.

After growing up in Roanoke, Va., she became a flight attendant with Eastern in the mid-1960s when she was about 20. She was based in Miami, and when she wasn’t working she spent her time riding motorcycles and driving sports cars.

She even got into sky diving.

“Speed” was the reason why. Peters said she always liked to go fast.

“Adventure was my middle name,” she said.

But when the airline machinists went on strike in 1966, Peters found herself out of work. She went back to Roanoke and “somehow” convinced her father to let her take flying lessons.

“Probably turned out to be the best economic decision he made,” she said.

After the strike ended she returned to being a flight attendant and continued taking flying lessons in Miami, earning her private pilot’s license in 1967.

Peters became a flight instructor and flew chartered flights — earning every civilian pilot rating there was to earn.

In 1973, Emily Howell Warner was hired as a pilot for Frontier Airlines, opening up an opportunity for Peters — one she had never really thought about.

At the time, being a pilot for a commercial airline — as with many professions — was a male dominated job.

Peters said she was never trying to be a “pioneer” or break down gender barriers. She loved flying and wanted to find a way to make a career out of it. She first envisioned herself as a crop duster, she said.

Someone once told Peters being a liberated woman meant “somewhere out there, there’s an empty kitchen.”

She said the man was kind and conducted a thorough interview. But at the end she had to fly a Boeing 737 simulator on manual — meaning she had to fly without hydraulic assistance.

“Well, I passed that test,” she said.

After she was hired, Peters said, things were more different for Piedmont than for her. The company had to find a different doctor to give her a physical, and it didn’t have provisions for double standards.

Peters had to wear the same uniform as male pilots, and she had to cut her waist-length hair.

Later, when other women joined the airline as pilots, a women’s uniform was introduced, but Peters wore the men’s uniform, including a tie, for her whole career.

She still has the uniform, complete with the clip-on tie she used.

She said she wasn’t trying to make waves and didn’t want priority treatment. She avoided interviews with magazines such as Cosmopolitan. Retired pilot Bill Wilkerson, right, who flew for Piedmont Airlines, leads a tour of the restoration of a DC-3 airplane used by Piedmont Airlines. Wilkerson is part of a group of volunteers working to restore the plane.

Peters was first based in Norfolk, Va., flying a YS-11 turboprop airliner. As is standard, Peters started as a co-pilot. She said the captain on her first flight was quiet and at the end of the flight told her he didn’t mind flying with her but that he didn’t know what to talk about.

“Most of us guys talk about women in the cockpit,” Peters said he told her.

“Well, what would you like to know about women?” she asked him, adding it was a great ice breaker.

Peters said she never felt out of place with Piedmont and that the other pilots and flight attendants always treated her with respect.

Some passengers, primarily women, had reservations about a woman being a pilot, Peters said, but she received praise from others. She read letters sent to Piedmont from people who were passengers on her flights.

“She can fly me to the moon or anywhere,” one letter, from a passenger who found out the captain was a woman after they had landed, read.

Women can do the same job as men, Peters said.

When she became a captain, there were men who didn’t like the idea of being co-pilot to a woman. But Peters said the issue didn’t last long once her co-pilots realized she was there for the same reason they were — a love of flying.

Peters, who now lives near Atlanta, said she never joined any of the pilot organizations for women because she never liked the idea of being considered “separate but equal.”

“I was a pilot. I was female. But I never wanted to be considered a ‘female pilot’ … just a pilot,” she said.

Her husband, Phil, was also a flight captain, and they did fly together on occasion.

She praised the pilots and crews she worked with over the years. She was the captain, flying a Boeing 737, of the first all-female crew for Piedmont in the early 1980s.

“I couldn’t have been associated with a better group of people than Piedmont Airlines people,” she said to applause from the crowd of around 100, many of whom were Piedmont employees.

Peters said she doesn’t fly anymore, and that she’ll always look back at her time with Piedmont Airlines as a special period in her life.

“I wouldn’t have traded those years for anything,” she said.