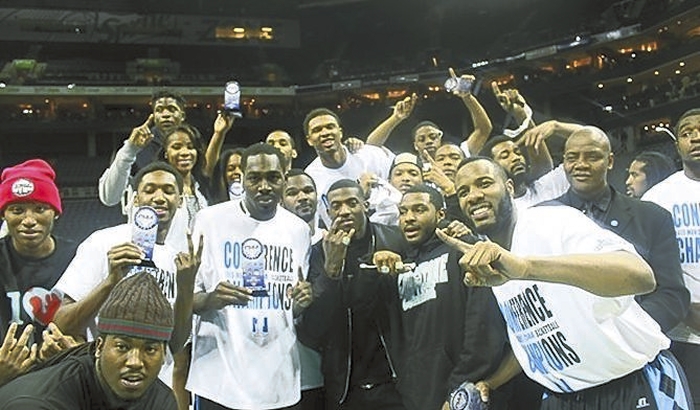 Livingstone’s 2015 champions are considerably bigger, deeper and more talented than the team that won the CIAA championship last year, but chemistry is everything.

Livingstone tried a lot of different lineups, different rotations and different combinations early, as coach James Stinson tried to figure out how to blend several talented transfers with returning standouts such as Eric Mayo and Eric Dubose.

There was a discouraging stretch in December and January when the Blue Bears dropped three straight games by one point.

When Livingstone was whipped at home by Virginia State on Jan. 10,  their record was only 8-6, and everyone was wondering what was wrong with the Blue Bears.

But it was only a matter of time and of guys accepting roles. Ty Newman, a transfer who is a great ball handler, shooter and passer, was clearly one of the Blue Bears’ best five, but he made the biggest sacrifice, becoming that guy off the bench who could come in and change the flow of games.

David Williams also sacrificed, focusing more on rebounding and defense than on his scoring. The Blue Bears had enough scorers.

The final piece to the puzzle appeared on the floor on Jan. 3, when guard Daryl Traynham debuted. Traynham’s ball handling skills off the bench created transition opportunities and freed Dubose to look to score more. Then the Blue Bears really started to roll.

Livingstone won its last six home games, including the regular-season finale in which the Blue Bears wiped out a 19-point deficit against Winston-Salem State in the final seven minutes, outscoring the strong Rams 32-10 down the stretch, to earn a tie for first place in the Southern Division.

That unbelievable comeback at New Trent Gym on Senior Day provided all sorts of momentum going into the CIAA tournament. In Charlotte, the Blue Bears drilled Lincoln, Bowie State and Winston-Salem State, winning by 14, 18 and 15-point margins, against three of the better teams in a very competitive conference. Livingstone had lost road games to all three of those teams during the regular season.

In the 106-91 win against Winston-Salem State in the final, the Blue Bears shot 58 percent and topped 100 points for the first time since November. How good were the Blue Bears? The Rams shot 60 percent in the second half — and lost ground. Winston-Salem State had three players with 20 or more points and still got beat handily. Livingstone had too much bench and too much rebounding.

“The guys get tired of me talking about last year’s players,” Stinson said. “They wanted to etch their own history.”

The Blue Bears (19-9), who did it inside in the first half and from outside in the second half, were the first CIAA repeaters since Johnson C. Smith in the 2008 and 2009.

“We did it — it means the world right now,” Mayo said.

Livingstone got 44 points off the bench, and Newman, who didn’t make the All-CIAA team, was named the tournament MVP.

Mayo, who averaged 16 points and 11 rebounds , and Dubose, who scored 48 points,  joined Newman on the all-tournament team.

“We can celebrate now but then we have to get prepared to play in the national tournament,” Stinson said. “Our ultimate goal is to get to the Sweet 16 or Elite Eight. We want to continue playing the way we have been playing of late. We have to do the CIAA some justice in getting the job done. The team is starting to see what they can achieve if they play together.”

Livingstone held a pep rally on Sunday and celebrated with supporters. The Blue Bears will play in the Atlantic Regional and will find out their destination and opponent on Sunday, March 8.