NASCAR: Gordon back where it all began 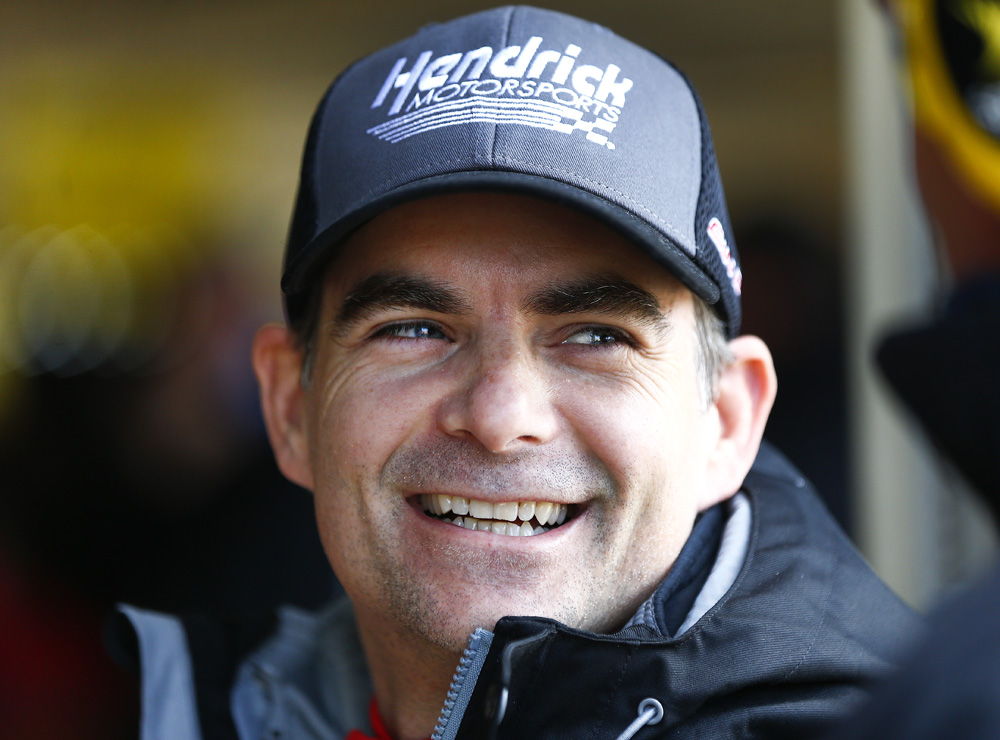 The Associated Press Jeff Gordon smiles as he speaks in the garage Saturday during a practice session at Atlanta Motor Speedway ahead of Sunday's QuikTrip Fields of Honor 500.

HAMPTON, Ga. (AP) — Jeff Gordon admired his latest retirement gift — a miniature race car for his two young children — and thanked the folks at Atlanta Motor Speedway for not going with the obvious choice.

“I really appreciate it not being a rocking chair,” Gordon quipped.

There’s enough time for that.

On Sunday, Gordon will relish one final spin around the track that’s meant so much to his brilliant career.

Atlanta was the place where Gordon, a few months shy of his 21st birthday, picked up his first NASCAR victory in what was then known as the Busch Grand National Series, beating some of the biggest names in the sport in 1992.

“I wasn’t racing against any slouches that day,” Gordon recalled. “Mark Martin. Bill Elliott. Dale Earnhardt Sr. Those were the three guys I had to battle with to win that race.”

Rick Hendrick was watching that day. Impressed with
Gordon’s performance, he put the youngster in one of his Cup cars for the final race that season, once again at Atlanta.

Everyone knows the rest of the story.

Gordon took over a full-time ride at Hendrick the following season, captured the first of four Cup titles in 1995, and is now at 92 career victories, third-most in the history of NASCAR’s top series — trailing only Richard Petty and David Pearson.

“This place has done so much for me,” said Gordon, who is retiring at the end of the year.

That first Cup race is especially poignant, even though Gordon finished far back in 31st place. In what would go down as a seminal changing of the guard, his debut came on the same day that Petty raced for the final time.

“I’ll always remember that drivers’ meeting,” Gordon said. “The faces in there, beyond the drivers, was pretty impressive. I still have that money clip that Richard handed out that day to all the drivers with their starting position. I wasn’t that proud at the moment, because I started 21st. But I’ll remember that forever.”

He’d prefer to forget his final qualifying run at Atlanta. Gordon was among 13 cars — four of them former champions — who never got on the track because their cars didn’t pass inspection. He called the situation “absolutely embarrassing,” even though he made the race based on owner points from 2014.

Joey Logano didn’t have any problems. He turned a blistering lap of more than 194 mph to take the pole, looking very much like a driver capable of following up on his season-opening victory in the Daytona 500.

“Hopefully we can finish where we start,” said Logano, who settled for second behind Kevin Harvick in Saturday’s Xfinity Series race.

While Daytona is the biggest race of the year, Atlanta is viewed as the real opener, the first event under a new rules package that reduced horsepower and cut down on drag.

The speeds were actually faster in qualifying than they were under the old rules package, but that was largely due to brisk temperatures expected throughout the weekend in Atlanta. The race was previously held on the sweltering Labor Day weekend, before shifting to an early spot on the schedule.

This track, one of the most historic on the Sprint Cup circuit, once hosted two races a year. But dwindling attendance cost Atlanta one of its races, and now it’s given up a prime spot on the schedule.

The drivers hope Atlanta keeps at least one race on the schedule. It’s one of the most challenging tracks in the series, notoriously tough on tires and providing all sorts of potential racing grooves.

“This is a racetrack that needs stay on our schedule,” said reigning Cup champion Harvick. “It’s great place to race. It’s got to be a fun place to watch a race.”

Harvick had the second-fastest qualifying speed, but he will have to move to the back of the field after blowing an engine during Saturday’s practice.

He didn’t seem too concerned.