‘Dressing Downton’ exhibit runs through May 25 at Biltmore House 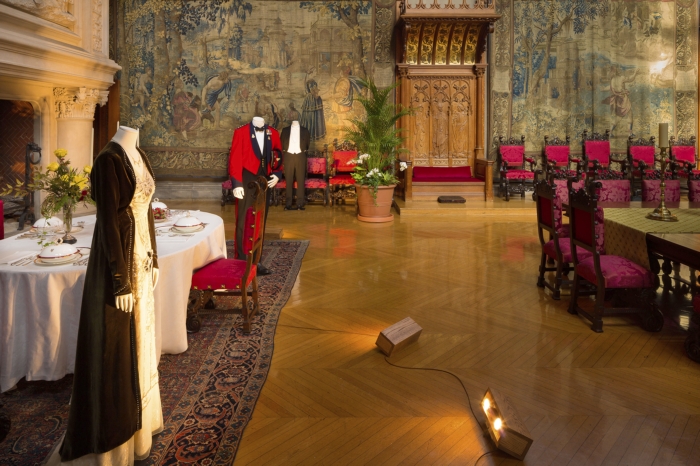 Lord and Lady Grantham are located in Biltmore's Banquet Hall. Lord Grantham’s dress uniform with red jacket was based on a 1912 Indian Guides officer’s uniform. The military regiments featured in Downton are inventions; their crests and regimental badges are fictional, but based on authentic examples. Cora’s beaded dress with green velvet jacket, worn for the first time at the hospital’s Charity Concert. This was designed as a “tea” dress – a loose and comfortable dress worn for entertaining friends. In the back of the room is the Butler, Mr. Carson, evening suit; made of fine wool, worn for a dinner service in the dining room. Photo Credit: The Biltmore Company

ASHEVILLE — It’s not every day you get to hobnob with royalty in seemingly endless rooms of a castle.

You can at Biltmore House.

A new exhibit, “Dressing Downton: Changing Fashion for Changing Times,” opened at the Asheville estate earlier this month and continues through May 25. Nearly four dozen costumes from the wildly popular British television series, “Downton Abbey,” are on display throughout the house.

Simple mannequins help underscore the fact that real people lived in this house, and give you more of a sense of scale in this grand home. Biltmore House opened on Christmas Eve, 1895, so the Vanderbilts lived in the home during the same time the series takes place, the early years of the 20th century.

“Both our staff and our guests have given incredibly positive feedback,” says Salem Bombace, public relations coordinator for Biltmore. “Everyone agrees that this exhibition was a wonderful fit for Biltmore. When guests see the costumes they’re very impressed with the quality and craftsmanship that went into making them. Seeing the costumes in the rooms truly brings the house to life.”

The estate has recently released a new audio tour, and combined with placards made especially for the exhibition, you can get a marvelous sense of the history of this time period. The house provides an elegant backdrop for gorgeous costumes. Fans of “Downton Abbey” should immediately recognize some of the more memorable outfits.

The first outfit you see in the Billiard Room belongs to Lady Mary. The crimson gown is breathtaking not only in its beauty, but also because of the fact that’s the outfit Lady Mary wore the night she met the Turkish diplomat — a night that ended badly for her, to say the least (not to mention the Turkish diplomat).

The show-stopping black and gold coat with fur trim worn by the flamboyant Martha Levinson, Cora’s mother, upon her arrival at Downton, is here. (Shirley Maclaine plays the character with such panache.) It can be found in the Claude Room, named for artist Claude Le Roi.

The exhibit was developed in cooperation with Cosprop Ltd., London, the company that created the Downton wardrobes, and it’s obvious the care that was taken to select outfits for each of the stunning Biltmore rooms.

Sometimes it almost seems as if a costume was made for a specific room. For example, the Tyrolean Chimney Room features Cora’s ivory dress worn at Edith’s wedding (yet another ill-fated event). Its coat was made from a 1920s tablecloth with a lavish embroidered border, and compliments the chimney perfectly with its tones of red, pink and rose.

“Three members of Biltmore’s curatorial team met to review the list and some costumes were just a natural fit with certain rooms,” Bombace says. “Clothing during this era was very specialized. As you see on ‘Downton Abbey,’ certain types of clothing were worn for each time of day. The same is true for spaces in Biltmore House. For instance, afternoon tea was often taken in the Tapestry Gallery, with breakfast and lunch in the Breakfast Room. What was interesting was how well many of the pieces naturally coordinated, in terms of color and texture, with the room in which the activity would have taken place during the Vanderbilts’ time at Biltmore.”

If it seems like a full-time job getting dressed for each event, it was, according to Lady Mary Crawley.

Here’s a quote from Lady Mary included in the exhibit: “Women like me don’t have a life. We choose clothes and pay calls and work for charity and do the season. But really we’re stuck in a waiting room until we marry.”

The Salon displays a summer linen suit worn by Lord Grantham for a garden party. Lady Grantham’s coordinating outfit includes a cream silk day dress and matching coat with black frogging. There’s also the Dowager Countess’ oft-seen purple day dress. Even without the countess wearing it, the outfit itself captures the fact that she’s a force with which to be reckoned.

“Downton Abbey” weaves together fictional characters with actual events. As stated in the exhibit information, “Lord Grantham was not alone among British aristocrats in seeking marriage to a wealthy American heiress as a sensible move in that it brought about a new source of income to the Downton estate.”

Matthew and the rest of the family get swept up in the events of World War I, and the late 1920s continue to bring change to the Granthams and their estate.

In the Music Room are more somber outfits worn by the Granthams during the war, when their home was made into a place for convalescing soldiers. During a concert for the soldiers, we discover that Matthew was not missing in action after all, and the uniform he wore home is in this room.

The costumes are a combination of vintage clothing, completely new clothing made especially for the show, and clothes made from pieces of vintage panels or material. Only on very close inspection can you see the “patina” of one outfit is different from a newer piece of clothing.

The clothes in the exhibit reflect the shift from the corseted, conservative Victorian era to the looser, freer feel of the Jazz Age. There are plenty of old-fashioned costumes worn by the inimitable Countess Violet, and you’ll also see the young, vivacious Rose’s flapper outfits.

On the Third-Floor Living Hall is a silk velvet evening dress worn by Lady Rose. Close by is an evening suit, white tie and tails, worn by Jack Ross, the black jazz singer that caused such a stir at Downton. In this room is also the gray velvet formal dress worn at court by Lady Cora to meet the king and queen, along with intricate clothing worn by minor characters for the same event.

In the Library, you’ll see a dusty pink silk evening dress with black overlay, worn by Lady Mary. It shows a hint of the coming Art Deco style.

The men of Downton are not given short shrift. You’ll see many outfits worn by Matthew Crawley, Lady Mary’s ill-fated love. (There are myriad ill-fated characters and events in “Downton Abbey,” no doubt the reason so many viewers are so addicted.) There is of course evening attire — white tie and tails — along with wool plaid suits and hunting attire and more. You’ll see Branson’s dark green chauffeur uniform he wore before his marriage to Lady Sybil.

The servants at Downton are also represented in the exhibit. You’ll see Carson’s white tie and tails displayed against a huge tapestry in the Banquet Hall, along with Lord Grantham’s impressive red dress uniform jacket and black pants with red piping. The regiment in which he served is made up, but the outfit is based on authentic examples. Mrs. Patmore’s work outfit can be found in the Kitchen, and Mrs. Hughes’ plain black dress — complete with her ubiquitous house keys — is on display in the Servants’ Dining Room. There’s Mr. Bates’ valet attire, a thick green apron and half-sleeves, along with the footman’s uniform worn by the vile Mr. Barrow.

The winter months are a perfect time to visit Biltmore. The estate stands out even more against the starkness of the winter landscape. The crowds are also smaller, although the day I visited, the numbers increased as the morning wore on.

The exhibit does not have timed tickets, but it’s good idea to visit early on a weekday morning. If you plan to come during the weekend, come early. If you listen to the audio tour and read all the placards, you’ll need a good two or more hours to soak in the exhibit. Bombace says that there’s definitely an increase in visitors, thanks to visits from from “Downton Abbey” fans from all over the country.