Crime Trends, what the numbers show 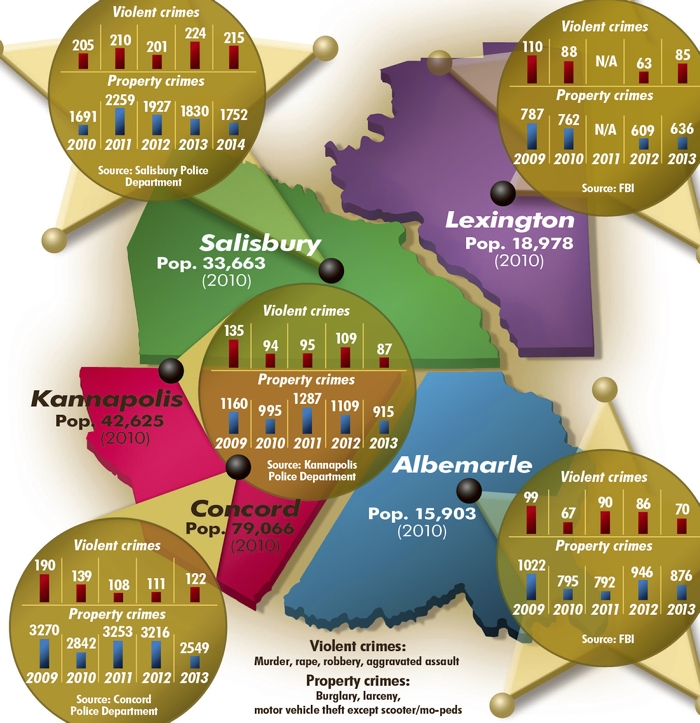 When Jason Monroe arrived at his Salisbury home in early January, thieves had broken a back window, reached in and pried open his back door.

The thieves took his change bucket, leaving a trail through a wooded area near his home. A week after his home was broken into, thieves took a handgun that was registered to Monroe.

His chances of becoming a victim of property crime is one in 16, according to state and national statistics.

Monroe, 29, like many victims of home burglaries, felt violated.

“I was upset when it happened, more or less,” he said.

Monroe said he was upset that his home was broken into twice within a few days, but he doesn’t fault anyone. He was just grateful nothing more was taken and he wasn’t home when it happened.

“Things happen to people that are unjustified and justified,” he said.

Incidents like what happened to Monroe have increased in Salisbury throughout the last five years. In 2014, there were 1,752 property crimes in the city of Salisbury, compared to 1,691 in 2010.

The Salisbury Post took a look at five cities — Salisbury, Albemarle, Kannapolis, Concord and Lexington — to examine trends in violent crimes and property crimes in a five-year period, from 2009 to 2013. The statistics were gathered from the FBI’s Uniform Crime Reports and from the departments themselves.

The crime reports are submitted by the agencies to the state and are then presented to the FBI. The statistics for 2014 have yet to be compiled and verified by the FBI. Salisbury Police provided crime statistics they compiled from 2010-2014.

Violent crimes, for statistical purposes, include murder and non-negligent manslaughter, forcible rape, robbery and aggravated assault. Property crimes include burglary, larceny-theft, motor vehicle theft and arson. Most local police agencies do not include scooter and mo-peds as motor vehicles because of the speed and engine size; however, the SBI and FBI do.

Kannapolis and Salisbury are the closest in population based on the five cities viewed.

Kannapolis saw a decrease in violent crimes over a five-year period, going from 135 incidents in 2009 to 87 incidents in 2013, the most recent available statistics.

The Kannapolis Police Department reported an overall 35.5 percent decrease in violent crimes in the five-year period. It also saw one of the greatest decreases in property crimes, 21.1 percent.

“Kannapolis is blessed with citizens who are used to living in a safe and stable community and they expect a high level of service,” Chavis said. “Communication between our officers is critical, so when a hotspot is identified they coordinate their efforts to deal with it.”

He said Kannapolis does not have a formal community policing program.

“We do have a strong relationship with our community watches and communicate well with all of them,” he said.

Officer liaisons are assigned to each watch, and the department keeps them informed on trends and what to look for.

Chavis said police continually tell residents if they “see something that doesn’t look right, say something.”

“Information obtained from our citizens has helped us to quickly identify small problems and eliminate them before they become big ones,” Chavis said.

He also attributes the department’s social media sites, Facebook and Twitter, Kannapolis 911, to provide them with a lot of helpful information.

“Our participation in Project Safe Neighborhoods has truly helped us to keep violent gun offenders off the streets,” Chavis said.

Concord, the biggest city of the five studied, had the highest number of property crimes for a five-year period, followed by Salisbury. However, Concord had one of the greatest decreases (22.05 percent) in violent crimes for the period.

Lexington, one of the smaller cities studied, had the lowest overall number of property crimes over a five-year span.

None of the other cities surveyed had more violent crimes in a five-year span than Salisbury.

“I wish we could bring our community a significant decrease in crime all across the board. That would be the desire of any police chief,” he said.

He said his department has applied significant resources toward preventing crime, including restructuring the department, implementing technology and grassroots campaigns to reduce crime.

The police department restructured the agency’s Police Interdiction Team, initially set up in 2011 and changed to put more officers on the streets.

The efforts the police made to increase the visibility in the neighborhoods changed from districts to a quadrant system, which put more officers in a given area, Collins said.

“Community policing is a partnership. It involves the community. Our success is dependent upon help from the community,” Collins said.

Collins said the agency has worked hard to gain the trust of the community.

“The more success and progress we have toward that goal, the more people feel at ease to call us,” he said.

Population has a direct correlation with crime, Collins said, pointing out that communities with a greater population usually have a greater number of criminal incidents.

Collins said Salisbury’s population is bigger than a smaller community’s, which speaks to why Salisbury would have more crime.

“We have the same crime as Charlotte, but not as much. It’s bigger,” Collins said.

He said Salisbury’s high crime numbers can be attributed to a number of factors, including the fact that there are people who travel down the Interstate 85 corridor, commit crimes and continue down the highway. There are times  when crime spikes in direct correlation with the release of individuals from prison, he said.

He mentioned Joseph Patrick Lightsey, arrested and charged a week ago for a number of vehicle and building break-ins in several Salisbury neighborhoods. Collins said the police department can see a spike in vehicle break-ins the minute Lightsey is released from prison. Lightsey has a history of breaking into unlocked vehicles.

Collins said addiction also drives crime, specifically those who may steal copper in order to recycle it for cash and then purchase drugs with the money. The economy and joblessness also drive crime within the city, Collins said.

When residents hear about crime happening in the city, they immediately think the community has major issues, but Collins said, read the newspapers and watch the news about other cities and “you’ll see every community is experiencing criminal activity.”

“It’s not just isolated to our community,” he said.