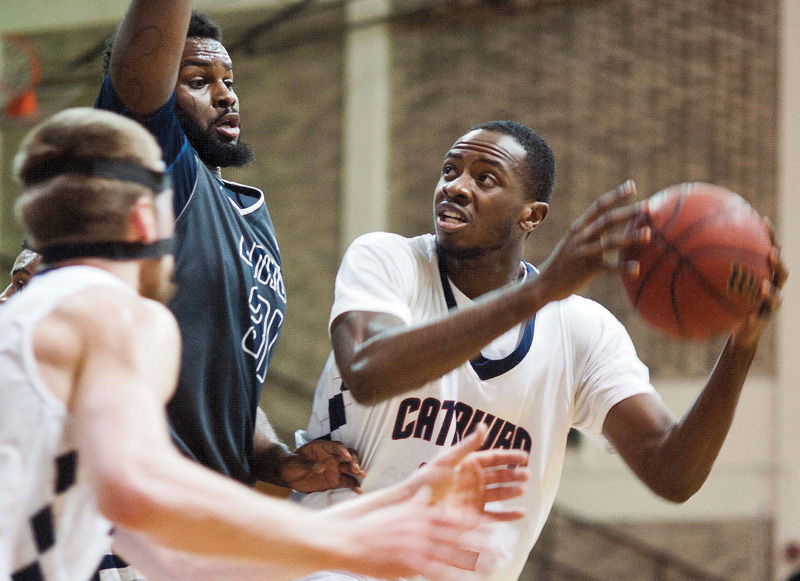 SALISBURY — Major renovations are coming to Catawba’s Goodman Gym on March 8, and Catawba’s men knew it would be the last game they’d play on that floor.

That knowledge provided inspiration as did an appearance by Sam Moir, the Hall of Fame coach for whom Catawba’s court is named. Catawba took the No. 3 team in the nation to the wire but lost 60-57 to SAC champ Lincoln Memorial on Saturday.

“We wanted to win so bad,” Catawba freshman Jameel Taylor said. “This was the floor (assistant coach) Brian Graves played on and this is was the floor where Catawba made a lot of memories. We wanted to end on this floor on a good note. We gave it everything we had.”

Lincoln Memorial (27-1, 21-1) averages 83 points per game, but the Railsplitters shot 34.4 percent and 4-for-20 on 3-pointers. Lincoln Memorial has outstanding guards, but Taylor’s defense kept driver Lorenza Ross out of the lane, and Catawba contested shooter Luquon Choice’s 3-pointers. Choice shot 2-for-10 from long range.

“We talked about three things, and Ross and Choice were two of them,” Catawba coach Rob Perron said. “The third thing was rebounding. We needed three defensive rebounds for every offensive rebound they got, and we didn’t get that done. They had 15 offensive rebounds. That’s where we lost it.”

The Indians slid behind 12-4 early and 23-14 after 12 minutes. But Catawba finished the first half strong, getting within 28-27 on a layup by Taylor.

“We were fortunate not to be down 12 or 14 at halftime because Catawba outworked us and out-executed us in the first half,” Lincoln Memorial coach Josh Schertz said. “In the second half, we did a better job of matching Catawba’s intensity.”

With Catawba down 58-54 and the clock ticking toward the final minute, Taylor took a pass from Morrison and saw an opening.

“I heard coaches yelling to go to the rim, and I drove, got the contact and made the shot,” Taylor said.

His three-point play made it a one-point game, and Goodman Gym got loud.

Gerel Simmons made two clutch free throws for the visitors with 13 seconds left, and Catawba needed a 3-pointer to force overtime. Morrison took the shot to tie with six seconds left, a clean look from the left side, but it didn’t fall.

“We were matadors defensively Wednesday,” Perron said. “We showed immediate defensive improvement. We shot 33.8 percent, but our defense gave us a chance against a really good team. Lincoln Memorial is the best rebounding team in our league and the best shot-selection team in our league.”

Keenan Peterson had 17 points and 16 rebounds for the Railsplitters.

“We had more good luck than bad luck today, and we were fortunate to escape,” Schertz said. “I’m already feeling a little sick about coming down here next season. Catawba has some of the best young players in our conference, and coach Perron has them playing hard.’

Catawba will be the SAC’s No. 6 seed and plays at No. 3 Newberry on Wednesday at 8 p.m.