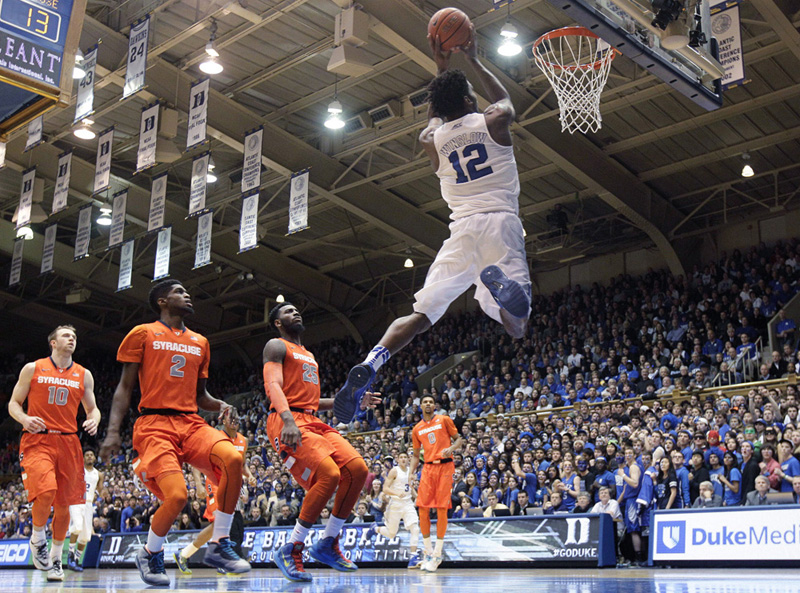 The Associated Press Duke's Justise Winslow (12) drives to the basket as Syracuse's Trevor Cooney (10), B.J. Johnson (2) and Rakeem Christmas (25) watch during the first half Saturday at Cameron Indoor Stadium.

DURHAM, N.C. (AP) — Justise Winslow swished a big 3-pointer for No. 4 Duke, and turned to find something unusual: coach Mike Krzyzewski reaching to give him a high-five.

The freshman scored a season-high 23 points and the Blue Devils routed Syracuse 73-54 on Saturday night for their ninth straight win.

Duke transfer Michael Gbinije — who had 27 points against his old team two weeks ago — finished with 12 on 5-of-20 shooting, with several of those misses close range. The Orange were just 3 of 20 from 3-point range.

“You can miss 3s,” coach Jim Boeheim said, “but you can’t miss layups.”

When the Blue Devils most needed a big shot, Winslow — who Krzyzewski said has been playing with a fractured rib — was there to hit one.

After Matt Jones started the decisive run with a 3, Winslow swished another one about a minute later — in the process earning that rare during-the-play high-five from Coach K.

The lefty then stepped back behind the arc and connected again about 3 minutes after that to make it 51-33.

“I wanted to keep moving because they’d have to keep their eyes on me,” Winslow said. “So I was going from the high post to the corners, just to stay active.”

Okafor capped that decisive run with a free throw — after missing his first six foul shots — that put Duke up by 20 for the first time, 58-38 with 9:42 left.

Winslow, who scored 20 points both against Wake Forest and Clemson, had 15 in the first half of the latest matchup of the two winningest men’s coaches in Division I history.

By the end of the night, Krzyzewski and Boeheim combined for 1,965 victories.

What had been billed as the ACC’s best new rivalry — the teams traded wins last year in a pair of epic games — lost some sizzle when the Orange dropped out of the national rankings, then held themselves out of the upcoming postseason.

And with the outcome of this one decided early in the second half, Boeheim at least got to see the end of a game at Cameron Indoor Stadium.

That didn’t happen last year, after he tore off his sport coat to argue a late block-charge call, received two technical fouls and was tossed in the final seconds of Duke’s 66-60 victory.

Some Cameron Crazies wore sportcoats in the stands — then pretended to rip them off both during Boeheim’s pregame introduction and after officials’ calls they disagreed with. It was a not-so-subtle tweak at the Syracuse coach’s jacket-shedding meltdown last year.

Cook injured his left ankle after hitting a fast-break layup with about 13 minutes left, joining Okafor and Grayson Allen with ankle injuries. Cook returned and played nine more minutes. In addition to Winslow’s previously undescribed injury, Krzyzewski says Okafor — who played 31 minutes — is “not 100 percent” after rolling his ankle in the North Carolina win and had to be retaped following warm-ups.

Syracuse: The two best games of Roberson’s career have come against Duke. He had 19 points in the last meeting. Said Boeheim: “It helps when nobody’s guarding you.”

Duke: Cook missed his first five 3-pointers before connecting with just over 11 minutes left to extend his ACC-best streak of games with a 3-pointer to 39.