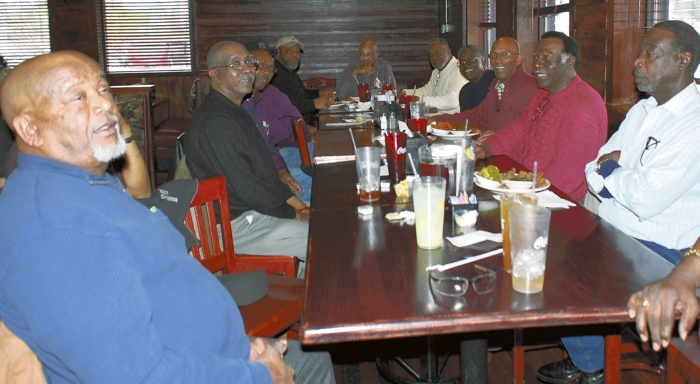 Mark Wineka/Salisbury Post J.J. Foster, left foreground, was a car inspector for 40 years. He meets at least once a month at Thelma's restaurant in Salisbury with other retirees from Norfolk Southern.

SALISBURY — Around the table, the stories about being hired by the railroad held a lot of similarities.

Reggie Heilig in 1971 and Larry Dalton in 1975 went to recruitment meetings being held by Southern Railway Co. at the former J.C. Price High.

Virtually all the guys who showed up were like them — African American. The railroad recruiter didn’t mince any words, Dalton said. His group was told the railroad jobs available would expose them regularly to rain, snow and cold. They would be expected to work nights and weekends and fill in for guys who had more seniority.

“About half the men in the room got up and left,” Dalton said.

At the time, Dalton was a brick mason, a decent paying vocation, but the work was inconsistent and seasonal. Dalton had always heard that railroad jobs were some of the best available, if you could stick them out.

Southern hired him Aug. 8, 1975, and he spent most of his 35 years to come as an engineer on freight trains, usually taking trips from Linwood Yard to Manassas, Va., though he was qualified on the 487 miles between Greenville, S.C., and Alexandria, Va.

Dalton and others around the table said they probably were part of  Southern Railway Co.’s efforts in the 1970s to diversify its workforce, but when they gather every second Wednesday of the month for lunch at Thelma’s restaurant in Salisbury, it’s more about seeing old friends.

“We just wanted to keep in touch with everyone,” Dalton said.

William Smith agreed. He retired as a freight engineer in April 2012 after 34 years with Norfolk Southern. Smith said he had a good job with the railroad, but “what I miss are the guys here.”

The group of retirees don’t have a name for themselves. J.J. Foster, a car inspector for 40 years, laughed and said maybe the name should be “Affirmative Action.”

At first when the men started getting together, they were going to Golden Corrals in Greensboro and Lexington. For now the favorite spot is Thelma’s.

On this particular day. the 15 men having lunch represented more than 375 years of railroad experience.  Among them, there were six engineers and five conductors, but the former jobs also included positions such as senior general foreman, signal maintenance, brakeman and car man.

Foster said he answered two newspaper advertisements for potential jobs with Southern in 1972 — one for a diesel electrician; the other, a freight car repairman.

The diesel electrician’s position required 24 weeks of training in Birmingham Ala., while the car repairman’s job was only eight weeks in Birmingham. Foster said he thought the less time he spent in Alabama in those racially charged days the better, so he signed on for the eight-week course, which eventually led to a 7 a.m.-to-3 p.m. job as a car inspector at Linwood Yards.

Dalton said he loved his job on the road as a freight train engineer. The engineers made the most money and had the highest responsibilities.

“Think about the trains you had,” Dalton said. describing freight trains 1.5 to 2 miles long and and being pulled by two to three engines. “We did what we had to do.”

After being hired in 1975, Dalton learned all the jobs in Spencer Yard and spent two years as a conductor. When he was transferred to the road, he made more money, but the tradeoff was being away from home a lot.

Sometimes, he could be gone six days, home for a seventh and gone for six more.

“That was the hardest thing about working the extra board,” Dalton said.

Smith, also a freight engineer, remembers working more than 20 straight days when Hurricane Hugo washed out tracks in the eastern part of the state. He was making constant runs between here and Selma, Greensboro, Raleigh and Durham. Smith started out as a brakeman.

Reggie Heilig, a freight train conductor, worked  briefly as a young man in a cotton mill. “I didn’t like the textile mill — I knew that,” he said.

A uncle advised him to look into getting a job with the railroad. Although Heilig had grown up near Spencer Shops, he said he had no clue about anything related to the railroad.

“It was like a light bulb went off,” he added..

After finishing a third shift at the cotton mill one day, Heilig went job prospecting at the Spencer Rail Yard, but learned the company wasn’t hiring. A few months later, he ran into a former high school teacher who had heard Southern Railway was sending a guy down from Washington, D.C., to test people for some railroad jobs.

Heilig attended a meeting at the old Price High in 1971. started training that same year and was hired in 1972, launching a 41-year career. Heiling recalled going through a lot of on-the-job training in outlying locations, traveling as far south as Greenville, S.C. The older guys told him to stick with it and soon he was going to a school for conductors, filling in as as conductor, then becoming a conductor full-time.

Heilig stuck almost exclusively with freight trains. The infrequent times he was a conductor on a passenger train, Heilig didn’t like it, describing the work as “too hectic.”

Goodlett was working for Fiber Industries on U.S. 70 when he decided he wanted a change. He put in an application with Southern in 1973, and it took a year before he heard back and was hired.

“In the 70s, it was getting better,” Goodlett said about increasing opportunities for African Americans with Southern.

Over 31 years, Goodlett worked his way up, becoming an Amtrak passenger engineer, qualified from Washington to Atlanta. He retired 10 years ago. He smiled broadly when he said he hasn’t looked back.

“When I walked away, I walked away,” Goodlett said. “The people you work with make the job smoother. Every job has a good day and a bad day. Since I’m retired. I have a lot more better days.”