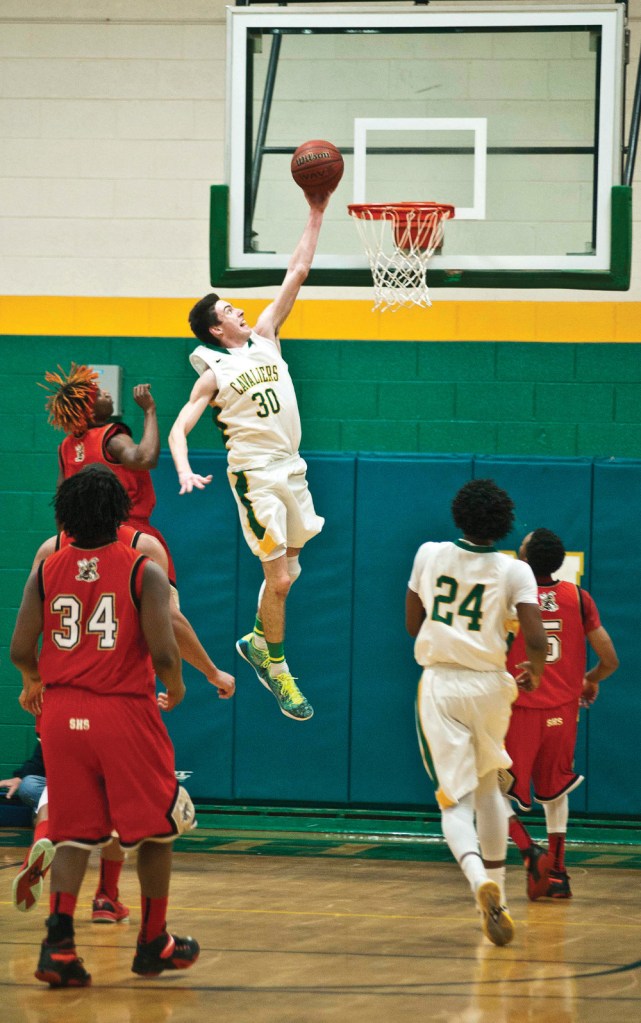 SPENCER — Salisbury coach Jason Causby shook his head after his team lost to North Rowan for the third time this season and the ninth time in a row.

“It’s kind of like two kids going at in the back yard,” Causby said. “One kid keeps getting hit — sooner or later he’s got to start returning the blows.”

The stakes were higher than usual between the neighbors. This was a first-round 2A playoff game, and the Cavaliers, playing without No. 2 scorer Josh Handy, still battered the Hornets 67-52.

The No. 14 Cavaliers got a lights-out game from Henderson Lentz, who rained six 3-pointers and scored 21 points.

“I missed every shot I took in warmups,” Lentz said. “But that’s  usually when you have a good night. That first shot fell for me, and then they all started falling. They had a gap in their zone, and guys were swinging the ball to me.”

North Rowan star Jalen Sanders was held to 14 points, but the Cavaliers got a huge game from Joseph Scott. He was a demon on the boards and scored 18.

“Usually I’m that guy leaking out on the break, but without Josh Handy, the coaches told me what they needed was rebounds,” Scott said. “I put some
rebounding in my game, and it helped us get the win.”

While the efforts of Lentz and Scott were obvious, more subtle were the contributions of  A.J. Shields and Alonzo Sirleaf. They got  the minutes that ordinarily go to Handy. They didn’t score like Handy, but they battled.

“They had a void without Handy,” Causby said. “But those kids they put in there didn’t hurt them.”

North Rowan coach Andrew Mitchell watched his team suffer a discouraging loss to Lexington last Friday that cost the Cavaliers a trophy, a seed and Handy, who broke his wrist. But the Cavaliers rebounded.

“We had individual meetings with each player and let them talk about what they thought their role was,” Mitchell said. “We told them to just relax and play and not feel like they were coming out if they made one mistake.

“Shields is the hardest guy in world on himself, but he relaxed and played very well. I’m very proud of him.”

“He’s a shooter who’s been hesitant to shoot,” Mitchell said. “We told him you miss 100 percent of the shots you don’t take and we told him there was a nice seat on the bench for him if he didn’t want to shoot. He shot the way he can.”

“Salisbury was focused on stopping Jalen because he’s a big part of our team,” Scott said. “But we have others who can step up.”

North Rowan led by 13 by the end of the third quarter. When Lentz buried back-to-back 3s for a 20-point lead early in the fourth quarter, it was all over.

“One of the things we talked about was not letting Lentz beat us,” Causby said. “Give him credit for working hard to get open, but part of it was just bad defense on our part.”