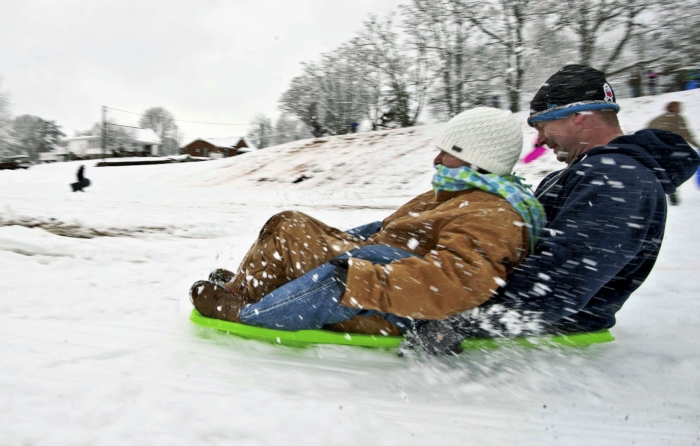 JON C. LAKEY / SALISBURY POST Randy and Melinda Rhinier come down the hill in tandem. The China Grove Police department turned their office into a temporary ski lodge by offering hot chocolate to the the large group of sledders that took advantage of the hill behind the office to sled. Thursday, February 26, 2015, in China Grove, N.C.

SALISBURY — Some people live for snow like this, and John Walters is one of them.

From 9 Wednesday night to well past noon Thursday, Walters sat in the cab of his Ford tractor with a plow attached and pushed away snow and slush at the Rowan County Airport.

The snow was no match for Walters’ tenacity. Dusty Mills also was helping much of the night.

“This is my cup of tea,” said Walters, who is retired but signed on at the airport because he loves to mow, too. “This is like mowing grass. It works out for me.”

By mid morning, the airport’s runway and taxiway were clear. Walters was pushing snow away from the biggest hangars, before moving onto the ramp.

Tom Graham, director of flight operations for Food Lion and a member of the airport advisory board, said that although Rowan County Airport was officially closed to takeoffs and landings Thursday morning, it could open quickly if it had to, thanks to the work Walters and Mills put in.

“This is a big deal,” Graham said, “that the county is so proactive in having the runway clear.”

The weight of the “heavy snow” — some 5 to 8 inches fell in Rowan County — was evident at the airport, Graham pointed to all the small planes tied down near the terminal whose tails had been pushed to the pavement by the weight of the snow.

Thursday morning was like an awakening to a winter wonderland first, then the realization that there was work to do — shoveling drives and sidewalks, plowing streets and parking lots and fixing downed utility lines.

Salisbury Police said they had six calls to request the power companies for trees falling on utility lines or similar incidents from 8 p.m. Wednesday night through 10 a.m. Thursday. There were three minor vehicle accidents, one of which occurred Wednesday night.

Police responded to nine vehicle-related assists for motorists who may have either been stuck in a ditch or who needed to be towed to safety from 8 p.m. Wednesday night through 10 a.m. Thursday.

When asked how many wrecks the N.C. Highway Patrol responded to, officials could not determine a number.

Power was out for around 5,000 Duke Energy customers across Rowan County Thursday morning. The number was down to under 1,000 by mid-afternoon with the company estimating that everyone in the county would have their power restored by Thursday evening.

The eastern part of the county — East Spencer, Spencer, northeast Salisbury out Old Mocksville Road and Long Ferry Road toward High Rock Lake — had the majority of power outages.

“We lit the gas logs to keep warm,” she said.

Power outages were also reported in China Grove, off Highway 152 west of Landis and the areas around Rockwell and Gold Hill.

Salisbury Fire Chief Bob Parnell said snow plows were running through the night Wednesday into Thursday. He said most of the city’s streets, including in residential neighborhoods, were in good shape by Thursday afternoon.

In a subdivision off Old Mocksville Road, a group of kids spent their snow day constructing a snowman that measured more than 4 feet high.

“It took a really long time,” Hurley Elementary student Jalen Britton said. His cousins, Aniya and Raymond Brown, joined in on the fun.

“We used acorns for the mouth, a candle for the nose, and a lot of snow,” Jalen Britton said.

Like John Walters, Lane Barnhardt and Rick Troutman, snow-plow drivers for L.I. Long Construction of Winston-Salem, already had put in a good 12-hour shift or longer by noon Thursday.

Long Construction serves as a contractor for the N.C. Department of Transportation during snow events such as this one, and Barnhardt and Troutman had been plowing Rowan County roads such as U.S. 70, Sherrills Ford Road and Woodleaf Road.

“It’s not really bad at all,” Troutman said about 10 a.m. when he and Barnhardt stopped to refuel at a gas station near the airport. “It’s getting warm enough now.”

Mike Deal knew about the weight of the snow as he shoveled an on-street space for his car on Carolina Avenue in Spencer.

“I’m out here shoveling in the snow that I’m not supposed to be shoveling,” Deal said, noting how his wife was worried about his heavy exertion. Deal said he had an uncle who died many years ago from a heart attack he suffered while shoveling snow.

“I’d just as soon go with a trickle of sweat going down my back,” Deal said of the wintry exercise. He already had walked up to Central United Methodist Church to retrieve Sunday’s church bulletins for folding back at his house.

Many Spencer residents were without power for several hours Thursday morning, but it returned for most by 11 a.m. Mark Crosley was loading a stockpile of wood at his brother-in-law’s house in Spencer, where Betty Rice pointed up to the limb of a maple tree which had snapped away, falling on a utility line.

Though her power was back, she and her husband had no television. When she called her TV provider, she was told “We don’t cut trees or limbs,” an answer which didn’t make Rice happy.

On Seventh Street in Spencer, 3-year-old Anthony Wilkie and his grandmother, Monica Hanson, were putting the finishing touches on a front-yard snowman. They used the lids from spray cans as eyes, tree branches for arms and a plastic handle for a nose.

When they were finished, little Anthony plopped down in the snow of front of their creation and made a snow angel.

Reporters Shavonne Walker and David Purtell along with intern Megan Braun contributed to this story.