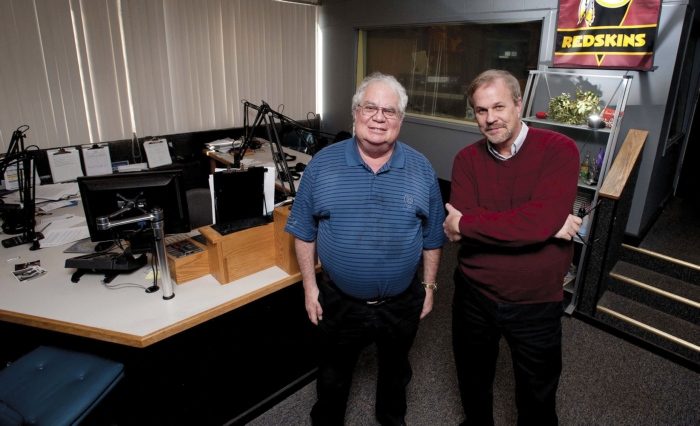 Howard Platt and Kent Bernhardt have been filling the Salisbury airwaves with their morning show at WSTP since ...?

It was a cold, clear and beautiful Wednesday morning outside the WSTP 1490 AM radio station on Statesville Boulevard. Inside, two friends were using the station’s “1,000 watts of screaming power” to inform and entertain listeners across the county.

It’s an understatement to say Howard Platt loves North Carolina basketball — he graduated from UNC Chapel Hill. So when the Heels lose, people call the station to hassle him about it.

Can we stop talking about the game, Howard says.

The problem for Howard is he’s the sports guy for WSTP — has been since 1978. So he has to talk about the game.

Kent can’t help but smile and laugh at his good friend’s agony.

It’s a typical day for the “Kent and Howard in the Morning” show. Howard does the sports, and Kent does news and weather. They fill the space in between with conversation, whether between themselves or with callers.

But this Wednesday morning looks like it’ll be the last one for the show. The station was sold last year to the Catawba College Foundation and the pair’s contracts with the station’s previous owner, Rowan Media Inc., are set to expire no later than Sunday.

Kent joined Howard on the morning show in 1995. He left the station in 2000 to work for the Performance Racing Network at Charlotte Motor Speedway in Concord, but returned to the show in 2008, though his day job is still at Performance Radio Network. JON C. LAKEY / SALISBURY POST Kent Bernhardt laughs during on air conversation with one of the callers.

Back in ’95, a consultant for WSTP overheard Kent and Howard arguing about something in the hallway at the station.

He told them that’s what they need to do on the show. So they did it, and people liked it.

“We picked up a nice following,” Kent said.

A lot of people have tuned into the show over the years, including elected officials, to talk about issues that were hot topics in the community, Kent said, adding they even got calls from local state representatives who were listening online in Raleigh.

Kent told a story about a caller who called to say there was something wrong with Fibrant at his house. The man called back later and said the problem had been fixed — Salisbury Mayor Paul Woodson had been listening to the show and went to the man’s house to help fix the problem.

“Stations can play music all they want to. The music is not that important. What you do between the songs is all important, because that’s what gives you your link to your community,” Kent said about why the show worked.

Kent sits at a U-shaped desk with several radio mics attached to it in a larger room in the center of the station. Howard’s room is to his left, through a window and elevated a couple of feet.

Heavy snow is set to hit the area later in the day and Kent updates listeners on the forecast every 10 minutes during the three-hour show, 6 a.m. to 9 a.m.

“Oops, there goes the weather again,” he says just before a commercial ends, quickly putting on his headphones and adjusting the mic.

When Kent talks on air, he uses hand gestures as if his listeners were in the room with him. His voice is crisp and clear, perfectly styled for the job after decades of experience.

Howard’s style is a little different. The voice is great, but Howard leans forward in his chair, hands on the desk or at his hips, almost touching the mic with his mouth. His knee bounces while he talks.

Howard said he and Kent have a good rapport. Their different opinions and personalities are what made the show work over the years. JON C. LAKEY / SALISBURY POST Howard Platt carries on an on air conversation with his co-host Kent Bernhardt, who is another room.

Kent came to WSTP in 1977 from the other local station, WSAT, which is where he started his radio career after graduating from UNCC.

Originally from Faith — he went to East Rowan High School — he ended up getting a home just minutes away from the WSTP station. He can walk to work if the pending snow storm prevents him from driving.

“I’m kind of news junkie,” he said about why he enjoys his job.

Kent said he was always fascinated by radio growing up.

“When I was kid, it was just magical to me … that so far away somewhere there was a guy sitting in a room with a microphone and somehow still was coming through the radio,” he said.

Howard and Kent remember the days in the 1970s and through the ’80s when the station was buzzing — 30 people would be in the small building back then. But on this morning it’s just Howard, Kent, a reporter and a photographer.

Howard is originally from a small town, Strasburg, in northern Virginia. He grew up a Redskins and Washington Senators fan, and has had Redskins season tickets every year since his dad first bought them when Howard was 12 — he is 63 now.

Howard has had quite a successful career in sports broadcasting. He’s done color commentary for Davidson College and UNCC. And he was named North Carolina’s Sportscaster of the Year in 2004.

He majored in psychology at UNC, but took some broadcasting courses. Sports got him into broadcasting, he said.

“I had to a make a decision, and I made a decision to do what I really enjoyed,” he said.

Though the show is in its final days, Kent and Howard do not seem too dismayed.

Kent said he didn’t plan on doing the show much longer anyway now that his daughter is almost finished with college.

Howard, who is probably best known around the area for his play-by-play of American Legion baseball games, said he’d like to be a mentor to students in the program and help them learn the trade he’s mastered.

Ideally, he wants to continue doing play-by-play broadcasting, he said.

It’s unclear what will happen come Monday morning for WSTP. No one has given Kent or Howard any indication about what the plans are.

“My alarm won’t be set Monday Morning,” Kent said about not having to come into work so early.

Howard and Kent said they’ll miss the show and the banter with each other and the people who called in, but that they will remember the good times fondly.

“Sometimes I would learn things from people, and I hope they learned some from me,” Howard said.