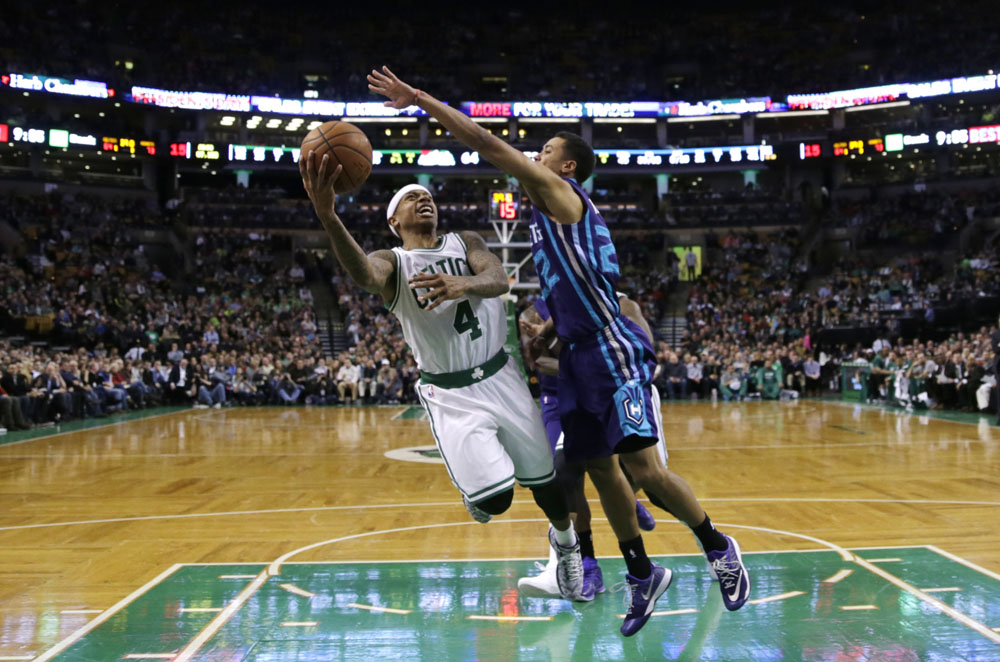 The Associated Press Boston guard Isaiah Thomas (4) drives to the basket during the second half Friday. The Celtics defeated the Hornets 106-98.

BOSTON (AP) — The ever-changing Boston Celtics have found a second unit that comes with a lot of offensive firepower.

Newcomers Isaiah Thomas and Jonas Jerebko and relative newcomer Jae Crowder combined for more than half of the Celtics’ points and led a 16-point comeback in Boston’s 106-98 victory over the Charlotte Hornets on Friday night.

Led by Thomas, who scored 21 of his 28 points in the second half, the Celtics battled back to tie the game at 80 on his 3-pointer and reclaimed the lead for good at 89-88 on Jerebko’s layup at the 5:28 mark.

“Once we hit a few shots, got a little confidence,” Thomas said, “we were in attack mode the last 16-17 minutes of that game where we had the Hornets on their heels.”

In his third game since joining the Celtics in a deadline deal with Detroit, Jerebko had 16 points and 10 rebounds. It was his first double-double since the 2011-12 season.

“When he played for Detroit, I knew he played very hard,” said Avery Bradley, who scored 19 points. “He makes big shots. I feel like he can really help our team out.”

“He’s very, very, very competitive and prideful,” Celtics coach Brad Stevens said of Crowder. “I’ve always thought the toughest of the tough could guard anyone for a possession.”

Boston has carried 27 players on its roster this season.

It was the third straight win for the Celtics, who were outscored 25-1 over stretch of nine-plus minutes that spanned the end of the second quarter and beginning of the third.

“We played great defense (during the stretch) and they turned the ball over,” Jefferson said. “We got away from what we were doing.”

Losers of six of their last seven, the Hornets were again led by Mo Williams, who scored 31 points. In four games since joining the Hornets after a trade with Minnesota on Feb. 10, Williams is averaging 23.5 points per game.

All of the Hornets’ starters scored in double figures, including Michael Kidd-Gilchrist, who had 12 points and 11 rebounds.

Hornets: Bismack Biyombo missed his 11th straight game with a bruised right knee. … Coach Steve Clifford, talking before the game about the challenge Lance Stephenson has had adjusting to Charlotte, said expectations were unrealistic before the season. “His attitude has been fine,” Clifford said. “He hasn’t been kicked out of practice, or any of that.”

Celtics: Center Kelly Olynyk, who has missed the last 16 games with a sprained right ankle, will return to practice Saturday. He has not been ruled out of Sunday’s game. … Smart scored in double figures seven times in February. He had done so eight times previously this season.

Bradley credited Thomas with being the spark, but the confident newcomer deflected the praise. “”That’s pretty nice, but it’s not me. It’s this team, we’re playing hard, coach is putting us in position to be successful and that’s the key,” he said. “We are believing in each other.”