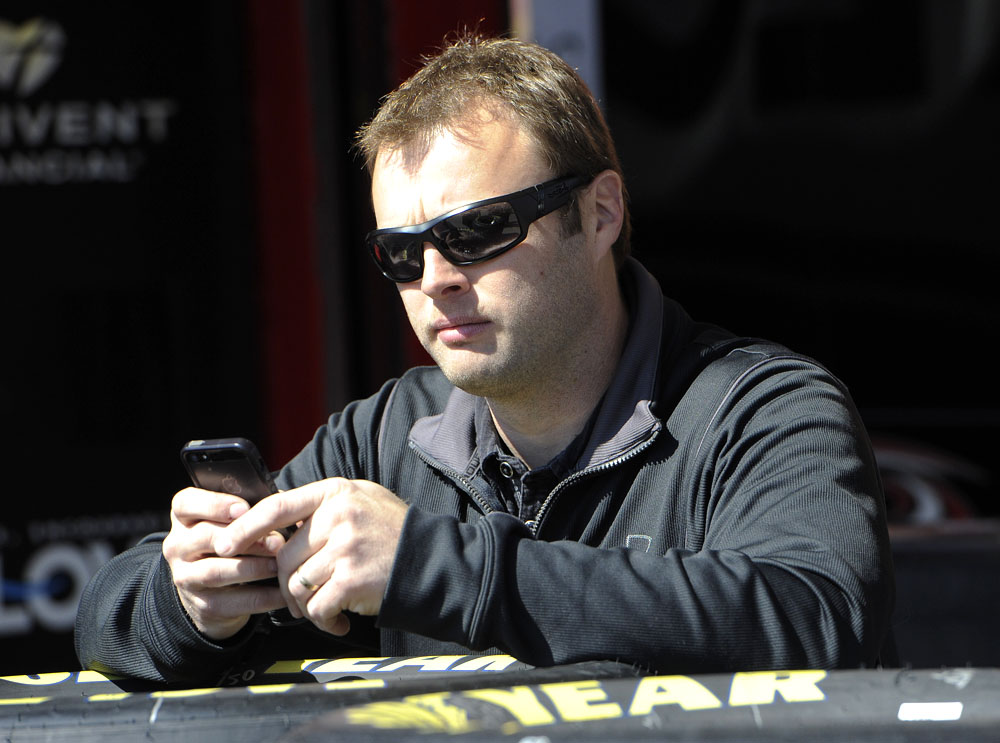 The Associated Press Travis Kvapil uses a cell phone Friday in the garage at Atlanta Motor Speedway in Hampton, Ga. Kvapil's Sprint Cup car, owned by Team XTreme Racing, was stolen early Friday, forcing him to withdraw from a race this weekend.

The No. 44 car from small-budget Team XTREME was still missing as the other teams took the track for practice, though no one was quite sure what the thieves could do with the $250,000 Chevrolet race car.

The team didn’t have a backup car in Atlanta, so it was forced to drop out when the stolen machine couldn’t be located in time for NASCAR’s mandatory inspection. Qualifying was scheduled for late Friday afternoon.

“I’ve never heard of anything like this. It’s really bizarre,” Kvapil said. “You can handle maybe getting a flat tire, or getting caught up in a wreck, or a blown engine, something that actually happens on the race track. Or you don’t qualify, because you don’t have enough speed. But to not even get a chance … that’s pretty disheartening.”

It was an especially tough blow for Team XTREME, which doesn’t have the funding of major multi-car operations such as Hendrick Motorsports and Joe Gibbs Racing. Despite a wreck in qualifying, the team managed to make the field for the season-opening Daytona 500 with Reed Sorenson behind the wheel. He finished 32nd in the race.

Sorenson switched to a different team for the Atlanta race, prompting Team XTREME to hire Kvapil, a one-time Sprint Cup regular who made only five starts in the top NASCAR series last season and was looking to make his first appearance of 2015.

“I was excited to be part of a small team and trying to build up with them,” Kvapil said. “Personally, it’s a big setback.”

A trailer with the red race car inside was hitched to a black 2004 Ford F-350 pickup truck parked outside a hotel in Morrow, Georgia, about 15 miles south of Atlanta and a short drive from the speedway, police said. Surveillance video showed the truck and trailer being driven out of the parking lot around 5:30 a.m., Morrow police Detective Sgt. Larry Oglesby said.

The team was scheduled to leave for the track at 5:45 a.m., and a crewman had been outside a few minutes before the theft, smoking a cigarette.

Crew chief Peter Sospenzo couldn’t believe it when someone told him the truck and trailer were missing.

“I thought the guys were kidding around with me,” he said.

The trailer is plain white with no markings. The person who stole it likely didn’t realize the race car was inside, and may have thought it was lawn equipment or something else he could easily sell, Oglesby said.

“Hopefully they’ll open this one up and say, ‘Oh no, this isn’t what we thought,’ and will drop it off at the nearest vacant lot or apartment complex or somewhere,” Oglesby said.

In addition to the race car, the trailer also contained a spare engine valued at $100,000 and racing equipment valued at $17,500, according to a police report.

Kvapil doubts the thieves will be able to cash in on their surprising haul.

“I’m sure they had no idea the contents of that trailer,” he said. “There’s really no use for it out in the general public. I don’t really know what you can do with it. I hope they realize that and will leave it somewhere where the police can find it.”