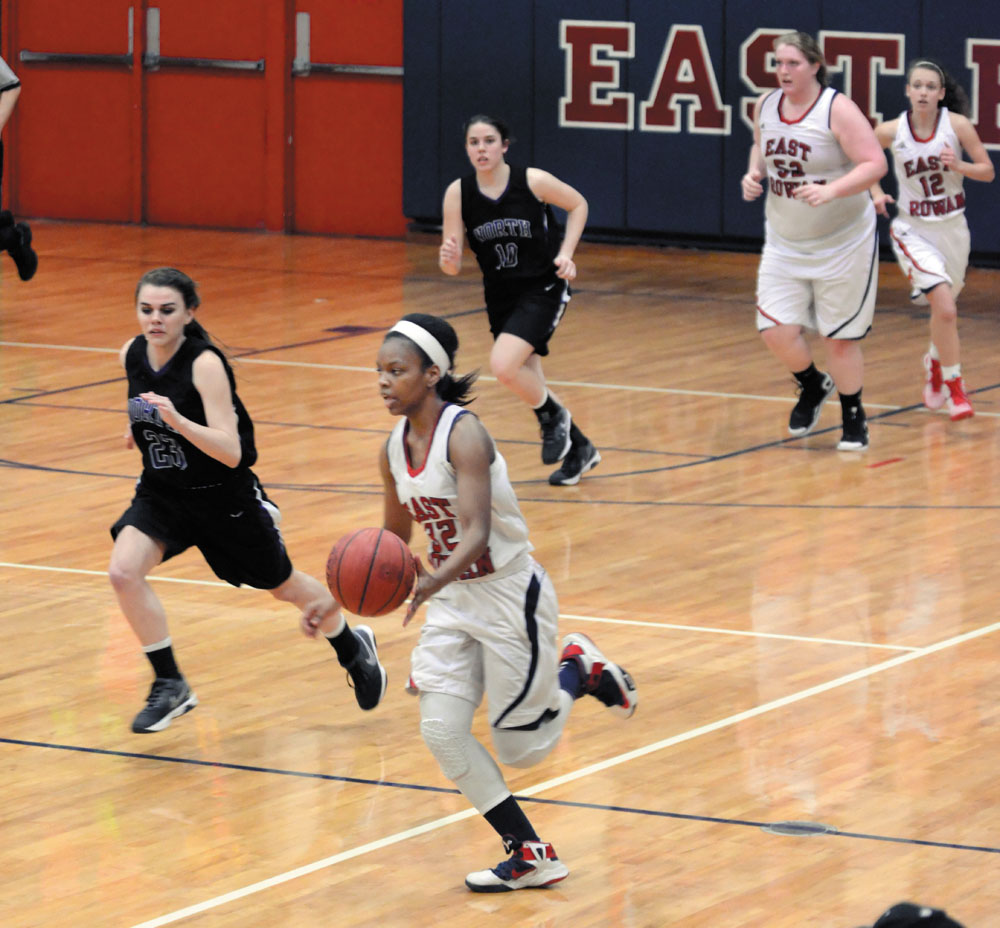 GRANITE QUARRY — East Rowan nearly self-destructed at the end of regulation Friday, but junior guard Shenique Pharr made sure the Mustangs survived in overtime and advanced to the second round of the 3A state girls basketball playoffs.

The Mustangs blanked North Henderson 8-0 in the extra period, with Pharr scoring seven herself, to hold off the Knights 63-55. It was the first playoff win since 2008 for East Rowan (21-3), which travels Saturday to face No. 5 Canton Pisgah (24-1). The second-round game tips off at 4 p.m.

The Mustangs led the Knights by 12 at the start of the fourth period and still had a 53-43 margin with 1 minute, 32 seconds left. Then things went haywire for the Mustangs.

Center Kelli Fisher (12 points, 10 rebounds) fouled out at that point then East Rowan proceeded to miss 8-of-10 free throws in the remaining minute. North Henderson (17-9) made them pay for every miss by nailing two 3-pointers and hitting 6-of-8 free throws as well.

The critical shot was a long 3-pointer from the right side by the Knights’ Ellie Caldwell with just under 15 seconds left in regulation to tie the score at 55-55. East had two point blank chances to win it in the final five seconds but could not convert, sending the game into overtime.

In the extra period it was all Mustangs and Pharr as they played shutdown defense, got solid rebounding from Shelby Benge and Kaleigh Troutman, and unleashed their fast break attack. Pharr, who posted a goose egg in the first half, scored a team-high 19 for the game.

Her three-point play with left 1:38 in the extra period was the dagger as it gave East Rowan a 59-55 lead and momentum. Her fast-break layup and short jumper in the final minute were icing on the cake.

“In overtime I just felt like I needed to step up and do some things for my team,” Pharr said. “We started off flat as a team but finally got it going. It is very exciting to win and we just want to keep on advancing.”

After a tight first half, East Rowan took control with their transition game producing a 15-0 third-quarter run and a 42-30 margin. Pharr scored eight in the surge.

“Our goal was to get the quick outlet and run the floor and we were able to do that for the most part,” East Rowan head coach Danielle Porter said. “It seemed like after this long break (15 days for each team due to icy weather), we had trouble at times getting back into that rhythm including our foul shots.

“Hopefully now we can move forward, learn from our mistakes and keep advancing.”

Pharr and Fisher were the only Mustangs in double figures while Troutman added nine points and nine rebounds. Point Guard Jocelyn Lowe had a career-high 12 rebounds to go with her five points.

Jonnie Petree led the Knights with 20 points followed by Hannah Bracket with 14 and Caroline Marsh with 13.

“Our players never quit,” North Henderson coach Sue Moon said,” You can never count them out but we had a lot of youth on the court at the end, and I think that showed.”