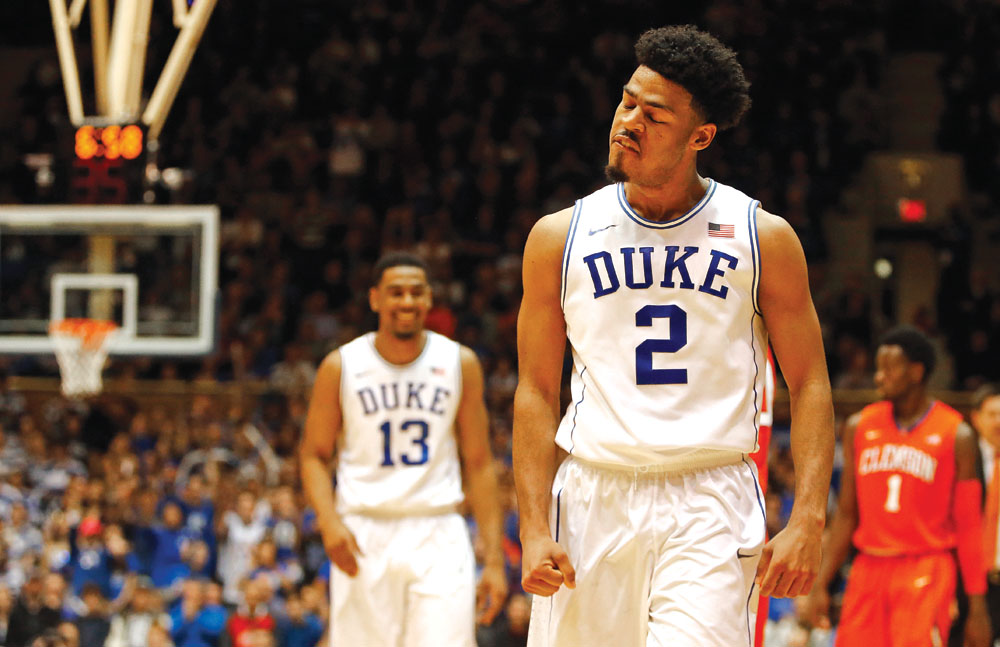 The Associated Press Duke's Quinn Cook (2) celebrates Feb. 21 during the second half against Clemson. Cook has had a hot hand lately with three straight 20-point games.

DURHAM, N.C. (AP) — As hot as Quinn Cook has been shooting lately, No. 4 Duke can’t afford to not have him on the court.

The short-handed Blue Devils have been leaning hard on their lone scholarship senior lately. Cook has three straight 20-point games while playing all but one minute of the last five games for Duke (25-3, 12-3 Atlantic Coast Conference).

It’s no wonder teammate Matt Jones described Cook on Friday as “the rock of the team.”

There are fewer Blue Devils than when the season started. Semi Ojeleye’s transfer and Rasheed Sulaimon’s dismissal have left Duke with just eight scholarship players.

They’ve needed more production from everyone — and Cook, in particular, has been providing it for them.

He has played 209 of a possible 210 minutes during the past five games, and in that span he has scored 20 points four times. That includes a career-high-tying 27 points last week against Clemson and 26-point outings at Florida State and Virginia Tech.

In those five games, he’s averaging 23.6 points, 3.4 rebounds while shooting nearly 54 percent from the field and 49 percent from 3-point range.

And on a team headlined by its freshmen — including 6-foot-11 preseason All-American Jahlil Okafor, swingman Justise Winslow and guard Tyus Jones — it’s Cook who has been carrying the team lately.

“I just think our continuity on the floor, our chemistry has been great,” Cook said. “Myself and Tyus work together in transition. Obviously, Jah gets all the attention, so just playing off him, guys shooting the ball with confidence — it’s just a team effort.

“We’re playing with no regrets right now,” he added.

Cook’s teammates are impressed with the way he’s grown up right before their eyes. At times last season, Cook showed visible signs of frustration and unhappiness on the bench.

“It’s like night and day,” Matt Jones said. “Last year, Quinn had his little immaturity moments, but this year, Quinn’s been magnificent.”

That maturation bled over into his offseason conditioning program — and the results have been obvious. He played all 45 minutes of Duke’s two overtime games in the past 1½ weeks and has three other 40-minute games.

In the eight games that followed Sulaimon’s dismissal Jan. 29, Cook has been on the bench for a combined 12 minutes. His only breather in the past five games was for the final minute of a 78-56 rout of Clemson.

Yet he says he’s “rarely sore” after games.

“Just working out in the summers and the preseason, just really taking it seriously as I got older … and in better shape, I felt I was playing better because I never got tired,” Cook said. “It’s not taking plays off on defense and always being ready, and you’ve got to be in shape to do that. … I don’t really get tired, so it’s been a good thing for me.”