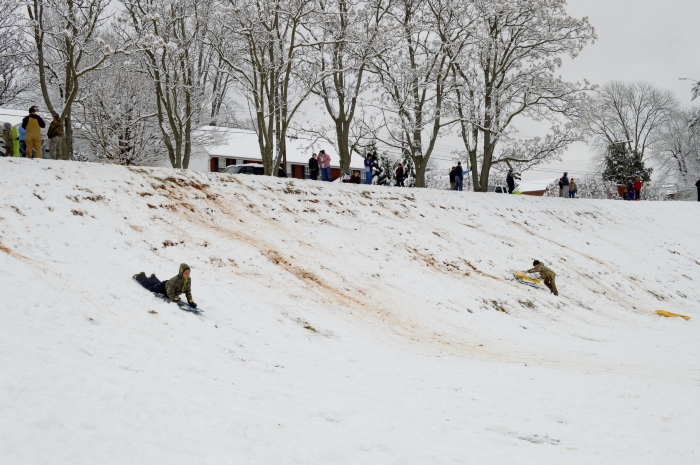 Josh Bergeron / Salisbury Post - Sledders line a hill near the China Grove Police Station. The police department closed down a stretch of road for sledding in advance of the winter weather.

On Wednesday night, The China Grove Police department announced via Facebook that a section of Franklin Street would be closed for sledding. The post quickly went viral, drawing thousands of likes, comments and shares. The police department also announced it would offer free hot chocolate inside the station. When the sun peeked above the horizon and daylight came, roads hadn’t frozen and sledders instead gathered on a hill adjacent to the police station.

The area has always been a hot spot for sledding, said Lt. Andrew Deal, with the China Grove Police Department.

“Back in the day, we didn’t have to close the roads because there weren’t that many people driving,” Deal said. “People used to use car hoods as sleds. This has been a tradition since way back before my parents were kids.”

With snow still falling and daylight just breaking, some sledders had already gathered on top of the hill adjacent to the police station. By mid morning, dozens of sledders covered the area.

“It’s been fun for the kids and to see the community come out,” he said. “For lack of a better word, it just kind of snowballed on social media.”

One of the sledders was Brandon Barrett, a student at China Grove Middle School. Clad in a skeleton sweatshirt and ski mask, Barrett hopped over bumps in the hill, catching air before he landed on the powdery snow. Like others, Barrett wasn’t immune from a few wipeouts, but quickly jumped back up in an attempt to catch another ride down the hill.

Barrett’s sledding tips were to simply have a bit of courage.

“You’ve got to keep your balance heading down,” he said. “You don’t want to get wibbly wobbly.”

When he wiped out, Barrett joked that he may have mustered a little too much courage.

The sledders came from around the region — from Rowan municipalities and other counties.  Stanly County resident Jennifer Efird and her family were at the hill around mid-morning. Efird said the roads near her house weren’t suitable for sledding. Even though the China Grove roads weren’t in top-notch sledding shape, Efird’s son William, like others, took to the hill and zoomed down, catching a few bumps along the way.