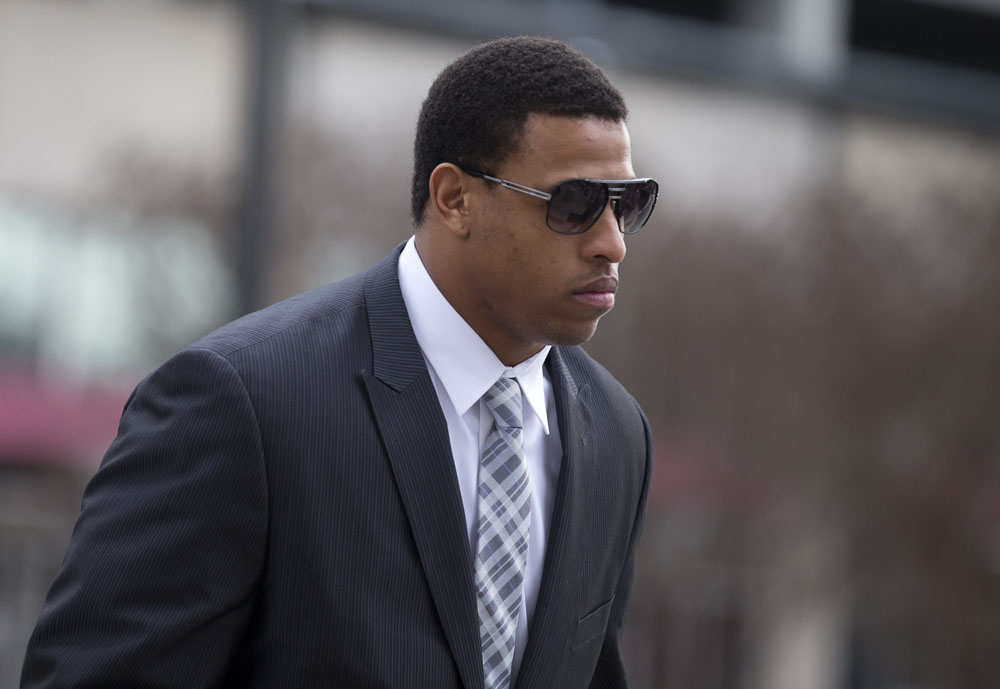 The Associated Press Greg Hardy, shown arriving at the Mecklenburg County Courthouse Feb. 9, is seeking immediate reinstatement from the NFL after a federal judge cleared way for Adrian PetersonÕs return to the league. HardyÕs agent Drew Rosenhaus said Thursday, Òwe are working very closely with the NFLPA on this processÓ and hopes his client will be reinstated soon.

Hardy’s agent Drew Rosenhaus said Thursday, “We are working very closely with the NFLPA on this process.”

Like Peterson, Hardy spent the majority of last season on the commissioner’s exempt list preventing him from playing.

Hardy, 26, was convicted last summer on two counts of domestic violence. He appealed and had both charges dismissed Feb. 9 when his accuser couldn’t be located to testify.

A federal judge opened the door for faster reinstatement of Peterson when he ruled an NFL arbitrator “failed to meet his duty” in a child abuse case against the star running back. U.S. District Judge David Doty overruled NFL arbitrator Harold Henderson’s December denial of Peterson’s appeal.

Doty said the league can’t retroactively apply the standards of its new personal conduct policy to an action by Peterson that happened before the policy was in place.

NFL spokesman Brian McCarthy said in an email the ruling on Peterson is “irrelevant” to Hardy’s case.

Hardy “hasn’t been disciplined,” McCarthy said. “There is nothing for him to seek reinstatement from at this point. His case remains under review.”

The NFL filed a petition in North Carolina court on Feb. 13 to have the protective order lifted from Hardy’s original trial last July in which he was convicted on the two counts of domestic violence. McCarthy said at the time the league is asking the courts to allow them to inspect and copy all material from the original bench trial.

Doty’s ruling Thursday could be good news for Hardy.

Hardy tied a Carolina franchise record with 15 sacks in 2013 and was named to his first Pro Bowl.

In Hardy’s appeal case, Mecklenburg County district attorney Andrew Murray said that law enforcement had taken “extraordinary” measures to find the woman so that she could testify during the appeal. He said they took surveillance of her new address, attempted to find her at work and tried to contact relatives but couldn’t locate her.

Prosecutors spoke to the woman in October and November and that “during those conversations the victim expressed that she did not want to participate in another trial.”

The Associated Press generally does not name victims of abuse.

The woman testified on July 15 that she was scared of Hardy and worried about her safety if she went to police.

She also testified that Hardy threw her in the bathroom and later onto a futon filled with guns. She said he placed his hands on her throat and threatened to kill her.

In his testimony, Hardy refuted that accusation.

He testified that he never hit nor threw the accuser, and didn’t threaten her. Hardy said the woman became angry when he wouldn’t have sex with her and he left the room to sleep in the living room.