5-8 inches of snow in Rowan this morning 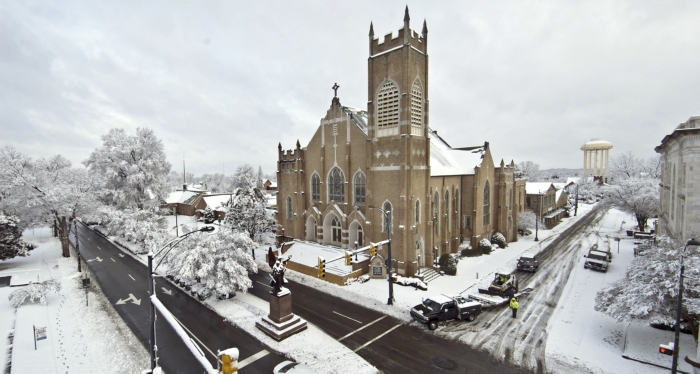 5 p.m.: Power has been restored to many in the area, while new areas are reporting outages. The large swath of outages  along Old Mockville Road, down East Ridge Road and into Spencer has been reduced.
There is a winter weather advisory for black ice is in effect overnight.
Power is still out for about 1,700 people in Rowan County, but Duke Energy is making progress since this morning’s 7,700 outages.

The latest from Ready Rowan is that the winter weather advisory expired at noon, and temperatures slightly above freezing have allowed some snow on trees and power lines to melt.

Local Department of Transportation and municipal street crews have been clearing primary roads and some secondary roads.

Numerous trees fell overnight, leading to street closings and those power outages. Crews are working on a number sites to clear roads.

A hazardous weather outlook tonight is for possible black ice forming as temperatures dip below freezing.

Union Power Cooperative reports it is experiencing an outage affecting approximately 2,500 members in Stanly and Rowan counties. The outage is due to a Duke outage feeding two of Union Power’s substations. Duke Energy techs are working to resolve the issue, and the cooperative will keep members updated as new information is available.

As of 10:30 a.m., Duke Energy is reporting 3,326 without power. A large area around Spencer and northwest Rowan remains without power.

Rowan County had between 5 and 8 inches of snow overnight, leaving trees and power lines heavily laden with the wet, dense snow. The good news is, the Brunswick stew at Andrew Jackson Masonic Lodge on North Fulton Street is still on, 11 a.m.-2 p.m., and 3-7 p.m.

Most of Spencer and portions of East Ridge Road are without power this morning and there are reports of tree limbs on power lines around Second Street. The outage triggered the fire alarm at the Food Lion in Spencer; nothing was found. Areas along Old Mocksville Road and as far as High Rock Lake are without power. There is a report of a tree across Old Beatty Ford Road near U.S. 52. Few accidents are being reported because few people are out.

The city and state have been busy plowing main roads, including Innes and Main Streets. On Wednesday, the state laid down a heavy layer of brine, but with so much snow on top, streets still needed scraping.

The temperature is right at the freezing mark and there’s no further precipitation.  It will be mostly cloudy with a high of 36 today, but tonight’s low will be in the mid-20s, so anything that has thawed will refreeze. Friday’s high will be around 39 degrees.

RowanReady advises that snowpack on roadways will lead to continued hazardous driving conditions through the morning, especially on untreated roads. The winter storm warning has expired, but we are under a winter weather advisory due to the treacherous road conditions.