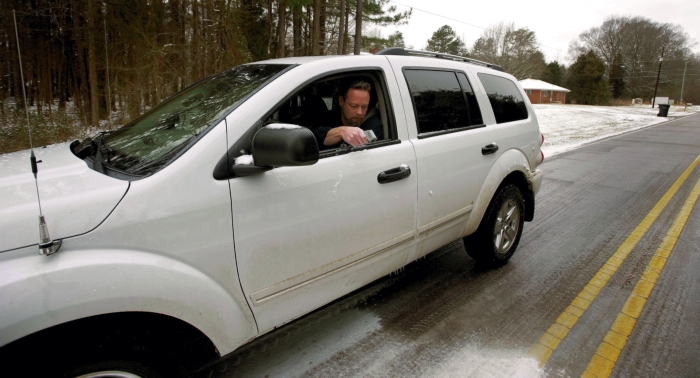 JON C. LAKEY / SALISBURY POST Rowan-Salisbury Schools Director of Transportation Tim Beck uses a handheld laser temperature gun to check the surface temp of the road surface near a traditional trouble spot on on the bus route in southeastern Rowan County. Beck is one of the several school employees that scours the roads when the inclement weather strikes to determine if schools should cancel classes.

Deciding whether or not students go to school during inclement weather is a difficult job, but somebody has to do it.

In the Rowan-Salisbury School System, it’s Superintendent Dr. Lynn Moody that makes the final call, but she couldn’t do it without the help of Director of Transportation Tim Beck and his team in the district’s transportation department.

According to Beck, roughly half of Rowan-Salisbury’s 20,000 students ride the bus, but safety concerns during winter weather go beyond the big yellow buses.

“We’re not just interested in looking at the 10,000 students that ride buses, we’re looking at the 20,000 who have to get to school,” he said Tuesday afternoon during a mid-morning road condition check.

Although classes were canceled for students Tuesday, teachers were given the choice of taking an optional workday. With teachers at work, Beck spent the day continuously monitoring road and weather conditions to ensure the teachers’ safety as they worked.

As he left the district’s bus garage on Heilig Road to check on some trouble spots his mechanics talked about, Beck explained how snow day decisions are made.

When winter weather strikes, he and his team hit the roads to see what conditions are like in different parts of the county.

There are eight mechanics that work for the school system, and they’re broken into two shifts of four. The four mechanics on duty split up and each take a region – north, south, east or west – of the county, checking the curves, hills, bridges, shaded and low lying areas and any other troublesome spots.

“It is a huge county,” Beck said, adding that the district’s bus routes cover “pretty much every road out there.”

“We check secondary roads that typically aren’t going to be treated,” he said.

With a county the size of Rowan, road and weather conditions can vary drastically from one side to another, Beck added as he headed south of Salisbury toward Glover Road. Although it had stopped snowing earlier and temperatures were rising, there was still a considerable amount of slush on the roads.

Glover Road, still completely covered in snow, was in worse condition than most other roads.

“It’s 33 degrees now,” Beck said as he measured the road temperature with a digital laser thermometer.

He explained that the school system’s goal is to make a decision the night before, but with the unpredictable nature of weather, that’s not always a possibility.

“It’s really tough to make a decision that early in the morning,” Beck said.

“Between 3:30 and 4, we’re out on the roads,” he said, adding that he, along with each of the mechanics and the department supervisor spend 20-30 minutes driving the roads, getting road and bridge temperatures, communicating via radio and sending in pictures of road conditions.

Beck makes it to his office on Heilig Road by 4 a.m., where he begins a dialogue with the Department of Transportation, Rowan County Emergency Services and other school systems nearby.

“It’s pretty hectic in the mornings,” he said.

“We’re in constant contact with other counties,” Beck said. “It’s a great network that we have.”

Because the district’s schools have tiered start times to accommodate shared buses, the Rowan-Salisbury School System has one of the earliest start times in the region. Early College, Exceptional Children and choice school students from across the county also require an earlier start.

That gives bus drivers who typically start their routes 5-5:15 a.m. enough notice so they don’t leave home in unsafe conditions.

“We try to let them know as early as we can,” Beck said.

He said the past few days have been easy to call, but sometimes precipitation doesn’t begin until after their cutoff, making it harder to make the best call.

“We always err on the side of safety,” he said.