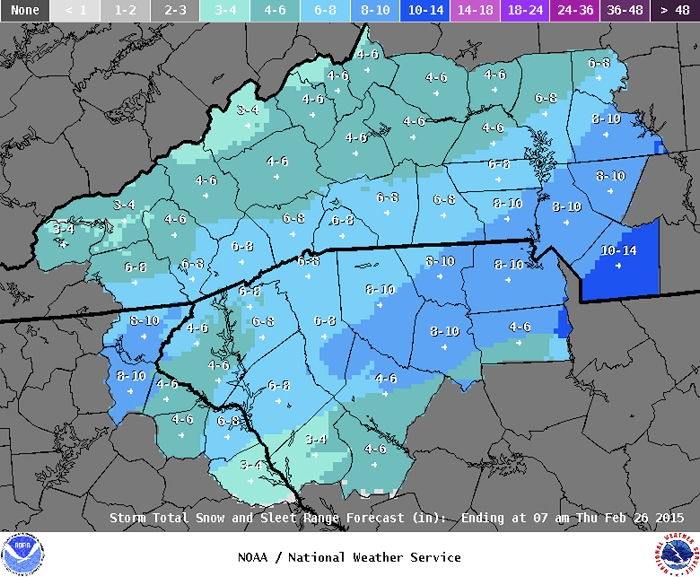 4:45 p.m. THE WINTER STORM WARNING REMAINS SCHEDULED TO BECOME EFFECTIVE AT 4 PM THIS AFTERNOON AND EXTENDING TO 7 AM THURSDAY MORNING.

* HAZARDS…RAPIDLY ACCUMULATING SNOW ON HIGHWAYS THIS EVENING INTO EARLYTHURSDAY THAT WILL CAUSE VERY HAZARDOUS TRAVEL CONDITIONS. HEAVY SNOW WILL RESTRICT VISIBILITIES TO LESS THAN A HALF A MILE AT TIMES.

* TIMING…PRECIPITATION BEGINNING AS RAIN WILL ARRIVE AROUND 6PM QUICKLY TRANSITION TO SNOW.

* IMPACTS…VERY HAZARDOUS TRAVEL CONDITIONS DUE TO SNOW ON HIGHWAYS.

* TEMPERATURES…FALLING INTO THE LOWER 30S.

2:30 p.m. update: Nothing much has changed in the forecast, except more sources are saying we could have 5-7 inches of snow.

Gov. Pat McCrory has already declared a state of emergency for the state ahead of the impending winter storm. By doing so, he can mobilize additional resources and will be eligible to seek federal funds to help with storm costs.

The temperature is 39 degrees now, with an expected high of 43. Much of the lingering snow has disappeared.

Rain and snow are likely before 8 p.m., before changing over to snow, which could be heavy at times. The low will be 311, with winds coming from the northeast at 5-9 mph after midnight. The chance of precipitation is 100 percent. The snow could e heavy at times.

Snow is likely on Thursday before 3 p.m., then a slight chance of rain and snow showers. The high will be 37. Thursday’s low will be 24.

Friday looks like the best day of those ahead, with a high of 40 and a low of 21. The high Saturday will also be 40, but a 30 percent chance of snow moves in Saturday night, with a low of 27 degrees.

It would be nice if someone could make up his or her mind about how much snow we may get Wednesday night into Thursday.

Predictions have ranged from as little as 1 inch to as many as 8 inches. We are under a winter storm warning from 4 p.m. today to 7 a.m. Thursday, with a 100 percent chance of precipitation.

A warning means a winter storm will affect our area today and into tomorrow. The low is coming up from the Gulf of Mexico, the cold air is coming down from the north. We may start out with a cold rain, but it will eventually switch over to snow.

Meanwhile, we have a winter weather advisory until noon today due to the possibility of black ice.

Today is starting off cold, at 24 degrees, but should warm up, as clouds increase, to 42 degrees.

Then rain and snow are likely before 10 p.m., then snow. Patchy fog may come with the snow. The low will be 21. the latest guess on accumulation is around 4 inches. Tonight’s low will be 31.

Thursday has a 40 percent chance of snow before 4 p.m., then a slight chance of rain and snow showers. The high will be 37 degrees. Less than an inch of additional accumulation is expected. The low will dip to 24 degrees.

Friday looks like we might see some sun and warmer temperatures, up to 40 degrees, but the low will drop down to 20 degrees Friday night.

Saturday will e similar to Friday for the day, with partly sunny skies and a high near 40, but, believe it or not, here comes another 30 percent chance of snow for Saturday night. The low will be around 27 degrees.

Sunday, we have a 40 percent chance of rain and snow, with a high of 43. It looks like mostly rain Sunday night, with a low of 35.

Monday brings a 50 percent chance of rain, with a warm high near 58. Monday night, expect more rain and a low around 40.

For Tuesday, there’s a 60 percent chance of rain with a high near 57.