Pernelle Shaw: ‘You can’t ask for much more’ 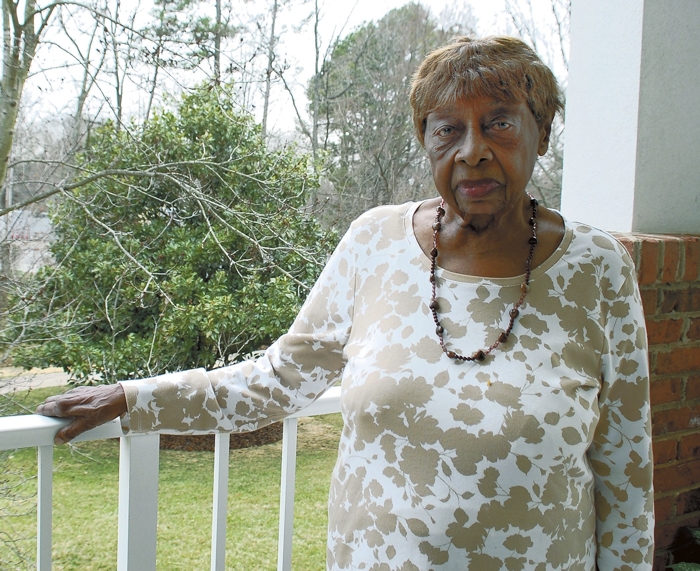 SALISBURY — It was 1950, and 30-year-old Pernelle Taggart was giving up everything for a new adventure in Chicago.

She was resigning from Community Hospital in Wilmington during a time when she was the only certified “Negro” nurse anesthetist in the state. Pernelle had three sisters and a friend in Chicago, and she was hoping economic opportunities for her might be even better there.

Pernelle was doing everything she could to support her father and stepmother back in Salisbury, She already had applied to Chicago’s Ravenwood Hospital, which had advertised for a nurse anesthetist. The hospital sent the application forms and, in turn, Pernelle filled out the paperwork and sent a photograph of herself back with all the necessary documents.

“Throughout our correspondence, everything seemed to go well,” Pernelle says.

It looked as though the job at Ravenwood was hers.

Meanwhile, she had her going-away parties in Wilmington and decided to stop in Salisbury for a few days before leaving for Chicago. A special-delivery letter from Ravenwood Hospital came to her while she was at her parents’ home in Fairview Heights.

Her photograph was enclosed, along with the message that her application had been denied.

Ravenwood said it was hospital policy not to employ Negroes as nurses.

“I felt trapped and up a dead-end road,” Pernelle Taggart Shaw says today.

Pernelle went to Chicago nonetheless and, through faith and hard work, she forged a 30-year nursing career at Cook County Hospital, holding down positions from staff nurse to assistant director of surgical nursing by the time she retired in 1980.

In her apartment at Trinity Oaks in Salisbury, she points to her biggest scrapbook on a stool, and she advises a visitor to use two hands to pick it up, because it’s that heavy.

The scrapbook is filled with personal and family histories Pernelle has written. It includes all of her nursing certifications, high school and college diplomas, photographs of family members, church bulletins, report cards, acceptance letters, promotion acknowledgments, birthday and anniversary cards, medical journals in which her name or picture was included and even a document penned by her grandfather Washington Taggart, who had been born into slavery in 1857.

“I’m not trying to brainwash you,” Shaw says. “This is just information at a glance.”

The scrapbook creates a memoir and, in particular, the story of growing up as an African-American in the segregated South, yet finding a way through education and perseverance to become one of the stars in her family.

Did Pernelle Shaw keep that rejection letter from Ravenwood Hospital?

After almost 58 years in Chicago and after the death of her husband, Harold, in 2008, Shaw moved back to Salisbury that summer. Now 95, she attends First Calvary Baptist Church and still thinks back to all the times during her life she actually wanted to be a missionary.

Instead she chose nursing and has no regrets.

“I believe God is pleased when you’re serving mankind,” Shaw says. “It was rewarding. You can’t ask for much more.”

Pernelle can’t believe she has now been retired from Cook County Hospital longer than her career there. She has a nursing friend named Stella in Rockford, Ill., who is 107. The last time they talked with each other in 2014, Stella remarked, “I wonder what they’re saying about us at the Pension Board.”

“And I said it must have been, ‘Those old bags are still living,'” Shaw recalls.

Both born into slavery, Washington and Martha Taggart lived in rural South Carolina near the town of Ninety-Six. The couple had two sons, Reese Conrad and Moses. Through most of his life, Reese was known as “R.C.”

The Taggart family moved to Abbeville County, S.C., in the 1880s, when Washington Taggart bought 128 acres of farmland. The Taggarts, living in two three-room shanties, raised various crops and also sold some of their land’s timber.

The family became members of Dunn Creek Baptist Church in Ware Shoals, and several of the Taggarts, including Washington and Martha, are buried in the church cemetery.

R.C. Taggart — Pernelle’s father — was born in either 1868 or 1871. He lived on the family farm until he was 26. R.C. tried to improve his education by attending Brewer Normal Institute in Greenwood, where tuition, according to Pernelle’s scrapbook, was 75 cents a month.

He later attended Claflin University State Agricultural College and Mechanical Institute in Orangeburg and Howard University Normal Department in Washington, D.C. in 1891. R.C. and a friend, Ruben McDowell, walked from Abbeville to Washington to attend Howard.

“At times their pant legs would be frozen stiff from the cold, frosty weather,” Pernelle says. “The railroad track served as a map to give them directions to and from home.”

R.C. returned to South Carolina and became a teacher and principal at Shady Grove Rosenwald’s three-room school. He also taught adults how to read and write at night. The pay was never good, if he was paid at all.

In her scrapbook, Pernelle has a 1913 slip of paper showing her father had deposited 8 cents in his savings account at a Ware Shoals bank.

Pernelle was one of eight children — seven girls and a boy — that R.C. had with his second wife, Tiney Stewart. Tiney died in 1923, when their children ranged in age from 14 to six weeks old. Pernelle was only 3.

For the next 10 years, R.C. raised the children on his own, with some help from Pernelle’s maternal grandmother, Anna Stewart.

About 1933 or 1934, R.C. Taggart married for a third time, and Emma Clinkscales became stepmother to Pernelle and eight other of Reese’s children.

The “colored” school Pernelle attended only went through seven grades. She and her sister Tiney then started walking 13 miles one way to Honea Patch, S.C., to attend the nearest black school with an eighth grade.

At times, R.C. Taggart would take the girls or pick them up in his horse and buggy. Other times, they would stay a whole week with Eugenia, a daughter of Emma Taggart, who Pernelle says was an extraordinary woman with a loving heart.

R.C. and Emma soon considered moving to Salisbury, where one of R.C.’s daughters, Ophelia, and her husband, Leo were living. Leo had found a good job at Southern Railroad’s Spencer Shops.

Pernelle missed a school year when her plans to return to Honea Patch for ninth grade didn’t materialize. In 1935, her family moved to Salisbury and a four-room house in Fairview Heights.

The Taggarts joined First Calvary Baptist, and Pernelle became involved in the junior choir, the Baptist Training Union and Sunday School. That September, she enrolled as a ninth-grader at J.C. Price High and graduated in 1940.

Pulling out one of her Price High report cards, Pernelle shows how she especially excelled in math.

Pernelle took baby-sitting and domestic jobs to earn money, though her pay usually was only 50 cents a day or $2.50 a week. A chance meeting one day at the post office with Dr.  Benjamin Whitehead McKenzie, a white physician, led to Pernelle’s being hired to assist him in the office and also do some domestic chores for his wife.

It also set Pernelle on the path to her nursing career. In time, she was changing the dressing on patients’ surgical wounds, keeping office records, and collecting payments, but only at a salary of $5 a week.

“At some point, Dr. and Mrs. McKenzie were so impressed with my ability, energy and willingness to do a job,” Pernelle says, “they began to encourage me to become a nurse.”

Soon, she had successfully enrolled in the Kate Bitting Reynolds Memorial Hospital School of Nursing in Winston-Salem, and she went through three years of schooling among an all-black student body.

In 1943, because of World War II, the U.S. government required nursing students to enroll in the newly created Cadet Nurses Corps, which had an entirely new curriculum and responsibilities.

Pernelle would finally graduate from nursing school in September 1944.

Pernelle became assistant head nurse on the surgical unit in 1946, and the hospital administrator soon asked her to consider take the yearlong course in anesthesiology at McHarry Medical College in Nashville, Tenn.

There was no “Negro” school in North Carolina that offered the training, Pernelle says. She passed her course requirements at McHarry Medical College in March 1948 and returned to Community Hospital as its only nurse anesthetist.

Because of that, she was soon overworked and had to be available day and night and on many weekends. It led to her decision to try Chicago.

Again it was a chance meeting that led to Pernelle’s landing of a job at Cook County Hospital. Not long after arriving in Chicago, she accompanied her friend, a part-time nurse at Cook County General, to the payroll department to pick up the friend’s check.

Until she married Harold Shaw in 1960, Pernelle lived in one of the hospital’s nursing dormitories for 10 years. She and Harold, a decorated war veteran and longtime employee for the General Motors Parts Division in Broadview, Ill., would first rent an apartment, then buy a house where they lived for 43 years.

Through the years, Pernelle kept receiving promotions, though she never asked to return to anesthesiology. She was a staff nurse, a head nurse in Unit 56, the first black supervisor on a day shift, administrative supervisor in the Surgical Nursing Division and assistant director of the division.

From 1954 to 1960, she worked around her full-time schedule and attended night and weekend classes to earn her bachelor’s of science degree in nursing from DePaul University.

In 1955, Pernelle also used her savings to buy R.C. and Emma Taggart a house on Old Concord Road in Salisbury.

After they were both retired, Pernelle and Harold Shaw made fishing one of their passions. They fished in Lake Erie and also at lakes in Minnesota. They liked to visit Arkansas, Harold’s home state, and take a dip in the thermal bath in Hot Springs.

Harold was a good man, Pernelle says. He earned the Bronze and Silver stars and served in both World War II and Korea. As a boxer, he trained once with Joe Louis, and he played professional baseball briefly in the Chicago Negro League.

The couple loved their pet dachshund, Peanut, and made trips to visit family frequently. In retirement, Pernelle says, she took a few sewing classes and read through the entire Bible.

To give you an idea of how much Pernelle is loved, respected and cherished, her family stretched out 95th birthday celebrations for her last August for a whole month. Family members and friends arranged gatherings in her honor in Washington, D.C., and three different places in Illinois.

Pernelle Shaw has always liked and lived by a quote from Abraham Lincoln, who said, “The mind is as content as you want it to be.”

“I just roll with the punches, and I don’t look back,” she says.