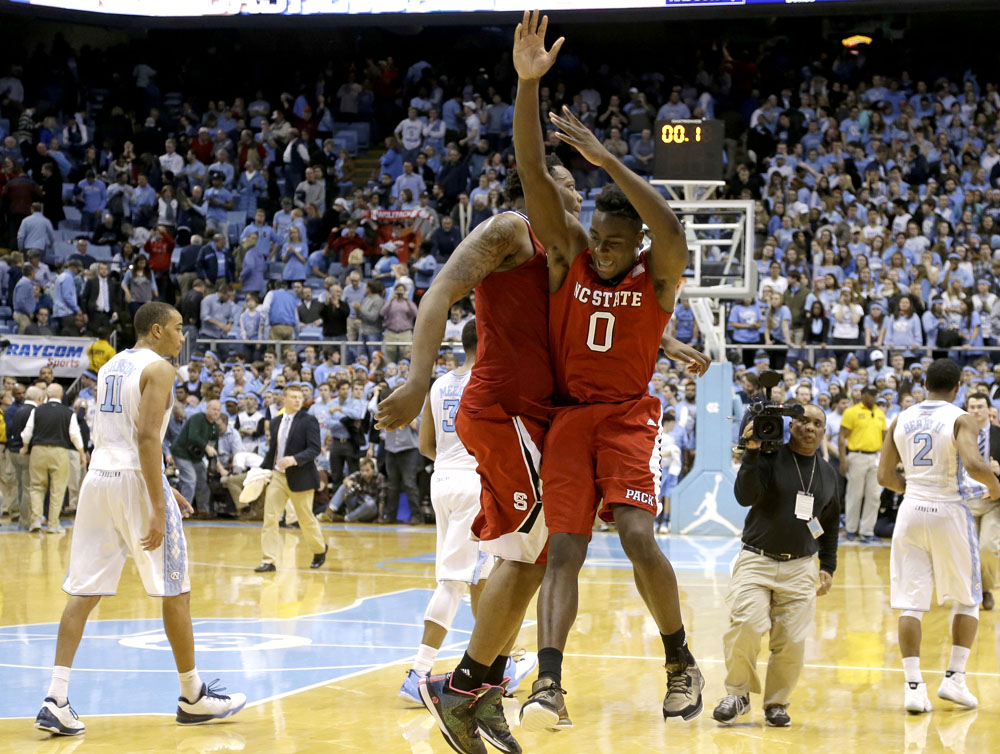 CHAPEL HILL, N.C. (AP) — North Carolina State arrived at North Carolina focused more on getting another road win to help its NCAA tournament chances than trying to end its long drought at the Smith Center.

The Wolfpack ended up taking care of both in impressive fashion.

Trevor Lacey and Ralston Turner each added 14 points for the Wolfpack (17-11, 8-7 Atlantic Coast Conference), who earned a second marquee road victory this month in pursuit of a fourth straight NCAA trip.

“Our focus was just to come in and win,” Lacey said. “It wasn’t make history or none of that.”

N.C. State didn’t shoot particularly well, but it played with toughness and composure while frustrating the Tar Heels (19-9, 9-6) just about all night.

By the end, N.C. State had held UNC to its lowest point total in its nearly three-decade run in the Smith Center. Not to mention beat a Roy Williams-coached Tar Heels team in Chapel Hill for the first time ever.

“I think our guys came in here with a great belief and great confidence in themselves,” N.C. State coach Mark Gottfried said.

UNC had won 17 of 18 meetings overall and hadn’t lost to N.C. State in Chapel Hill since 2003, the season before Williams left Kansas to take over at his alma mater.

N.C. State has been living on the NCAA tournament bubble for a solid month. It followed an upset of then-unbeaten Duke with six losses in eight games and looked sunk, only to follow that with a road upset against top-10 Louisville on Feb. 14 and now another big one.

“It would be easy to think this has made our season and drop the rest,” Turner said. “We just have to be mature about the situation.”

N.C. State led by 11 at halftime then as many as 16 early in the second half. Then, after the Tar Heels ran off 12 straight points to build momentum and erase nearly all the deficit, the Wolfpack hung in and kept just enough control to hang on.

N.C. State: N.C. State shot just 35 percent for the game. … The Wolfpack went 8-for-11 at the line after halftime. … BeeJay Anya had six blocks to lead a strong defensive effort up front.

Williams had been critical of a home crowd that was “asleep” during Saturday’s rout of Georgia Tech. He said this one was “sensational” only to have his team “let them down.”

Turner scored 11 after halftime. That included two 3s at absolutely huge times, one after UNC had closed the gap to 38-36 and the second with N.C. State up 45-41 with about 5½ minutes left.