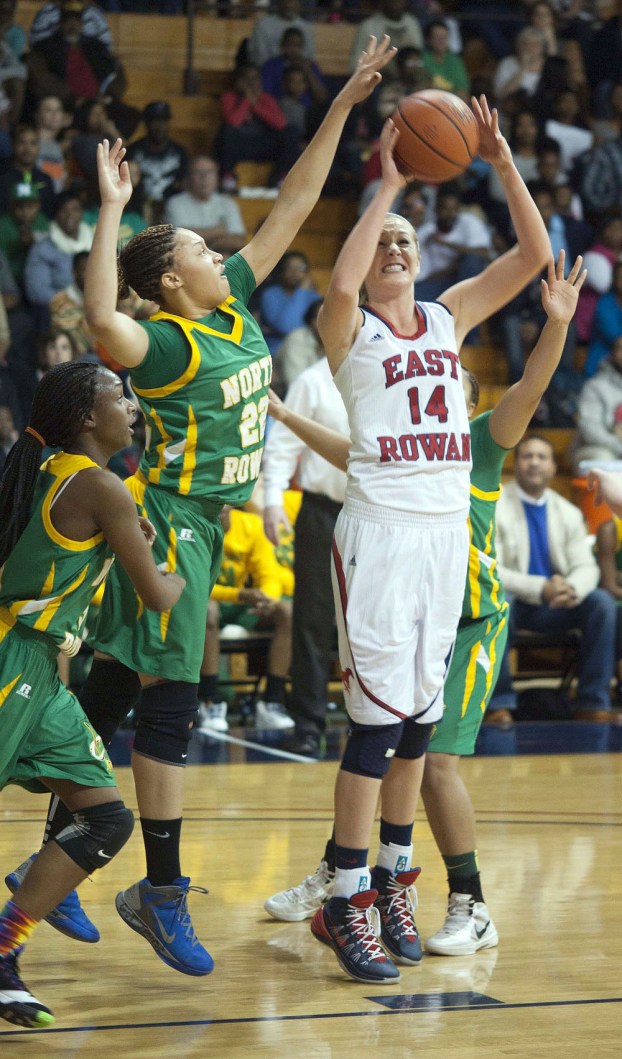 FILE PHOTO BY JON C. LAKEY / SALISBURY POST Brielle Blaire (22), then with North Rowan, goes up to attempt to block Karleigh Wike (14), then with East Rowan, in the girls championship game of the 2014 Sam Moir Christmas Classic. Blaire transferred from Virginia Tech to Texas Tech in January. She must sit out two semesters year before taking the court with the Red Raiders.

Brielle Blaire is 1,400 miles from home, but she’s got something in common with the folks back in Rowan County.

There was white stuff on the ground in Lubbock, Texas, when Blaire woke up Tuesday. She did some slipping and sliding, but she made it to her classes at Texas Tech.

Blaire can’t wait to play basketball for Texas Tech, but her debut is still 10 months away.

“I’ve got to sit out two semesters,” she said. “So it’ll be next December.”

Blaire is one of the more special basketball players to come out of Rowan County, and should be a difference-making wing player for Texas Tech. In high school, Blaire was a four-star recruit and was considered one of the top 75 prospects nationally in the class of 2014.

Blaire was recruited by a lot of people. She signed with Virginia Tech.

During her senior season at North Rowan, Blaire, unfortunately, suffered a torn ACL. The Cavaliers were undefeated and were coming off three wins in the Sam Moir Christmas Classic by an average of 30 points when Blaire went down.

“When I hurt my knee, I didn’t think it was that bad at first, and I told people I’d be back in two weeks,” Blaire said. “It’s turned out to be the longest two weeks of my life.”

North Rowan may have contended for a state title with a healthy Blaire.

She was a big part of Salisbury’s state championship team in 2011. As a freshman, she scored 20 points in the 2A title game against East Bladen and was named MVP.

In three seasons at Salisbury, she scored 1,581 points. She averaged 22.3 points per game as a sophomore and 24.1 as a junior. She was Rowan County Player of the  Year and Central Carolina Conference Player of the Year in 2012  when she led the Hornets to a 25-4 record.

Blaire made the three-mile move to North Rowan for her senior year. She dominated in volleyball in the fall of 2013, but then she had her basketball season cut short by the knee injury.

Blaire has quite a bit going for her. She 6-foot-2 with shooting range, strength and some explosiveness, and she plays with a chip on the shoulder.

That competitive drive pushed her to try to play this season at Virginia Tech, when her knee wasn’t ready for it. She probably should’ve redshirted, but she played in four games for the Hokies and scored 12 points before she decided to transfer.

Blaire finished the academic semester at Virginia Tech but wasn’t sure where she would continue her basketball career. All she was certain of was she was looking for a less structured style of play.

Georgetown or George Washington were rumored destinations when Blaire was home for the Christmas holidays.

The Red Raiders came out of the blue.

“They didn’t recruit me out of high school, but they contacted me after I was released by Virginia Tech,” Blaire said. “I hadn’t thought about going so far away from home, but as soon as I talked to the coach (Candi Whitaker) I knew I wanted to visit. As soon as I visited Texas Tech, I knew it was absolutely the right fit.”

Blaire is enjoying her new surroundings. Her typical day starts at 8:30 a.m.

“Well, it’s school, basketball practice and rehab,” Blaire said. “I can do some things with the team, other things I do separate from the team. I lift heavier than the team does because they’re playing games.”

Texas Tech is 15-12. For the second semester of the 2015-16 season, the Red Raiders should get a boost from a healthy Blaire.

“My knee is actually feeling fine,” Blaire said. “But an ACL is tough,and you have to get past the mental part as well as the physical part. By December, I’ll be able to just play ball without thinking about the knee.”

The 2015 basketball postseason took another postponement on Wednesday. With the area expecting snow to start in the early evening... read more