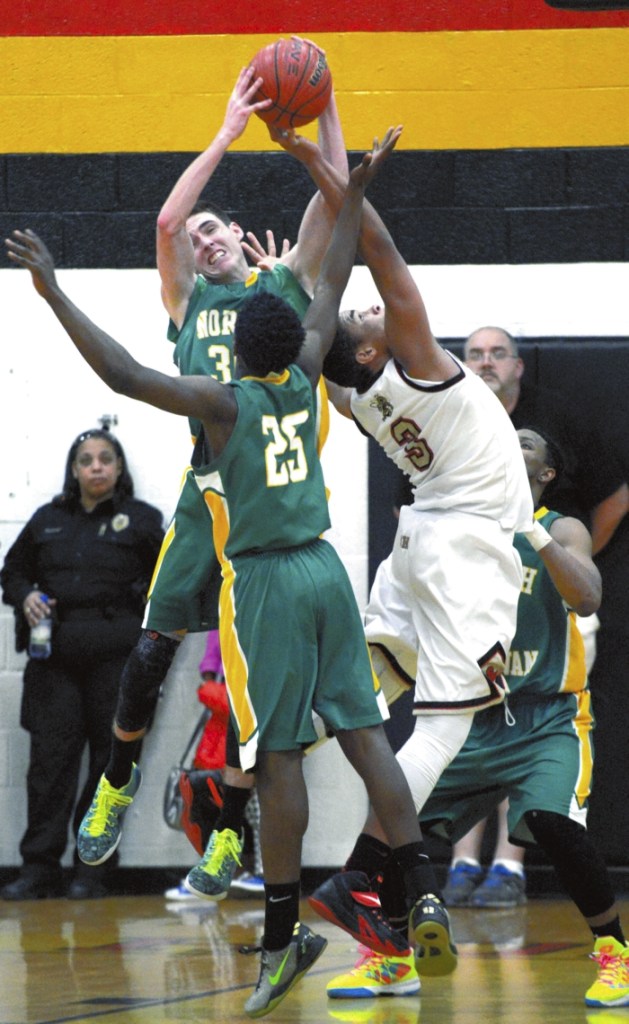 WAYNE HINSHAW/FOR THE SALISBURY POST Salisbury’s D.J. Alexander (3) and North Rowan’s Henderson Lentz (30) and Alonzo Sirleaf (25) fight for a rebound in an earlier game this season. The two arch-rivals face off again tonight in the first round of the state playoffs at North.

Back in October, North Henderson volleyball coach Sue Moon brought a talented team to Carson and beat the Cougars in the first round of the 3A state playoffs. North Henderson won two more matches after that before losing to Marvin Ridge in the regional final.

On Tuesday, the North Henderson Knights will try to duplicate their volleyball success in Rowan County. They’ll be traveling a handful of miles past Carson to battle the East Rowan Mustangs as the state basketball playoffs begin.

Marsh,  a 5-foot-11 sophomore, is one of the state’s top volleyball players. She and Brackett will try to contain the Mustangs’ 6-3 Kelli Fisher, a UNC-Asheville signee, inside.

Seniors Petree and Caldwell give North Henderson a lot of guard experience. Petree is an outstanding athlete. She’s good in basketball and volleyball, but she has signed with Presbyterian to play softball.

North Henderson plays a lot  of games in the 40s and won its most recent game, 49-45. East Rowan will try to speed things up with the flying Pharr twins, Shenell and Shenique. Shenell Pharr is East Rowan’s No. 2 scorer.

East Rowan has won nine of its last 10 but hasn’t won in the playoffs since 2008.

Asheboro (14-10) is coached by veteran Terry Allmon, who is well-known to Rowan County basketball fans. Allmon coached East Davidson powerhouses against Salisbury a few years ago when those two schools were annually among the best 2A teams in the state.

This season, Asheboro competed well against Southwestern Randolph and Ledford in the Mid-Piedmont Conference. Four of the Comets’ 10 losses were to those two, but three of the four were tight.

Senior Mikayla Trogdon and junior Breanna Foster lead the Comets. Both are 5-10.

UNC Pembroke signee Avery Locklear, the leading scorer in school history, Cassidy Chipman and Sylvetta Bost lead the Raiders (17-6). Like almost all of their teammates, they are seniors.

North Rowan’s girls (13-6) have had an unusual season. They only played 19 games — many played 23 or 24 — so they didn’t get to drop non-conference losses for seeding purposes. The Cavaliers also have had their full roster intact for only a handful of games, mostly due to injuries, but also due to disciplinary action.

But if everyone’s  healthy and on the same page, this is a team that could be the last one standing in Rowan County as the playoffs unfold. This is a quick, aggressive squad that can cause plenty of problems with defensive pressure.

North Rowan hasn’t lost to anyone who’s not strong. Two losses were to East Davidson and one was to 4A R.J. Reynolds, and those two are still undefeated. One loss was to 4A  Ardrey Kell. One loss was to 1A power Winston-Salem Prep. The other loss was a close one to East Rowan in the Sam Moir Christmas Classic championship game.

Forbush (14-10) will be traveling from Yadkin County. The Falcons have dropped their last two games, but they’ve played well (6-4) on the road.

North Rowan’s girls should benefit from  the large crowd that will be gathering to watch the Salisbury-North Rowan boys contest that will be the nightcap of a doubleheader in Spencer.

When these rivals get together, it would be a big deal even if they were both 0-20.

The Hornets (15-9)  have a major size advantage with Wes Fazia, Tre Oats and D.J. Alexander up front and they have a dynamic guard in Deshawn Troutman. What this group hasn’t been able to do is beat North Rowan. The Cavaliers (16-5) have won eight straight meetings the last three seasons.

Both teams are young. The Hornets’ core group has been around a long time, but they are still only juniors. Junior Jalen Sanders and sophomores Joseph Scott and Henderson Lentz are the scorers for the Cavaliers. Josh Handy, a junior who is North Rowan’s No. 2 scorer, was hurt (wrist) in Friday’s game at Lexington.

West Rowan has lost three in a row — to the SPC’s top three — but you can never count out a Mike Gurley-coached team in the playoffs.

Weddington’s star, senior guard Jordan Barber, was a freshman starter on the Weddington team that lost 69-66 in overtime to West Rowan three seasons ago.

Carson closed the regular season with four straight losses, but it’s not as hopeless a matchup as the seedings suggest.

Carson is capable of playing really well on the defensive end and beat SPC co-champ Cox Mill once and West Rowan twice.

Carson also has the fond memory of going on the road and beating the No. 1 seed in  3A (Asheville Erwin)  in the second round last season when no one gave the Cougars a chance.

Ledford has exceptional players in Skylar McGee, a 6-foot-5 shooter and hard-driving 5-11 guard Brandon Rothrock. Both average better than 19 points per game.