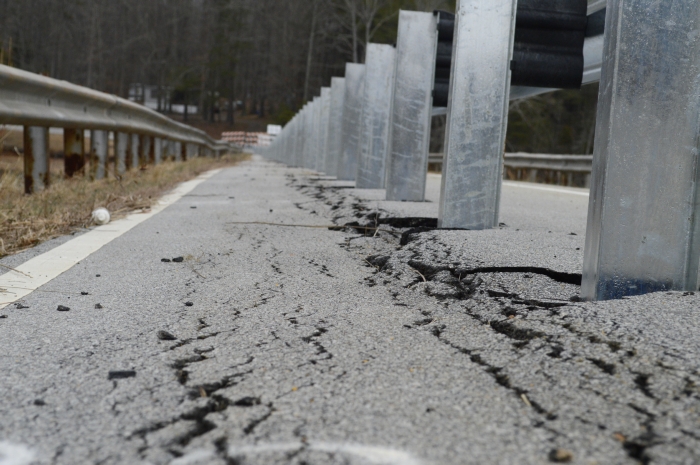 Josh Bergeron / Salisbury Post file photo - Cracks in the pavement span the length of St. Matthews Church Road, which is scheduled for a re-opening at the end of February. The road has been closed for over a year.

After more than a year of detours, the N.C. Department of Transportation’s deadline for completing a limited re-opening of St. Matthews Church Road over High Rock Lake is only a week away.

The road was closed in September 2013 after the Department of Transportation discovered cracks in the causeway’s pavement. An investigation last year found that the foundation of the 85-year-old causeway was crumbling. The causeway needed to be widened to support the traffic volume, the investigation found, but the state’s board of transportation approved a temporary re-opening of the road at a cost of $200,000. The temporary project will limit traffic to one lane. The estimated deadline at the time of the project’s approval was the end of February.

With the temporary opening, only local and emergency traffic would be allowed on the St. Matthews Church Road causeway. Two traffic signals are scheduled to be installed to allow both east- and west-bound traffic to use the causeway. Road sensors would tell the stoplights when to change colors. Lights wouldn’t change until the last car crosses the bridge.

As of Monday, a new guardrail had been installed along with new lane markings.

Dozens of painted measurements also dot the pavement. Cracks in the road remain. Just outside of the newly installed guardrail, small holes have formed where the rail’s posts were placed.

A permanent fix is estimated to cost $3.2 million and hasn’t yet been funded. Plans for a permanent solution have already been approved.