Cal Thomas: Giuliani talks of love instead of policy 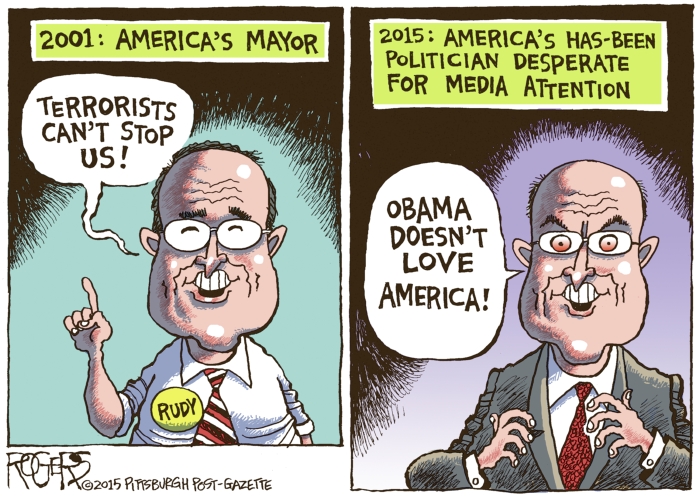 Rudy Giuliani, the former mayor of New York City, is taking some heat — and winning praise in some quarters — for remarks he made at a private dinner last week at which he questioned President Obama’s love for America.

Speaking at Manhattan’s upscale “21 Club” at a gathering of economic conservatives hosting potential Republican presidential candidates (Wisconsin Gov. Scott Walker attended this one), Giuliani said: “I do not believe, and I know this is a horrible thing to say, but I do not believe that the president loves America. He doesn’t love you. And he doesn’t love me. He wasn’t brought up the way you were brought up and I was brought up through love of this country.”

The White House fired back, agreeing with Giuliani that it was a horrible thing to say.

Giuliani refused to retract his comment in several subsequent TV interviews, but he added that the president seems to spend more time apologizing for America and criticizing the nation he was twice elected to lead than he does praising it. That is legitimate commentary, but questioning the president’s love for America is not.

This recalls the debate over the Vietnam War in the late 1960s and early ‘70s. Supporters of that war said anti-war protesters didn’t love America because they were opposed to the policies of President Lyndon Johnson and later President Richard Nixon. “America, Love it or Leave it” became their favorite slogan. Bumper stickers stamped with that sentiment — some printed in red, white and blue — were attached to pickup trucks with gun racks and Confederate flags, as well as luxury cars. If you didn’t support the president in wartime, you were accused of undermining the country and not loving it as much as those who did support him.

For some this smacked of idolatry.

“My country, right or wrong” is a sentiment long attributed to Commodore Stephen Decatur, one of the fathers of the U.S. Navy. According to American Thinker, in 1804, he led an expedition that succeeded in freeing sailors aboard the USS Philadelphia, which had been seized by Barbary pirates off Tripoli. After scuttling the ship, Decatur later set sail for North Africa in command of nine ships that effectively destroyed the pirates’ operations and resulted in a treaty.

On returning home in 1816, Decatur was celebrated as the Conqueror of Araby. At a banquet in his honor he said, “Our country! In her intercourse with foreign nations, may she always be in the right; but right or wrong, our country!”

It sounds noble and arouses patriotic fervor in many hearts, but when a country is wrong — as in its prosecution of the Vietnam War and, it would appear, in Iraq — it doesn’t weaken it to say so. But in saying so, the admission and the motivation must be for the purpose of improving and strengthening the country, not belittling it, or saying that we as a nation have failed “to live up to our ideals,” which President Obama has said.

There is — or ought to be — a difference between jingoistic expressions of love for America and the kind of love that can admit error while celebrating the virtues that make people want to come here.

We should have a debate on what has made America great and worth loving and not on whether the president loves the country. Debate the president’s policies, yes. Ascribing motives to him gets us nowhere.

Cal Thomas’ latest book is “What Works: Common Sense Solutions for a Stronger America” is available in bookstores now.